Asked to denounce the deluded fringe on CNN, the rising GOP star blamed Obama for their rage -- and then recanted 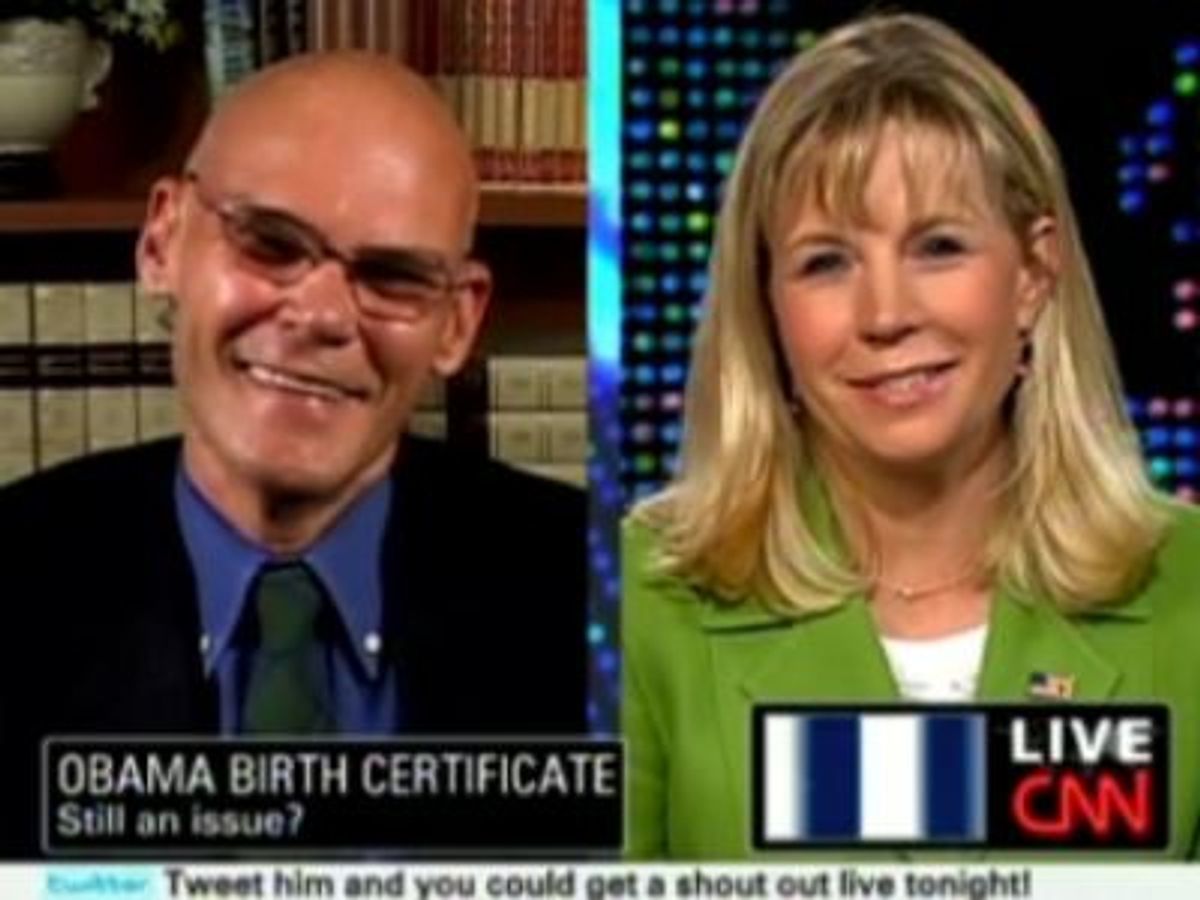 You'll have to see it to believe it, and the video isn't up yet (Update: Now it is, and it's at the bottom of this post). But Tuesday night on CNN's "Larry King Live," rising GOP shill/star Liz Cheney refused to denounce the "Birthers" -- the right-wing fringe movement devoted to denying (for a changing array of reasons) that Obama is eligible to be president. Instead, Cheney defended the Birthers by blaming Obama for their rage.

I wasn't planning to blog so I took notes in real-time, and I can't promise Cheney's quote is verbatim. But she said the same thing twice, so I'm confident I caught her drift. After King showed video of the crazy birther who disrupted a meeting with poor GOP Rep. Mike Castle, demanding he acknowledge Obama was born in Kenya (that's one birther claim); and after Carville denounced them as a "poor, pathetic" fringe group, King gave Cheney a chance to distance herself from them. But Cheney demurred, telling King the Birther movement exists because "People are uncomfortable with a president who is reluctant to defend the nation overseas."

The rarely shocked Carville seemed briefly speechless, and even King, not known to be the most combative interviewer, tried a second time to get an honest reaction from Cheney -- which I read as expecting her to separate herself from the crazies. But Cheney repeated her talking point about Obama inadequately defending the nation overseas. Unbelievable. Carville called her on it, accurately: "She refuses to say, 'This is ludicrous,' because she actually wants to encourage these people to believe this."

Now, I've debated Cheney, so I know she'll do anything from rudely interrupting to lying to make her point, but even I expected her to take King's opportunity to distinguish her brand of Republicanism from the hooligans who run with the Birthers. But she didn't. Wow.  The GOP keeps coughing up younger, supposedly more compelling, "new" leadership, from Sarah Palin to Mark Sanford to, now, Liz Cheney -- and they keep making clear they're not ready for prime time. It's remarkable.

Look for Cheney to try to "clarify" her remarks in the next few news cycles, but she made her true colors clear on CNN tonight, and they're even uglier than I thought.

Update: I love being right! Politico's Ben Smith wrote about my blog post, and asked Liz Cheney if she wanted to clarify her remarks. Cheney emailed this statement:

I don't have any question about Barack Obama's right to be President of the United States.

My concern is with his policies. I am deeply troubled about the path he is taking this country down -- massively expanding the size of government, weakening our national defenses, increasing taxes on all Americans and nationalizing health care. These are dangerous policies for the nation.

Cheney basically proved Carville right: By refusing to denounce the Birthers on CNN, then issuing a mealy-mouthed statement that she doesn't question Obama's right to be president, Cheney has it both ways: She curries favor with the Birthers and but affirms her basic sanity (if not integrity) to the Beltway media.

Several people in my letters made a point I wish I had: It's rich of Liz Cheney to talk about Obama refusing to defend the country, when her father famously got five deferments from Vietnam service because, in his own words, he had "other priorities."

Watch the video, below, and remember that Cheney now says she has no question about Obama's right to be president. It would have been simple to toss that in and still make her other points, but Cheney didn't bother. Why is this woman still on TV?