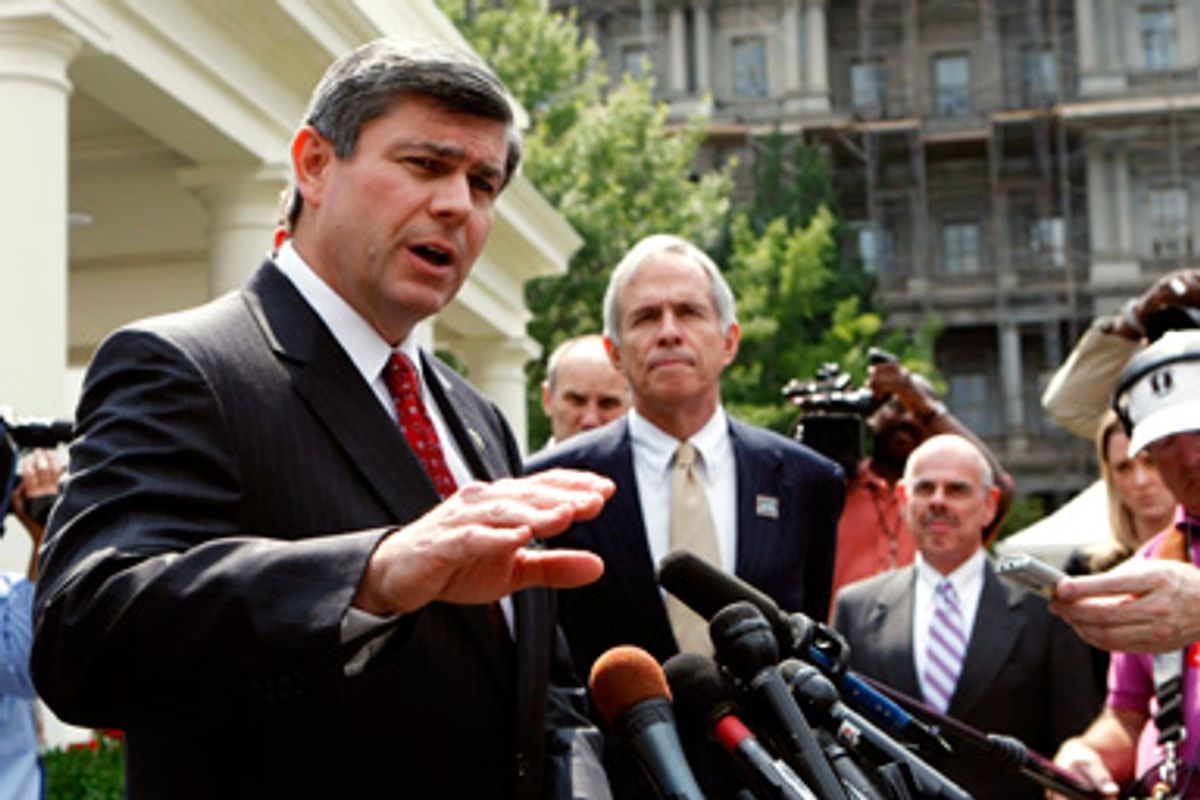 Congressman Mike Ross, L, (D-Ark.) speaks to reporters after he and a group of fellow Democratic Congressmen met with U.S. President Barack Obama about overhauling the healthcare system at the White House in Washington July 21, 2009.
--

Nobody could be better positioned than the Democrats who call themselves "Blue Dogs" to sabotage healthcare reform, the primary objective of their president and the signature issue of their party for more than 60 years. Thanks to fawning publicity in the mainstream media that persistently describes them as fiscally conservative and ideologically moderate, the Blue Dogs enjoy an almost unassailable position in the middle of Washington's stunted political spectrum.

Certainly the Blue Dogs are astute players of the game, their power enhanced by their willingness to echo Republican rhetoric while enjoying the perks and prerogatives of Democratic power. But this is a cynical group indeed, whose reputation for fiscal probity is grossly inflated -- and whose loyalty to corporate interests, over and above the priorities of their party and the welfare of their constituents, is a darkening stain.

What supposedly troubles the Blue Dogs these days is the estimated cost of healthcare reform. By their calculations, a trillion dollars over 10 years represents an unsustainable expenditure, even if the program succeeds in providing universal quality coverage. The chairman of the Blue Dog healthcare task force, Rep. Mike Ross, D-Ark., has repeatedly threatened to kill any reform bill that increases the deficit. "We have to take steps to hold healthcare costs to the rate of inflation, or we will never balance our federal budget again, and health insurance costs will continue to become less and less affordable for the American people," he said last week.

Holding healthcare costs to the rate of inflation is a laudable if unlikely goal for Ross and his fellow Blue Dogs, but the simple fact is that their concern over costs and deficits is highly selective -- and their claim to fiscal conservatism is utterly unearned. That should be instantly obvious to anyone who glances at the Mike Ross House Web site, where all of his puffery about holding down the deficit and saving taxpayer money gives way to his boasting about the pork he brings home to Arkansas. His most recent spate of news releases touts earmarks adding up to $66 million, mostly in the House Energy and Water appropriations bill. (If every member of Congress snatched that amount, the total would far exceed $300 billion, by the way.) That doesn't include the $87 million that Ross claimed for Arkansas to weatherize homes and schools, courtesy of the president's stimulus legislation.

Chances are that the river and port improvement projects forming the bulk of the Ross earmarks are perfectly legitimate -- and that may well be true of most of the earmarks that the other Blue Dogs regularly grab for their home districts. But who knows? When talking to Washington reporters they proclaim their single-minded dedication to fiscal prudence; when talking to the home folks, they brag about their skill at pork barreling. So as sentinels of the public treasury, they have about as little credibility as the Republicans who used to control Congress.

If the Blue Dogs were truly worried about wasteful spending, they might use their influence to curb the outrageous looting of the federal Treasury by defense contractors, which remains by far the largest drain on the public purse. They might have spoken out against the brazen theft of billions of dollars by private contractors in Iraq, whose thievery harmed troops as well as taxpayers. They might have cautioned against squandering hundreds of billions of dollars on programs that don't work and probably never will, from the F-22 jet fighter to the Ballistic Missile Defense System.

Yet with precious few exceptions, the Blue Dogs whisper nary a word against military extravagance. If they are like Ross, they mindlessly endorse the expansion of virtually any and all military programs, simply because some of those dollars end up in their districts. At a time when the Pentagon's annual cost overruns approach $300 billion a year -- dwarfing the entire defense budgets of most developed countries -- these "fiscal watchdogs" simply have nothing useful to say on the subject. Their silence is regularly shamed, or should be, by the efforts of Sen. John McCain, R-Ariz., an actual conservative who at least tries to trim around the fattiest edges of the defense budget.

If the Blue Dogs aren't really worried by wasteful spending, then what do they find so troubling about the prospect of change in healthcare? The unflattering answer, which may be found in a study just released by the Center for Public Integrity, is money. Corporate interests are showering dollars on the Blue Dogs and their political action committees in record amounts. The center's analysis of the latest campaign financial data shows that well over half of the Blue Dog PAC's million-dollars-plus over the past six months came from three industries -- energy, finance and healthcare. Much the same pattern pertains to the individual PACS maintained by Ross and the other Blue Dog leaders. These pooches heel when the lobbyists whistle.

But why would we expect anything else from them?

Let's recall that the founder of the House Blue Dog caucus -- and still a guiding mentor to its members -- is Billy Tauzin, a Democrat from Louisiana who helped start the group in 1994 and then jumped ship to the Republicans a year later. Just months before he retired from Congress in 2005, he pushed through the Medicare prescription drug bill, guaranteeing hundreds of billions in waste and enormous profits for the drug companies.

As soon as he left Congress, Tauzin became the chief lobbyist for the Pharmaceutical Research and Manufacturers of America, where he makes sure the Blue Dogs never get carried away with any of that rhetoric about fiscal prudence or holding down costs -- by writing generous checks.