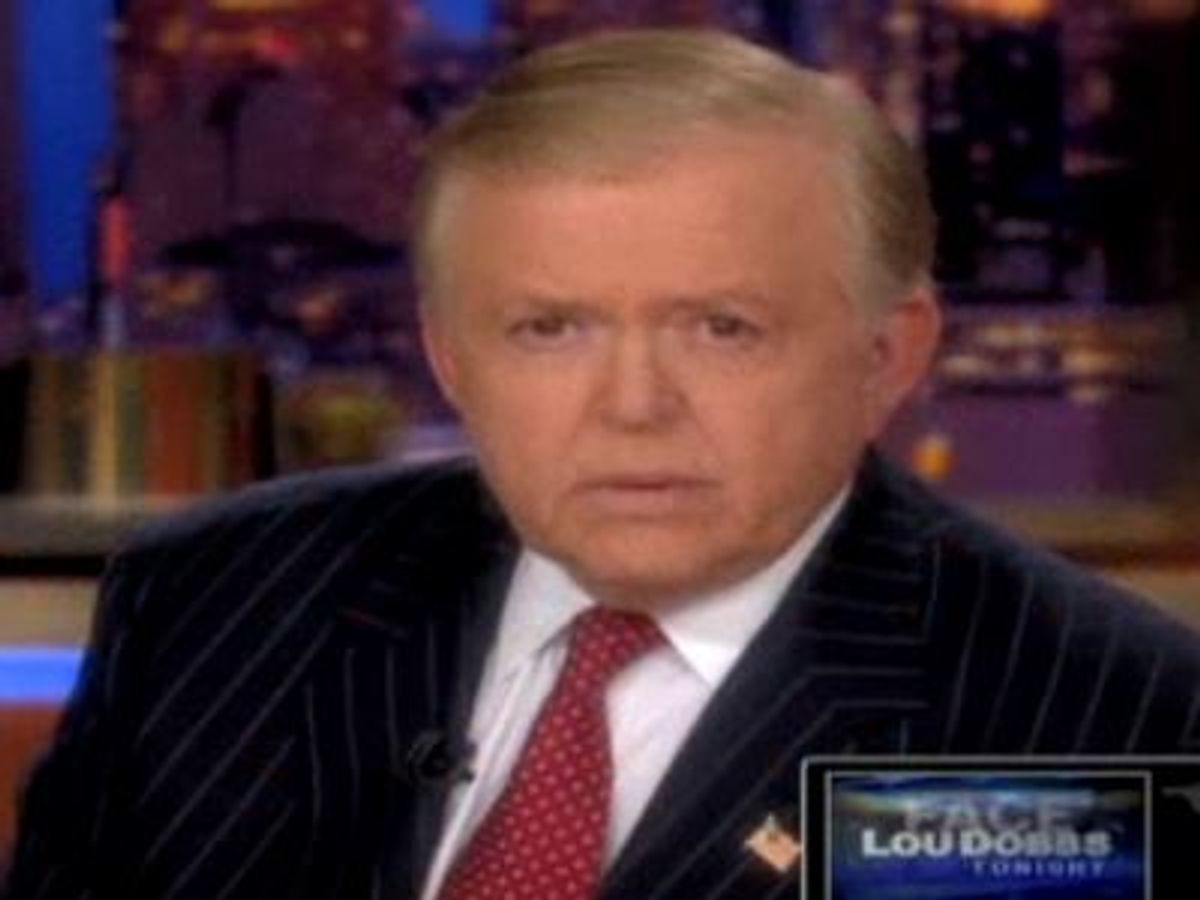 Seems like CNN executives have finally spoken up on Lou Dobbs' embrace of Birtherism. TVNewser is reporting that CNN/U.S. President Jon Klein e-mailed some of the staffers from Dobbs' show before it aired Thursday night to say, "[I]t seems this story is dead -- because anyone who is not convinced doesn't really have a legitimate beef."

I've contacted a CNN spokeswoman for comment, and will update this post if and when I hear back, but in the meantime the report looks trustworthy, as TVNewser has what it says is the actual e-mail from Klein:

I asked the political researchers to dig into the question "why couldn't Obama produce the ORIGINAL birth certificate?"

This is what they forwarded. It seems to definitively answer the question. Since the show's mission is for Lou to be the explainer and enlightener, he should be sure to cite this during your segment tonite. And then it seems this story is dead - because anyone who still is not convinced doesn't really have a legitimate beef.

*In 2001 - the state of Hawaii Health Department went paperless.*Paper documents were discarded*The official record of Obama's birth is now an official ELECTRONIC record Janice Okubo, spokeswoman for the Health Department told the Honolulu Star Bulletin, "At that time, all information for births from 1908 (on) was put into electronic files for consistent reporting," she said.

Dobbs basically followed the letter of Klein's e-mail in his Thursday night broadcast, but he didn't really adhere to the spirit of it. His presentation of the facts at hand suggested he was skeptical, and he continued to make some obviously inaccurate claims.

"President Obama promised transparency and openness in his administration. Yet he's chosen not to release his original birth certificate or a copy of it," Dobbs said. "Meanwhile, the state of Hawaii says it can't release a paper copy of the president's original birth certificate because they say the state government discarded the original document when the health department records went electronic some eight years ago."

In fact, the segment has actually fueled additional conspiracy theories -- unofficial Birther headquarters World Net Daily has posted it on its Web site, and bloggers are claiming a contradiction between what Dobbs reported and previous statements by Hawaiian officials.

For the record, there is no such contradiction.

A statement from October of last year from the Hawaii Director of Health Chiyome Fukino says, "I ... along with the Registrar of Vital Statistics who has statutory authority to oversee and maintain these types of vital records, have personally seen and verified that the Hawaii State Department of Health has Sen. Obama's original birth certificate on record in accordance with state policies and procedures." (Notice the lack of any wording to indicate that what they saw was a paper copy.)

Klein's information came from a June Honolulu Star Bulletin article about the state's procedures regarding birth certificates. The article actually refutes all of Dobbs' claims -- including the ones he made Thursday night -- as well as many of the claims made by the Birther movement generally.

The article quotes Hawaii Health Department spokeswoman Janice Okubo as saying the department "does not have a short-form or long-form certificate .... [What Obama released] is the same certified copy everyone receives when they request a birth certificate."

Update: A CNN spokeswoman has confirmed to Salon that the e-mail printed by TVNewser is authentic. But, the spokeswoman said, Klein's e-mail was not intended to rule out coverage of the story altogether; "new developments ... new additions, new information, new events," can be covered.

In an interview with the Los Angeles Times' Matea Gold, Klein said essentially the same thing, telling her, "Certainly if there are future news pegs, then we have to take that story as it comes."

Gold also has some reporting from inside the network, about concerns on the part of Dobbs' staff about their show's coverage of the issue.

"Some of Dobbs' staff at CNN have told him and network executives that they are uncomfortable with his persistent focus on the story," Gold writes. "Dobbs pushed his producers to run another segment on the story July 17, a day he was off the air, that would feature two figures behind the Obama alien-birth campaign.

"His staff went ahead with the piece, but they wrote a script that called the rumors of the president's foreign birth 'the discredited rumor that won't go away.'"