Obama speaks out on Gates controversy

The president has called the professor and the arresting officer, and clarified his original remarks 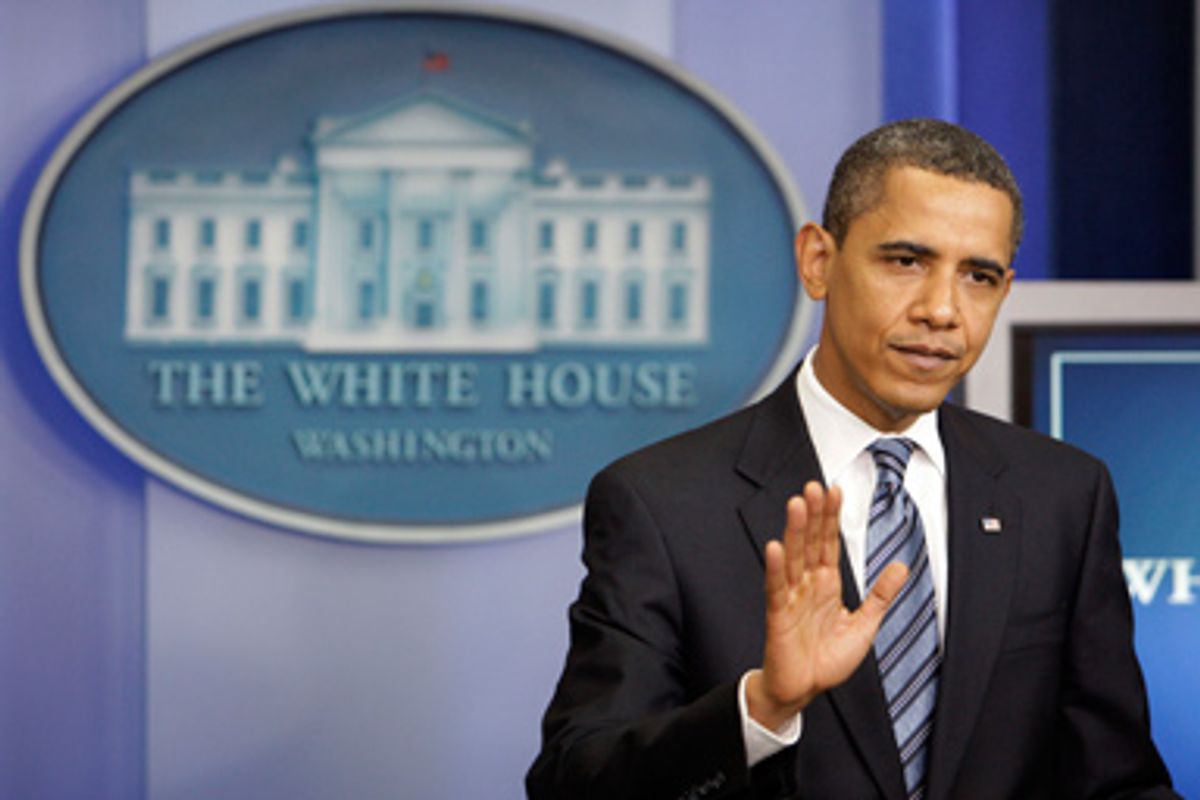 President Barack Obama pauses as he talks to the media in the briefing room at the White House in Washington, Friday, July 24, 2009.
--

In her post on the tempest over President Obama's comments about the arrest of Harvard Professor Henry Louis Gates, Jr., Joan Walsh wrote, "[W]e might need a brief follow-up to Obama's Philadelphia race speech before we're through. Nobody is stepping up to defuse this conflict; there's mainly been escalation."

Apparently, the president agreed. He made a surprise appearance at the regular White House press briefing Friday afternoon to discuss the arrest and his previous comments. In his remarks, Obama said he'd called Sgt. James Crowley, the arresting officer, and spoken with him. He made some attempts to tamp down the furor, saying his impression of Crowley is that he's "an outstanding police officer and a good man" and that he'd talked with him about the three men -- Crowley, Gates and Obama -- having a beer together in the White House.

A transcript of the president's full statement as released by the White House is below, as is video of his remarks.

I wanted to address you guys directly because over the last day and a half obviously there's been all sorts of controversy around the incident that happened in Cambridge with Professor Gates and the police department there.

I actually just had a conversation with Sergeant Jim Crowley, the officer involved. And I have to tell you that as I said yesterday, my impression of him was that he was a outstanding police officer and a good man, and that was confirmed in the phone conversation -- and I told him that.

And because this has been ratcheting up -- and I obviously helped to contribute ratcheting it up -- I want to make clear that in my choice of words I think I unfortunately gave an impression that I was maligning the Cambridge Police Department or Sergeant Crowley specifically -- and I could have calibrated those words differently. And I told this to Sergeant Crowley.

I continue to believe, based on what I have heard, that there was an overreaction in pulling Professor Gates out of his home to the station. I also continue to believe, based on what I heard, that Professor Gates probably overreacted as well. My sense is you've got two good people in a circumstance in which neither of them were able to resolve the incident in the way that it should have been resolved and the way they would have liked it to be resolved.

The fact that it has garnered so much attention I think is a testimony to the fact that these are issues that are still very sensitive here in America. So to the extent that my choice of words didn't illuminate, but rather contributed to more media frenzy, I think that was unfortunate.

What I'd like to do then I make sure that everybody steps back for a moment, recognizes that these are two decent people, not extrapolate too much from the facts -- but as I said at the press conference, be mindful of the fact that because of our history, because of the difficulties of the past, you know, African Americans are sensitive to these issues. And even when you've got a police officer who has a fine track record on racial sensitivity, interactions between police officers and the African American community can sometimes be fraught with misunderstanding.

My hope is, is that as a consequence of this event this ends up being what's called a "teachable moment," where all of us instead of pumping up the volume spend a little more time listening to each other and try to focus on how we can generally improve relations between police officers and minority communities, and that instead of flinging accusations we can all be a little more reflective in terms of what we can do to contribute to more unity. Lord knows we need it right now -- because over the last two days as we've discussed this issue, I don't know if you've noticed, but nobody has been paying much attention to health care. (Laughter.)

I will not use this time to spend more words on health care, although I can't guarantee that that will be true next week. I just wanted to emphasize that -- one last point I guess I would make. There are some who say that as President I shouldn't have stepped into this at all because it's a local issue. I have to tell you that that part of it I disagree with. The fact that this has become such a big issue I think is indicative of the fact that race is still a troubling aspect of our society. Whether I were black or white, I think that me commenting on this and hopefully contributing to constructive -- as opposed to negative -- understandings about the issue, is part of my portfolio.

Update: Obama has now called Gates as well, and the White House has e-mailed reporters a brief summary of that conversation. "The President called and connected with Professor Gates at 3:15 this afternoon," it reads. "They had a positive discussion during which the President told Gates about his call with Sgt. Crowley and statement to the media. The President also invited Gates to join him with Sgt. Crowley at the White House in the near future."