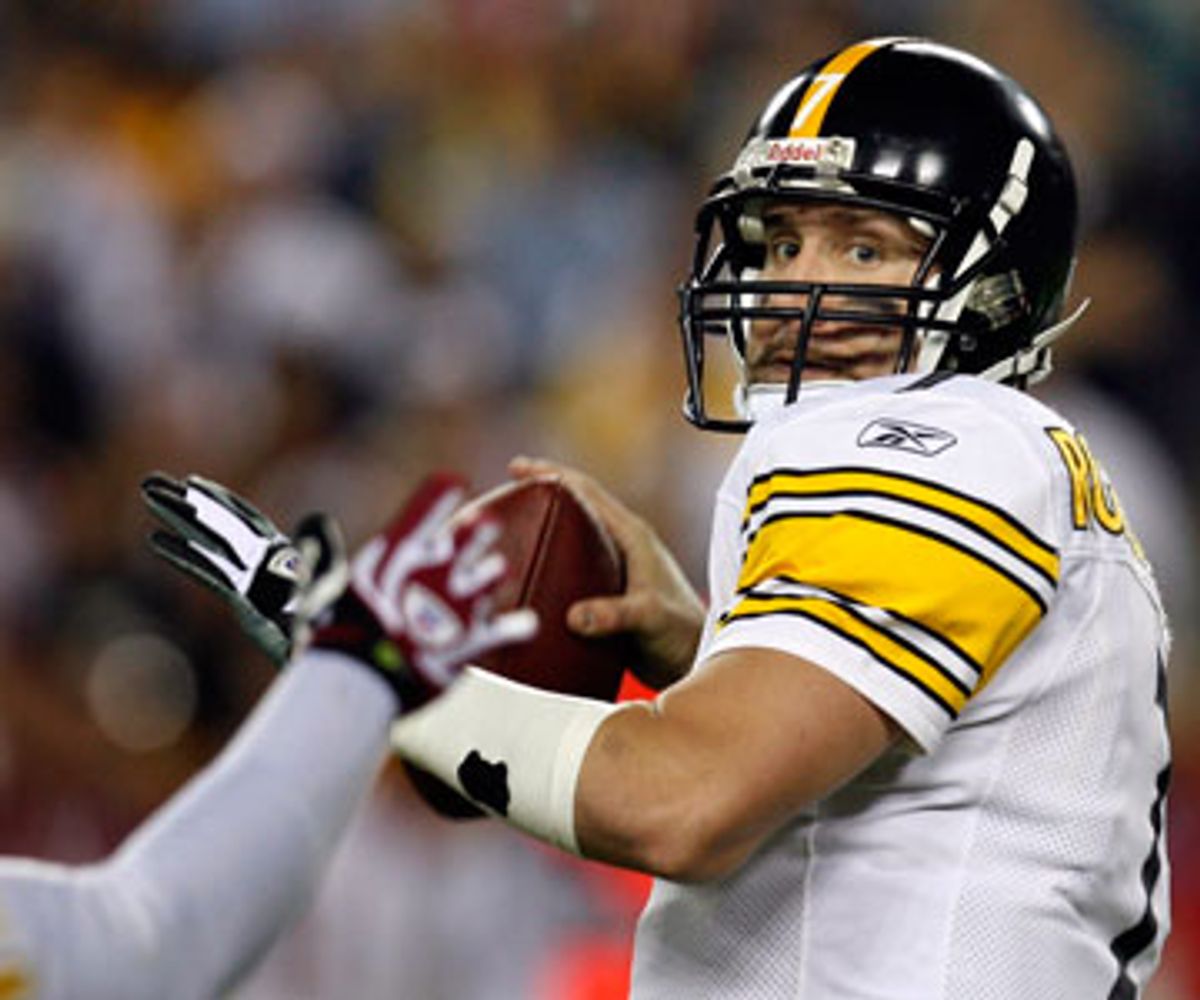 On Wednesday evening, 36 hours after the Associated Press reported that Pittsburgh Steelers quarterback Ben Roethlisberger has been accused of rape in a civil suit, "world leader" in sports news ESPN finally decided to mention it. Prior to that, says USA Today, "ESPN instructed its employees not to report the Roethlisberger news, based partially on the fact that no criminal complaint had been filed. Said ESPN news director Vince Doria to the Wall Street Journal, 'We don't think it meets our standard of reporting.'" I'm not too good at impressions, but here's my best Seth Myers/Amy Poehler for you: Really, Vince Doria? Really?!?

Mike Florio at the NBC Sports Web site comes right out and says it: "[W]e're convinced that the Roethlisberger story initially was ignored due to concerns that ESPN would be jeopardizing its access to the two-time Super Bowl-winning quarterback, who also happens to play for the team with the most loyal and rabid fan base in America." In a must-read post, "This Is What Rape Culture Looks Like," Jaclyn Friedman, co-editor of "Yes Means Yes: Visions of Female Sexual Power and a World Without Rape," explains how that decision is one of many examples of how our culture fails to discourage rapists or support victims. "When our media won't talk about rape, people think it doesn't happen, and the rapists face no consequences. That emboldens rapists."

Want some other examples? This case provides a sickening number of them, and Friedman lays many of them out. According to the suit, when the plaintiff, Andrea McNulty -- an employee of a Lake Tahoe Harrah's casino hotel where the rape allegedly took place -- reported the crime to Harrah's security, she was told not only that they wouldn't be investigating, but that "most girls would feel lucky to get to have sex with someone like Ben Roethlisberger." (Yeah, maybe they would. That's one of the reasons why we angry feminists are always pointing out that rape is not sex.) Says Friedman: "That's rape culture. When people in power refuse to take women's rape charges seriously, it means there are no consequences for rapists, which makes them more free to rape."

And later, the same security chief who told McNulty she should feel lucky allegedly got her keys from her parents so he and other Harrah's employees could enter her home without consent and erase files from her computer. Friedman: "That's rape culture. When authorities use their power to deliberately silence rape victims instead of helping them find justice, it not only leaves rapists free but intimidates other victims from coming forward."

Ostensibly, ESPN's decision not to report on the case at first was because no criminal charges have been filed -- and indeed, when they did report on it, they led with that point. Never mind that "Her lawsuit says she didn't file a criminal complaint because she feared Harrah's would side with Roethlisberger -- a friend of the hotel-casino's regional president John Koster -- and she would be fired." (Psst, that's rape culture.) Or that 60 percent of sexual assaults are not reported, in part because if they are, the Rape, Abuse and Incest National Network estimates, only about 16 percent of reports will lead to a conviction.

Meanwhile, Friedman notes that the ever-charming Perez Hilton has already put forth the theory that the alleged victim might just be a lying golddigger, an assertion we're likely to hear many, many more times as the story unfolds. No doubt that's the reasoning behind zeroing in on the lack of criminal charges; instead of trying to put the rapist in jail, she went after his money? But here's the thing: Regardless of whether she's lying, this whole story is still a nauseatingly perfect illustration of all the ways in which real victims are silenced, intimidated, smeared, disbelieved and bullied, while men accused of rape are given the benefit of the doubt at every turn. Again, Friedman nails it:

As this woman's case proceeds, her body, her actions, her mental state, motives and her history will be put on public trial in a way that would never happen if she were accusing someone of kidnapping or attempted murder. That's rape culture. When women are too afraid of being re-victimized by the courts and the media to come forward, and when the public gets the message that women who accuse men of rape are lying or did something to deserve it, the cycle continues.

Meanwhile, Roethlisberger's lawyer is telling journalists, "Ben has never sexually assaulted anyone; especially Andrea McNulty." Especially her? How the hell do you especially not rape someone? "These other women, I merely did not rape, but that one I extra super double did not rape!" Huh? Oh wait, I think I get it. I've got a dollar that says we're about to find out that he doesn't deny having sex with her, but she wanted it. And we all know most girls would feel lucky to get to have sex with Ben Roethlisberger, and men totally only rape when they can't otherwise get laid, so why would he need to rape this one? Another dollar says the "especially" means we're also about to hear that, dude, she's not even that hot -- the same defense Kobe Bryant used -- and nobody ever rapes ugly women, so there you go. It's her word against his, and really, who are you going to believe? The guy's a national treasure. The woman's just somebody willing to subject herself to public humiliation and intense scrutiny of her entire life in order to hold a man accountable for allegedly raping her. I think we can all agree it's obvious who's got the greater motive to lie -- that golddigging bitch! Case closed.

Say it with me, folks: That's rape culture.