Admit it -- you used to wear Crocs

They were everywhere, but now the ugliest shoes of all time may be headed to a landfill near you. What happened? 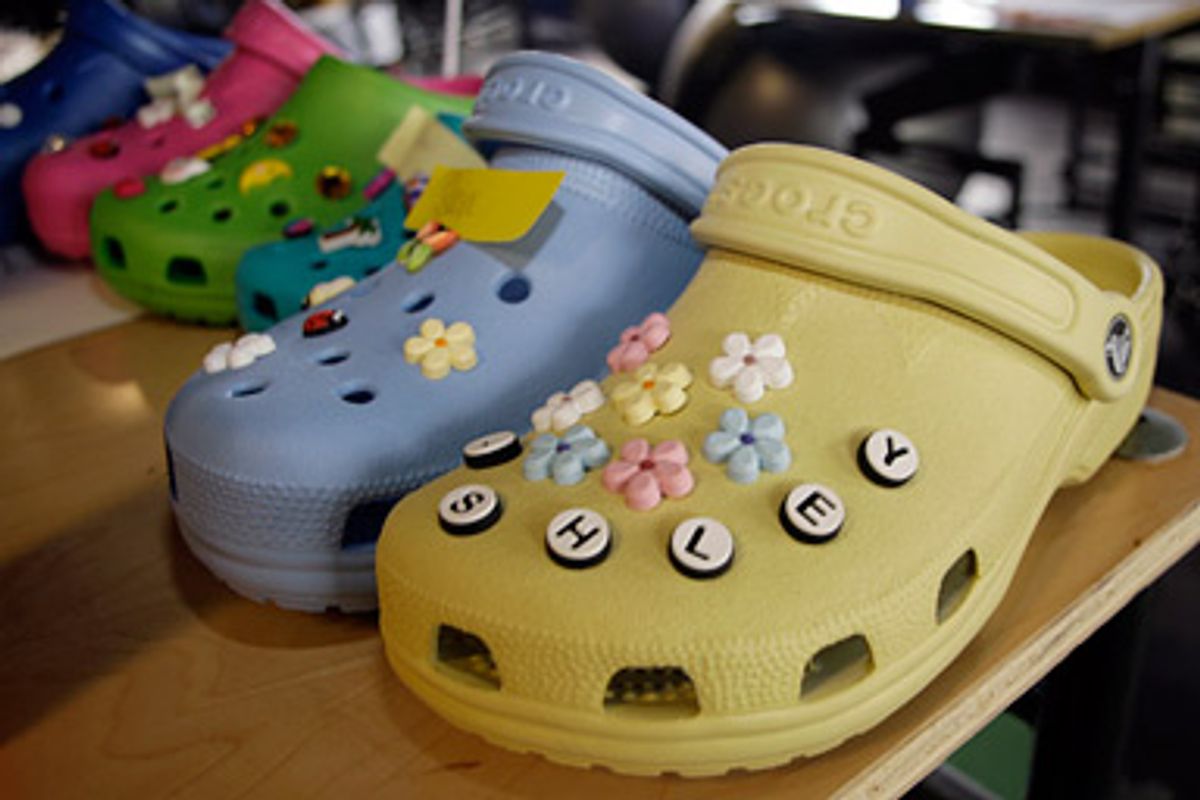 In this Oct. 3, 2006 file photo, Crocs shoes are seen in Boulder, Colo. In a report released on Wednesday, March 18, 2009, the auditor of Crocs Inc. says it has "substantial doubt" about the Colorado-based shoe company's ability to stay in business amid falling revenue.
-- In retrospect, the rise of Crocs seems improbable -- impossible almost -- even to the people who rode the wave all the way to the top.

"For a while, they were just right there, in the middle of American culture," says Richard Polk, the owner of Pedestrian Shops and ComfortableShoes.com, based in Boulder, Colo. Polk's store was the first real shoe store to stock the crazy-looking plastic shoes, a few years back, when they first roared out of nearby Aurora to take the world by storm. Polk was a believer; not only did his shop get on the bandwagon early, but he also wore a pair all through a campaign for Boulder City Council in 2005. Yet looking back, even he can't quite believe it. "It was amazing -- here you got grown-ups talking about serious stuff, wearing royal blue shoes," Polk says. "I don't think that'll ever happen again."

Which is sort of the problem for Crocs Inc. now. Reports about the company's future look bleak -- it lost $185.1 million last year, shed 2,000 jobs, and revenue in the first quarter of 2009 declined by 32 percent. And yes, you read that right -- they had grown so big so quickly that they laid off 2,000 people. Just three years ago, Crocs went public in a splashy stock offering, raising $200 million; now it trades at about three bucks a share, down from a high of nearly $70 in October 2007. Analysts wonder whether a scheduled September debt payment will do the firm in.

Crocs appears to have been a classic victim of its own success. Founded by some friends who somehow got their hands on a new Canadian technology to make lightweight, bacteria-resistant foam, the company launched in 2002, aimed at boaters, who might need waterproof footwear. Things started slowly enough. They sold to people who liked them more for their comfort and support -- cooks, nurses, waiters, anyone who needed to be on their feet for a long time.

But three years ago, they somehow just caught fire, spreading from the heartland to the coasts in a reversal of the usual trend path. New York chef/erstwhile Food Network star Mario Batali endorsed them without reservations, buying dozens of pairs; he would go on to be such an effective evangelist that the company launched a special Batali line. Polk's store started selling as many as 5,000 a month, between the bricks-and-mortar locations and the Web site. By the summer of 2006, Crocs were everywhere. "You've tried to ignore them, but they've spread like vermin," the Washington Post's Style section sneered in an Aug. 1, 2006, piece on the trend. Crocs didn't just roll with the boom, it pushed it along -- the company took out ads in Vanity Fair, with the tag line "Ugly can be beautiful."

That ad campaign gets to the heart of why the rise, let alone the fall, of Crocs was such a mystery. The shoes are ugly. You know they're ugly. People knew they were ugly even as they flocked to buy them; they celebrated, they reveled in their ugliness. They created a whole tacky subculture around them, sticking little plastic charms -- known as "Jibbitz" -- in the holes that dot the tops of the shoes. You could decorate your shoes with hamburgers or sharks, and for some strange reason, people actually did. The shoes sold by the millions. By 2007, even George W. Bush was tromping around in the things.

And Crocs, like any good business, expanded its operations to meet demand. It bought the company that made the Jibbitz, in a vertical integration move straight out of Andrew Carnegie's playbook. It ramped up production, building factories in Canada and Mexico to churn out more and more of the shoes. It set up distribution centers in Japan and Holland to help shovel the things out to a global audience. It tried to launch a line of clothes, made out of the same synthetic material it used to make the shoes.

But the material, it turned out, was part of the problem. With the exception of a few well-publicized incidents where the shoes got caught in escalators, Crocs, it seemed, were virtually indestructible. Which meant no one ever had to buy replacement pairs. Perhaps no one at Crocs HQ had heard the term "planned obsolescence,"  or seen the movie "The Man in the White Suit." At some point, the company saturated its market and suddenly ... everyone who ever had any intention of owning a pair of Crocs, did. And sales came crashing down. The recession, when it began last year, was the final blow.

Now, in the summer of 2009, just three years after Crocs rocketed up, it's hard to find a pair on anyone over the age of 10. Wandering around the Mall, the White House and the Capitol over the last week, I saw plenty of tourists strolling in flip-flops, sneakers, business shoes -- and only a handful of Crocs. A few years ago, it would have been impossible to walk a block through downtown without spotting them in some garish color.

"So many things happened to have their growth be on such an unrealistic path that when the economy pulled back, they had just figured out how to make more -- and they needed less," Polk said. "You couldn't sustain that fairy dust thing. There's just no reason why such a large percentage of the families in America needed to have half a dozen pairs under their kids' beds." (Incidentally, while Polk is still selling shoes, he's no longer on Boulder's City Council. He served one term, thanks to his Croc-walking campaign, but didn't seek reelection after he was arrested for marijuana possession in 2006.)

Now in its death throes, Crocs has turned to more and more exotic styles. There's the Santa Cruz, vaguely modeled on classic espadrilles  -- a pair of which, in full disclosure, I must cop to owning. There are boots, known as the Nadia. There are models with high heels, and golf shoes. There is even a whole run of Crocs lined with fur, known as the Mammoth, which Salon's Rebecca Traister sheepishly admitted to purchasing for her boyfriend.

But if Crocs is to survive its debt burden, it may have to retrench, getting back to basics and its core market -- the chefs, the nurses and the others who bought the shoes in the early days, as well as kids, who retailers say like the shoes because they don't need help tying them. The new CEO, John Duerden, has indicated as much, saying the company knows there's still a market out there for its products and is taking steps to slim down to make sure Crocs can serve it. When pressed, though, he's also defended the recent diversification. "We currently have more than 120 styles of casual, comfortable footwear, including sandals, boots, heels, wedges, flats and functional footwear for people who work on their feet or who have foot or back problems, along with our signature clogs," Duerden wrote in a snippy post on the company's blog after the Washington Post reported on its financial problems.

Regardless, the Crocs Inc. we all knew and loved -- or hated -- a few years ago seems to be a thing of the past. Either the classic Crocs shoes will be sold, quietly, to niche markets, or the company will turn itself into just another anonymous manufacturer of cheap, more or less well-made footwear that looks indistinguishable from anything else on anyone's feet. And all those brightly colored, indestructible marvels will, one day, clog up our landfills. And future archaeologists will find them and say, "Wow. These are some ugly shoes."