Will Tolkien's heirs kill off "The Hobbit"? 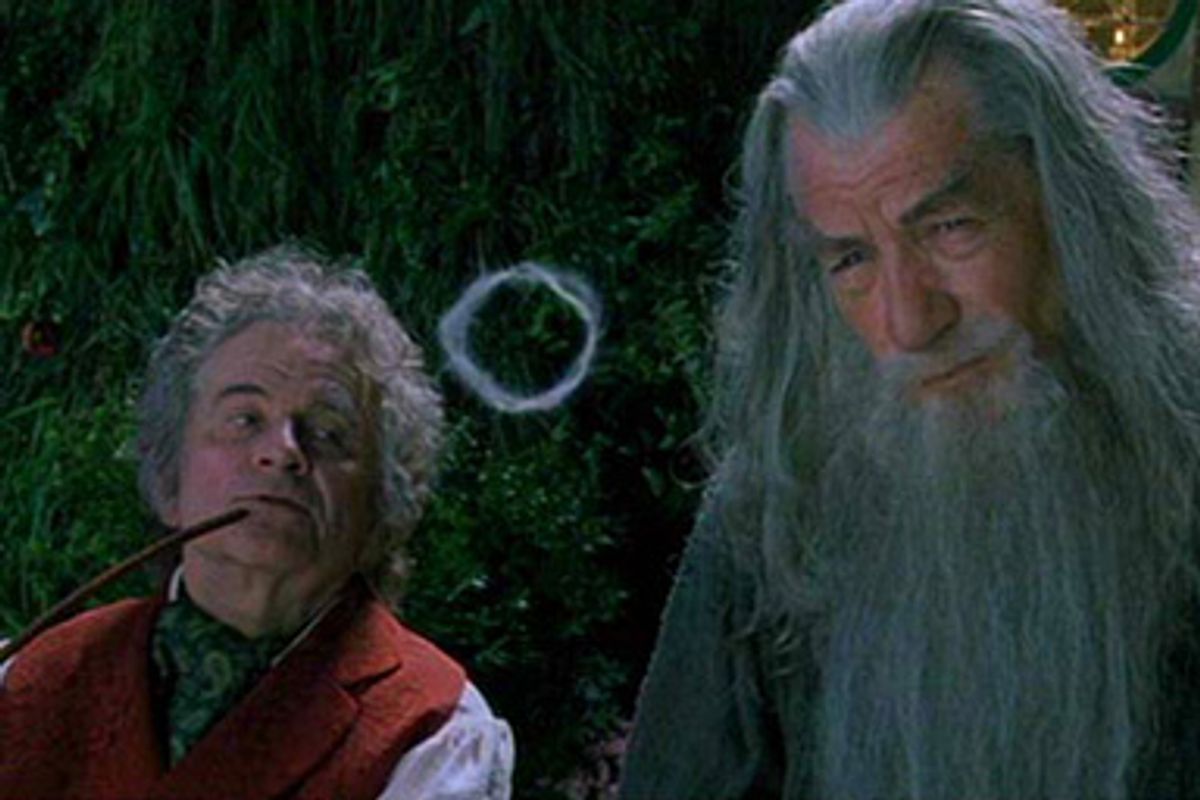 Ian Holm and Ian McKellen in "Lord of the Rings."

Gandalf, the benevolent and mysterious wizard in J.R.R. Tolkien's "The Lord of the Rings" -- so memorably played by Ian McKellen in Peter Jackson's film trilogy -- has powerful magic at his command. But can he make $6 billion disappear? That number is the reported worldwide take for Jackson's LOTR trilogy, from box-office receipts, home-video sales and associated merchandising. Yet according to a lawsuit filed recently in Los Angeles by Tolkien's children and other interested parties, New Line Cinema and its parent company Time Warner (which produced and distributed the films) haven't paid them so much as one Orc-slobbered piece of silver.

At first glance, this case looks like just another courtroom test of the mind-clouding properties of Hollywood accounting, along the lines of Art Buchwald's "Coming to America" suit -- in which Paramount Pictures claimed that a $350 million hit had produced "no net profit" -- or James Garner's long-running disputes with Universal over syndication of "The Rockford Files." Indeed, it may well wind up that way: Tolkien's heirs assert they are owed $220 million, New Line claims it owes nothing, and tortuous settlement talks will be required before both sides decide to split the difference and walk away. That's more or less how previous LOTR lawsuits have been settled; New Line has already shelled out well over $100 million between a royalty dispute with Jackson and a separate complaint by one-time rights-holder Saul Zaentz, who produced an animated "Lord of the Rings" film in 1978.

But at the moment no settlement appears likely -- even a major media conglomerate will struggle to avoid yet another $100-million-plus payout amid a crushing recession -- and the closer you look at the Tolkien lawsuit, the more complicated the whole thing appears. Tolkien's heirs are likely motivated by a sense of injustice and a desire to reclaim their father's patrimony, as much as by the prospect of a huge payday, but other, more shadowy factors are at work as well. Hypothetically, this case could shut down New Line's forthcoming production of "The Hobbit," or turn it over to the Tolkiens, for resale to the highest bidder. One possible way of decoding this suit, in fact, is as a sub-rosa struggle between two enormous, Sauron-like media companies over the future of perhaps the most lucrative entertainment franchise in history.

I'm not a lawyer nor do I play one on TV, and I'll leave it to law-school third-years around the country to puzzle over the reported details of the 1969 contract under which Tolkien originally sold the film rights to his books. (In poor health and facing a big tax bill, Tolkien came away with $250,000, which comes under the heading of It Sounded Like a Good Idea at the Time.) According to Bonnie Eskenazi, the Tolkien family's attorney, New Line is allowed to deduct 2.6 times its production costs plus a certain amount of advertising expenses before it begins to pay the family its 7.5 percent royalty.

You'll be shocked to learn that the company is evidently taking the position that its production and promotional expenses were so enormous that no royalties are due to the Tolkiens out of those 6 billion smackeroos, either now or in the foreseeable future. As Pierce O'Donnell, a lawyer who represented Buchwald in his suit against Paramount, told Bloomberg reporter Brett Pulley, Hollywood accounting is "an esoteric world where black doesn't mean black, and white doesn't necessarily mean white."

Purely based on the history of these things, it seems unlikely that New Line/Time Warner can escape without paying the author's children, Christopher and Priscilla Tolkien (who are 84 and 80 years old, respectively), or their heirs a substantial pile of cash. Nor should they, in my view. But the $220 million is almost window dressing; the gun on the mantelpiece in this little drama is the Tolkien family's claim that New Line's byzantine accounting practices amount to a breach of the contract Tolkien originally signed with United Artists 40 years ago.

If such a finding were made, the remedy would be clear. All rights to Tolkien's work would presumably revert to his heirs, and New Line's planned two-part production of "The Hobbit," a pair of LOTR prequels to be produced by Jackson and directed by Guillermo del Toro, would be thrust into legal limbo. "Should this case go all the way through trial, we are confident that New Line will lose its right to release 'The Hobbit,'" Eskenazi told Pulley.

Understandably, reporters and LOTR buffs have jumped all over this angle. Xan Brooks' widely reprinted article from the Guardian begins: "Guillermo del Toro's film version of 'The Hobbit' could be killed off in a pending battle between a Hollywood giant and the family of the book's author." That's a nifty little newspaper lede, except that Eskenazi didn't say anything like that. She suggested that New Line could lose its right to release "The Hobbit," not that the Jackson-del Toro "Hobbit" won't get made.

If there's one thing I'm sure about in this exceedingly murky, high-stakes poker game, it's that no one at the table is foolish enough to want to shut down a production that promises to yield, at a conservative estimate, an additional $2 billion to $3 billion in worldwide revenue. What the Tolkiens and Time Warner are fighting over is who controls that production and who will reap the enormous benefits. In that regard, it's worth noting that the Tolkiens' principal co-plaintiff is Rupert Murdoch's News Corp., the parent company of HarperCollins, which publishes the Tolkien books. Another News Corp. subsidiary, of course, is Fox, a studio that would be well positioned to take over production and distribution of the Jackson-del Toro "Hobbit" movie if the rights reverted to the Tolkien family.

Just to be clear, I'm not implying that the Murdoch empire is using the Tolkiens to wage a proxy war against Time Warner. There is, however, an intriguing convergence between this case and the long-running rivalry between those two huge entertainment conglomerates, and one can only imagine that lawyers and bean counters on all sides are losing sleep chewing over the possible outcomes. By far the likeliest of those, of course, is a last-minute settlement that pads the lawyers' pockets and leaves everything else pretty much status quo. Failing that, Christopher Reuel Tolkien v. New Line Cinema Corp. is scheduled to go to trial in October, around the same time as del Toro's "Hobbit" production begins to roll in New Zealand.