Is GOP using race to block Obama agenda? Ya think?

Still, the media won't talk about the economic interests that profit from hate-preachers like Beck and Limbaugh 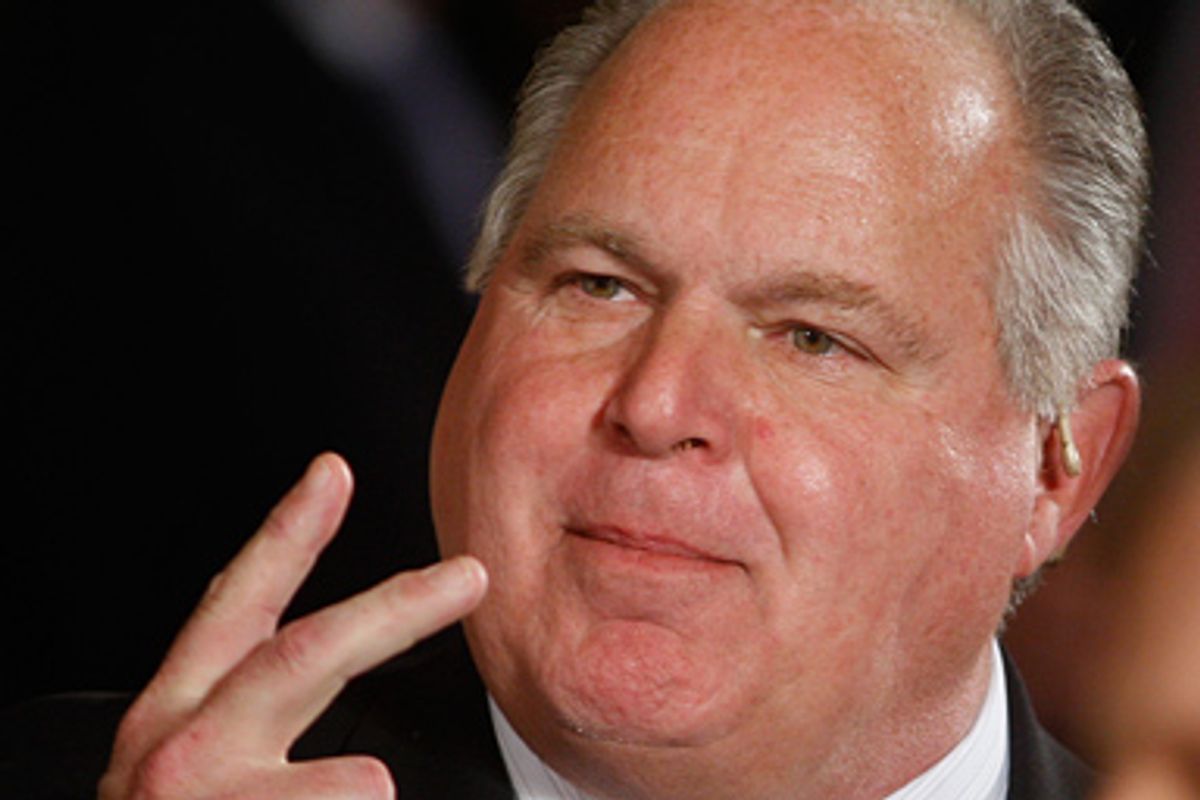 In this Jan. 13, 2009 file photo, conservative talk show host Rush Limbaugh talks with guests in the East Room of the White House in Washington.
--

(Updated below, with Rush Limbaugh's on-air comments about me on his Thursday show)

Maybe I was feeling guilty for spending so much time on wingnut issues lately -- Birthers, Sarah Palin, the Gates controversy, whether President Obama is a "racist" -- when I know I should be writing about the political stakes around healthcare reform. Whatever the reason, I was driven to go all meta on Chris Matthews' "Hardball" today, linking the racist garbage being thrown at Obama to the forces that are trying to block his social and economic agenda, particularly healthcare reform.

Matthews led into our segment, mainly focusing on Glenn Beck's nutty claim that Obama is racist, by noting that Obama's poll numbers are dropping on healthcare, and I took the opportunity to point out that there's a connection between the organized campaign to label him some kind of racist alien socialist who's ineligible to be president, and his difficulties getting his social and economic agenda passed. I did it with a history lesson, never terribly welcome on news shows (anywhere but PBS), but it couldn't be avoided.  You can watch Matthews and me argue about it here (text continues below):

There is one main reason the U.S. doesn't have the social democratic traditions and programs enjoyed by most Western democracies -- we are the only such nation without some kind of universal healthcare -- and that reason is our history of ethnic, racial and class strife. (The bounty of the eternal frontier and American exceptionalism fit in there too, but I'd pick our fractious and well-manipulated heterogeneity as the top reason.)

The history of the 19th century and early 20th century is the history of labor and political coalitions splintered by divisions between Northern Europeans and Southern Europeans, between middle-class Germans and less well off German Jews, between the Irish and everyone else, and, increasingly after blacks won something akin to freedom, between all white ethnic groups and African-Americans. Latinos and Asians came with their own demands and baggage and relations got more complicated still. Barriers of language, culture, class and skin color thwarted many efforts to grow labor unions and build a social-democratic majority.

Meanwhile, the one constant for at least 150 years has been a savvy cadre of political operatives who used those racial and ethnic divisions to advance their pro-business agenda. Go back to Karl Rove's idol Mark Hanna, who made turn-of-the-19th-century Republican politics safe for whites-only organizing in the South, to Richard Nixon's Southern Strategy, to Lee Atwater's Willie Horton strategy to Rove's own neo-Southern, pander-to-the-base strategy that has driven the GOP into its current ditch. Where in other Western nations, those years saw the fairly steady advance of basic conceptions of human rights, labor rights and an expanded social safety net, in the U.S. such social progress -- and especially such programs -- was more sporadic and limited.

Matthews didn't buy my analysis; in fact, he called it "Marxist" -- I challenged him, as it's not that simple, and he changed it to an "economic analysis" -- and he put former Rep. Kweisi Mfume on the hot seat asking if he agreed with me. Mfume started off by saying he's not a conspiracy theorist -- for the record, neither am I -- but then he added with a smile, "I don't believe Humpty Dumpty just fell; I believe he was pushed. And there are people who are pushing buttons to try to hold back the progress we are making in this country as one nation. And when you push those buttons, it causes the progress to slow down ... This is anti-American."

There is no question in my mind, and I doubt there's much in Mfume's either, that these divide-and-conquer tactics stay in use because, well, they still work. Beck and Limbaugh won't convince a majority of Americans that Obama is either racist or Kenyan, but the dirty fog of their constant smears has to tarnish Obama at least a little. The irony is the last 50 years have seen brutal class warfare in which the forces behind the wealthy transferred income and privilege consistently upward. Yet now the forces of reaction are claiming Obama is the class warrior, and the race warrior, declaring war on whites, and trying to snatch the status-quo privileges -- like healthcare, allegedly -- from the haves, to provide for unworthy have nots.

It's a noxious strategy, and we can't let it succeed. Obama likewise can't let Blue Dogs and allegedly "moderate" Republicans derail his agenda, either. Democrats lose because they fail to deliver on their promises to constituents. Bill Clinton delivered welfare reform, beloved by the right, but almost none of the social supports that were supposed to go along with it, and maybe most important, no healthcare reform that would have made middle-class lives easier. Obama can't make that mistake; he doesn't just need a bill, any old bill, to pass. He needs reforms that will expand healthcare to those who don't have it, bring costs down for those who do (and for the government), and reduce the incentives for profiteers to greenlight unnecessary coverage, and block needed care, all in the interest of big profits. A bad bill might be better than none.

But Beck and Limbaugh don't want us thinking about the intricacies of what might work -- the public plan vs. a co-op, how to reduce costs, whether Big Pharma and the insurance industry is happy with the current push because they're going to come out fatter and happier. Instead they want us debating whether Obama hates white people and whether he was born here and whether he's even legally fit to be our president.

One last word on Beck: Matthews read a statement from Fox saying the news network doesn't support Beck's views on Obama as "racist." Again I have to say: Mighty white of you, Fox! It's so cynical; they can disavow his words, but they're still cashing the checks from Pfizer, Campbell Soup and other advertisers for his hateful show. If Fox wants to separate itself from Beck's garbage, it needs to separate itself from Beck himself. Don't hold your breath waiting for that to happen.

Wow, Rush Limbaugh just called me a "bigot," and the man who made "Barack the Magic Negro" famous is now calling me "the magic white." Made my day. Here's what he said, according to the folks at Media Matters (audio to come):

LIMBAUGH: Joan Walsh, “Obama got where he is largely because he makes white people feel like he knows we’re all trying real hard. And we really like it when black people make us feel that way.” What a dense, shallow, person. It is, it’s almost buying the magic negro thing and when you get down to it, Joan Walsh is almost saying, “hey this is the guy that doesn’t scare us.” Only she’s saying it in reverse. We’re the ones that don’t scare him. It’s like Joan, no it’s not magic, it’s Joan Walsh and the white – well there’s no such thing as a white – the magic white. Joan Walsh is describing the magic white.

Now, I just want to make sure I have this straight, turns out I am the racist. And you people have been listening to this program for 20 years. I have been hosting it for 20 years. I have never said and you’ve never heard me call my grandmother a “typical white woman.” You’ve never heard me call any black person a typical black person. The truth is Ms. Walsh, President Obama is so race-obsessed he write a book about the father he never really knew, subtitled a story about race and inheritance. He marries a woman who’s lucky enough to get into Princeton but writes a book about how she is always an outsider in white culture. Then the two of them sit in Reverend Wright’s hate temple of Black Liberation Theology for 20 years and I am the one with the race problem, Ms. Walsh? The problem is people like you being in the media Ms. Walsh.

Let me waste my time by saying a couple of things to Limbaugh. First, I criticized Obama's affiliation with Rev. Wright; I'm not a Wright fan. I also criticized Obama's comparing his grandmother to Wright. It bothered me. I took a lot of garbage on this site and elsewhere for saying it bothered me, but I didn't stop saying it. And I'm not going to stop saying Rush "grab my ankles, we have a black president!" Limbaugh is racist, either. No matter how many racist and misogynist dittoheads send me hate mail.