The famed author is back with a tale of drugs, hippies and paranoia -- and you don't need a decoder ring to read it 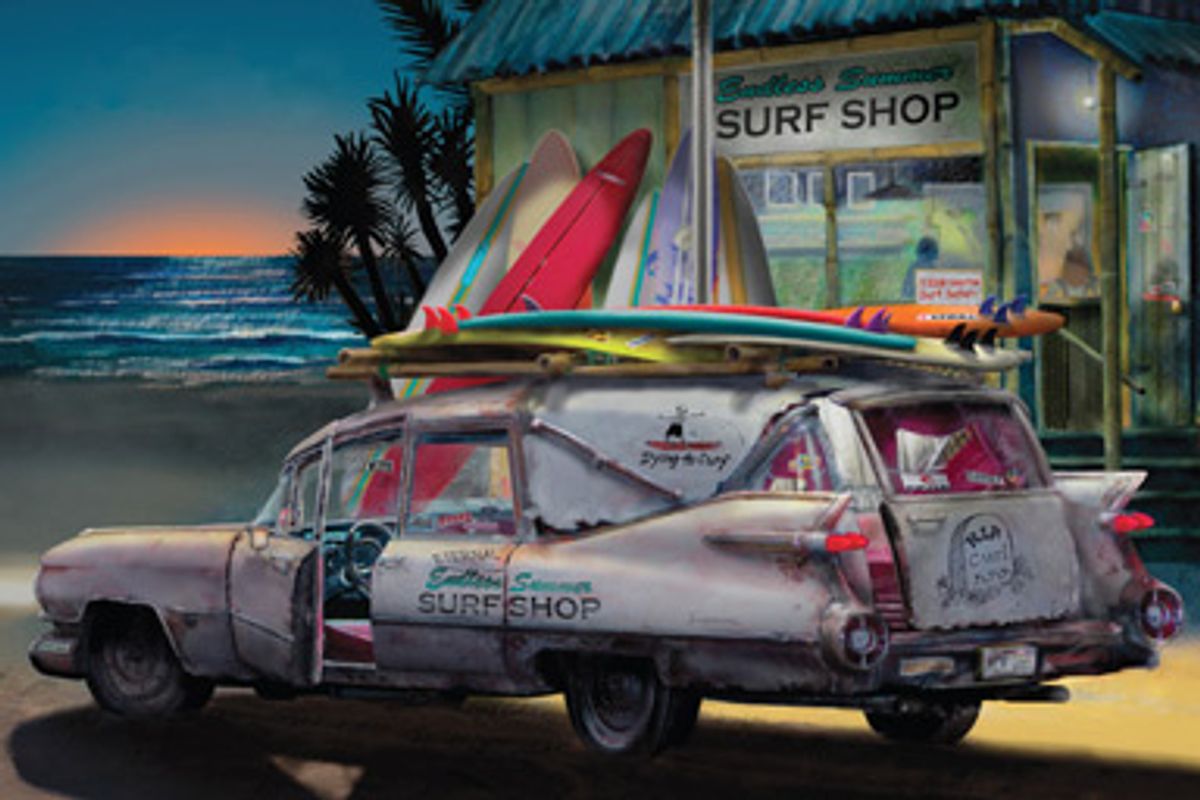 Hard-boiled detective fiction may not seem like the ideal vehicle for the often cryptic style and subject matter of Thomas Pynchon, but his newest novel proves otherwise. An account of the adventures of a hippie private eye pursuing assorted nonlucrative commissions in a Southern California beach town around 1970, "Inherent Vice" is a sun-struck, pot-addled shaggy dog story that fuses the sulky skepticism of Raymond Chandler with the good-natured scrappiness of "The Big Lebowski." It's an inspired formula; the mystery plot supplies the novel with a minimum of structure (as well as confidence that there's some point to the enterprise) and the genre provides ample cover for Pynchon's literary weaknesses.

Of course, to the fanboy contingent that makes up some hefty percentage of his readership, Pynchon has no weaknesses, but those of us who have occasionally glimpsed the emperor in his skivvies must proceed with greater caution. There's nothing quite so dispiriting as slogging your way through 1,085 pages of increasingly repetitive and tedious folderol (i.e., "Against the Day") only to find that its significance ultimately boils down to not much more than sheepish nostalgia for the heyday of the counterculture. Not that "Inherent Vice," which clocks in at a far more surmountable 372 pages, doesn't have essentially the same theme as "Against the Day," but here it's presented straightforwardly, rather than disguised as a misplaced sympathy for anarchist bombers tricked out in mathematical paraphernalia and hot air balloons. Also, unlike the utopian romances and adventure stories Pynchon pastiched in "Against the Day," the hard-boiled genre has its cynicism baked in, furnishing "Inherent Vice" with a downbeat counterpoint to what even the author himself seems to realize is a callow idealization of the hippie scene.

Our hero, Larry "Doc" Sportello, plies his unlikely trade behind a door labeled "LSD Investigations" (for "Location, Surveillance, Detection") and decorated with the image of "a giant bloodshot eyeball," painted by speed freaks, the highly detailed capillaries of which have been known to hypnotize potential clients into forgetting what they came for. The office is situated in Gordita Beach (the fictional counterpart of Manhattan Beach, where Pynchon lived during the same period), south of Los Angeles proper and home to the usual Pynchonian assortment of marginal types: stoners, musicians, surfers, small-time crooks, psychics, buxom "bikini babes," nubile "stewardii" and so on.

Doc gets a visit from an ex-girlfriend, Shasta, "laying some heavy combination of face ingredients on him that he couldn't read at all" and worried that her new boyfriend, a real estate developer, may be the target of a kidnap plot by his wife and her lover. Doc investigates, then gets knocked out cold in a massage parlor, implicated in a murder and clued into a web of connections involving the Black Panthers, the Aryan Brotherhood, loan sharks, L.A.'s genteel oligarchy, the LAPD, a dodgy sanitarium, a consortium of dentists, a surf band supposedly staffed by zombies and something called "the Golden Fang" -- which could be a schooner, a drug cartel, an archvillain, or maybe just those dentists, or then again, maybe it's all four. Most of the other jobs Doc takes on during the course of the novel -- hard-luck cases to a one -- turn out to be connected to the Golden Fang or the developer, who has gone missing, apparently taking Shasta with him.

Perhaps the most refreshing aspect of "Inherent Vice" is that, while a few key elements of this baroque construction go unaccounted for, a surprising number of plot strands are more or less neatly tied up by the novel's end. The story isn't easy to follow, but it can be followed -- and without the aid of the sort of secret-decoder-ring-style analysis that often passes for literary discernment among Pynchon devotees. Besides, the reader always retains the option of writing off any stray fancies to pot-induced fantasizing; one of the novel's most amiable qualities is its mellow willingness to blur the line between the author's pet conspiracy theories and the random mental bebop of the merely stoned.

Paranoia is also a purview of noir, a genre that shares Pynchon's propensity for regarding arrested development as a form of valiant, but doomed nobility. Everyone in hard-boiled fiction has already fallen from grace before the story even begins, and in its blasted landscape only one or two true men remain, lone knights, clinging to the fading rags of their personal conception of chivalry. In the case of "Inherent Vice," the holdout is both Doc and the community of Gordita Beach, which is being dragged by Greater Los Angeles down the long slide from the crest of a perfect wave.

Pynchon conceives of the almost-lost paradise of hippieland, embodied by Gordita Beach, as an enormous postgraduate crash pad, where everyone lounges around all day getting wasted and having sex until evil is introduced in the form of a landlord demanding the rent. Such bummers are caused by nothing more than sheer "greed," the term Pynchon's protagonists use for capitalism, that heartless machine bent on grinding the humanity out of us all. The machine is run by shadowy puppet masters who say things like, "Look around. Real estate, water rights, oil, cheap labor -- all of that's ours, it's always been ours. And you, at the end of the day what are you? One more unit in this swarm of transients ... We will never run out of you people. The supply is inexhaustible."

The title of the novel refers to a legal term used by insurance underwriters describing a defect integral to a property that will cause it to deteriorate over time. So it is with the shriveling Eden of Gordita Beach, where the potheads are all turning to heroin, the formerly cool have sold their services as narcs and government agents, and whatever slack the straight world (or "flatlanders," as Doc calls them) once cut the hippies has been rescinded in the wake of the Tate-LaBianca killings. The specter of Charles Manson hovers over the novel, partly because the public really did come to view hippies with greater apprehension after the notorious murders, but mostly because the Manson Family represents the perversion of hippiedom's communal vision. They were evidence of the inherent vice in humanity itself, the seeds of violence, idolatry and the abuse of power that no utopian plan can hope to eradicate.

The novel's other iconic touchstone is John Garfield, Doc's favorite actor, a movie star who specialized in unpolished working-class heroes, rebelled against the studio system and died young after being blacklisted for his leftist politics. If Manson stands for the corruption of the counterculture, Garfield (who rejected communist authoritarianism as well as conservatism) represents the futility of confronting the world's vast systems of command and control. Doc's policy of remaining detached, helping the odd friend here and there and slipping around the corner whenever the shit hits the fan proves the better part of valor.

These are the "arguments" of the novel, in the archaic sense that they summarize the author's message and beliefs and in the contemporary sense that they are social themes for critics and other readers to ferret out, thus demonstrating their analytic chops and allowing everyone involved to feel very smart. But a novel is an aesthetic artifact as well as an intellectual one, and of late Pynchon's fiction has mostly failed as art.

"Inherent Vice" almost succumbs to the flaws that scuttled "Against the Day;" in the middle, it certainly founders. The narrative, as is all too typical of Pynchon's recent fiction, lumbers through a monotonous parade of indistinguishable characters, each with a silly name and one or perhaps two outlandish traits, as if selfhood were something to be ladled out in stingy portions like the gruel in "Oliver Twist." Opportunities to portray interactions of import go to waste; in particular, Pynchon depicts women and sexuality with all the depth and nuance of a 14-year-old who has acquired his entire knowledge of these subjects from the dirty jokes printed on vintage novelty cocktail napkins.

Some have contended that the cartoonishness of Pynchon's characters is deliberate, a postmodern spit in the eye of the bourgeoisie ideal of "rounded" fictional psychology. Perhaps, but this argument isn't very convincing, given that Pynchon otherwise evinces conventionally sentimental views of humanity (for example, describing a chain of freeway drivers in a thick fog as "a temporary commune to help each other home"). Let's face it, there's something profoundly futile about mounting a protest against vast, complex systems that use ordinary people like interchangeable cogs by writing novels that are vast complex systems in which the characters amount to interchangeable cogs.

What ultimately delivers "Inherent Vice" from this futility are the stubbornly individualistic imperatives of its borrowed genre. The detective story must resolve around a central character -- in this case, Doc -- and Pynchon has no choice but to make something of him. Because his creator is fundamentally sweet (unlike, say, Philip Marlowe's), Doc turns out all right, and in negotiating his fatally compromised moral environment, even attains a paradoxical sort of wisdom. "What, I should only trust good people?" he says to a friend who questions the deal he cuts at the novel's end, a rash yet generous act of faith. "Man, good people get bought and sold every day. Might as well trust somebody evil once in a while, it makes no more or less sense. I mean, I wouldn't give odds either way." When driving in the fog, you sometimes have to take whichever exit presents itself, and hope against hope for the best.