It's the priest-vampire-ghost love story of summer! 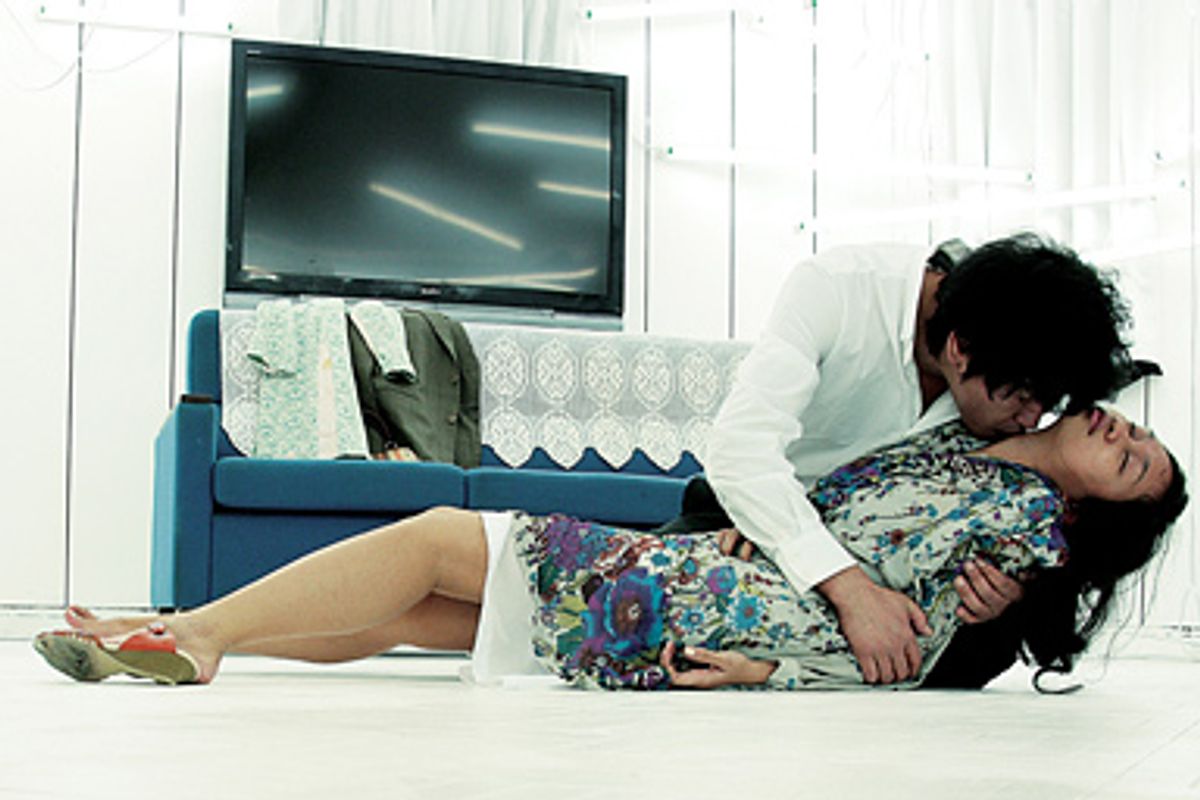 Hey, I know -- you can't wait for that new vampire love story, right? The one with the handsome, tormented stranger who sees the inner beauty of that mousy Cinderella chick. He loves her intensely, so much so that even though he must drink human blood to live, he constantly fights against the impulse to pull her into his undead world of darkness and suffering. Well, here it is.

OK, this one is in Korean, which maybe you weren't expecting. And its vampire hero is a Roman Catholic priest, which admittedly might not go down big with the family-values crowd. It comes with a heavy dose of religious guilt, some bizarre sexual slapstick involving a leering, drowned ghost, unpredictable explosions of violence and a black-comic satire of middle-class family life. It's called "Thirst," and it's partly based on Emile Zola's 19th-century novel "Thérèse Raquin," of all things. Its cinematic daring, narrative wildness and, yes, full-throated romance make it the best vampire love story of the year. (If you're over the age of 14, that is.)

Winner of the Jury Prize at Cannes earlier this year, "Thirst" is the newest (and in some sense oldest) film from Korean director Park Chan-wook, who almost single-handedly seems to embody this decade's prodigious East Asian cinematic renaissance. Best known for the "Vengeance" trilogy, a series of interconnected, ultraviolent, moral fables that included the international cult hit "Oldboy" -- which a few media hysterics briefly, and irresponsibly, linked to the 2007 Virginia Tech massacre -- Park has already become a singular figure in film history. It's difficult to think of another director who's been so widely embraced by the global art-cinema scene and by horror-thriller genre buffs. Hitchcock? Kurosawa? Roman Polanski? Quentin Tarantino? Maybe if you Cuisinart those guys together and ferment the mixture in the cultural hothouse of contemporary South Korea, you get Park Chan-wook.

Even in jest, such a formula seems like diminishing an artist, and Park is very much his own creation. Both in person and in his films, Park comes off as completely committed and sincere. He hasn't made a movie about a selfless priest who dies of a horrible skin disorder after a failed medical experiment, only to be reanimated as a vampire who seems to have supernatural healing powers, and who then embarks on a doomed love affair with a bitter and lonely middle-class wife -- all while trying to square his bloody and sinful existence with his abiding faith in God -- out of some jaded, meta-B-movie impulse. If "Thirst" can be described as a wild, nearly crackpot assemblage of different kinds of stories, they're all addressing a set of basic human questions about love, sex, violence, guilt and redemption that have preoccupied Park throughout his career.

I think "Thirst" is a brilliant and gruesome work of cinematic invention as well as a passionate and painful human love story. Park is so often celebrated as a stylist -- some of the credit should go to his cinematographer, Chung Chung-hoon -- that people don't notice how wonderfully he works with actors. The central couple in "Thirst," leading Korean star Song Kang-ho (who plays the priest) and one-time beauty queen Kim Ok-vin, are marvelously matched as they veer from living to undead, from love to hate and back again. I'd qualify that glowing endorsement by saying that Park's risk-taking doesn't always pay off. "Thirst" goes on too long, drags in places, and can't always manage its unstable balance of horror, romance and comedy. When the result is a daring crazy-quilt of a movie that's not quite like anything you've ever seen before, I'll take it.

I met Park Chan-wook at his midtown Manhattan hotel during his recent American visit. Sober and soft-spoken, dressed in a turtleneck and suit jacket, the 45-year-old director could pass for your average visiting Asian businessman. Although he appeared to understand my questions in English, he responded through an interpreter. This might sound implausible if you haven't seen his films, but Park is a major classical music buff. He told me his principal regret about his brief New York stopover was that he had no time to catch a concert at Carnegie Hall. "I walked by there yesterday, and there were so many posters on the walls for artists I admire," he said. (Indeed, a Bach cantata forms the basis for the score in "Thirst.")

Mr. Park, your reputation in the United States is mostly as a director of violent thrillers or horror films. Is that how you think of yourself?

Well, it would be hard for me to say that I'm a horror film director. But it would be equally hard to say that there's no violence in my films. Of course I would like to emphasize that there are many other elements in my films, and I would also like you to think about how I use violence in my films. It's not about a release. If you watch these films just for the sake of violent release, it isn't there. There is no big, beautiful, violent gunplay. I don't try to make violence look beautiful. Just because there are scenes of violence in my films, you can't lump my films together with every other film with violent scenes. In a sense that is a violence of categorization.

Now, "Thirst" is being called a vampire film, which I guess it is. But isn't that an inadequate way of describing a movie that covers so much narrative territory and so many different styles and moods?

That's true, but also, when you think about all the genre names, they never manage to represent everything that's in a film. It would be grossly inadequate to call "Brokeback Mountain" a western. Even if you add another word and say it's a gay western, it still wouldn't adequately describe the film.

I understand you've been planning "Thirst" for many years, since before the "Vengeance" films and even before you made "Joint Security Area" [the film that first brought Park international attention in 2000].

Yes, I started thinking about this film 10 years ago, but not every story element was there. And it's not as if I was thinking about it constantly for 10 years. The first things that came to me one night were the first sequence, how the priest becomes a vampire, and the climactic sequence, in which the woman who is his lover becomes a vampire. The rest of the story was blank to me.

Then one day I came across a book called "Thérèse Raquin," and the details of that story started to fill in the gaps left in my vampire story. That's when I started to write the script properly. It hasn't actually been that long since then.

Yes, that's actually one of the most important elements. It's as important as the religious aspect, or the vampire aspect. So much so that I contemplated calling it a "vampire romance" when we were trying to categorize the film. If we had called it that, it might be too reminiscent of something like "Twilight." [Laughter.]

Then I wondered whether I should call it a"vampire romantic comedy." No, I couldn't really do that.

You mentioned the religious element of the story. Why was that important to you? Is this the story of a priest who loses his faith?

Well, you could view it that way, that the main character loses faith, but in another light he really doesn't. This character very much tries to make an effort to bridge his faith and his identity as a vampire, to try to bridge these two opposing ideas. It's important to see that he makes that effort. It's almost impossible to mix these two concepts in the human brain, in any logical way. In order for him to preserve his faith and at the same time suck the blood of other people -- or to commit suicide -- all of it goes against his beliefs. At the same time, he tries to reconcile these aspects of himself. This desperate attempt, this struggle to make sense of these two opposing ideas, is the backbone of this film. It provides the energy for it to move forward, and the comedy is born out of such efforts.

Your two leading actors, Song Kang-ho and Kim Ok-vin, have wonderful chemistry together. Sexual chemistry but also a very complicated emotional chemistry, which is more important. I understand they collaborated with you a great deal in creating the film.

Yes, but I don't want to talk about only those two actors. I'd also like to talk about Shin Ha-kyun, who plays the husband of Kim Ok-vin's character. I've worked with both Shin Ha-kyun and Song Kang-ho since "Sympathy for Mr. Vengeance" [the first film in the "Vengeance" trilogy, although released second in the U.S.] and the three of us are best friends. Kim Ok-vin is a relative newcomer to the mix, but the four of us spent a lot of time together, reading the script. We made excursions to rural areas and camped out. We met up often to go drinking. We did that countless times! [Laughter.] Throughout this process we developed a bond, like brothers and sisters, like family members. In those sessions we had lots of discussions, lots of debate about the characters. That was the foundation on which those characters were built.