I'm proud to be "The Magic Honky!"

Limbaugh satirized my views on race knowing little about them. But he did reveal a lot about his own 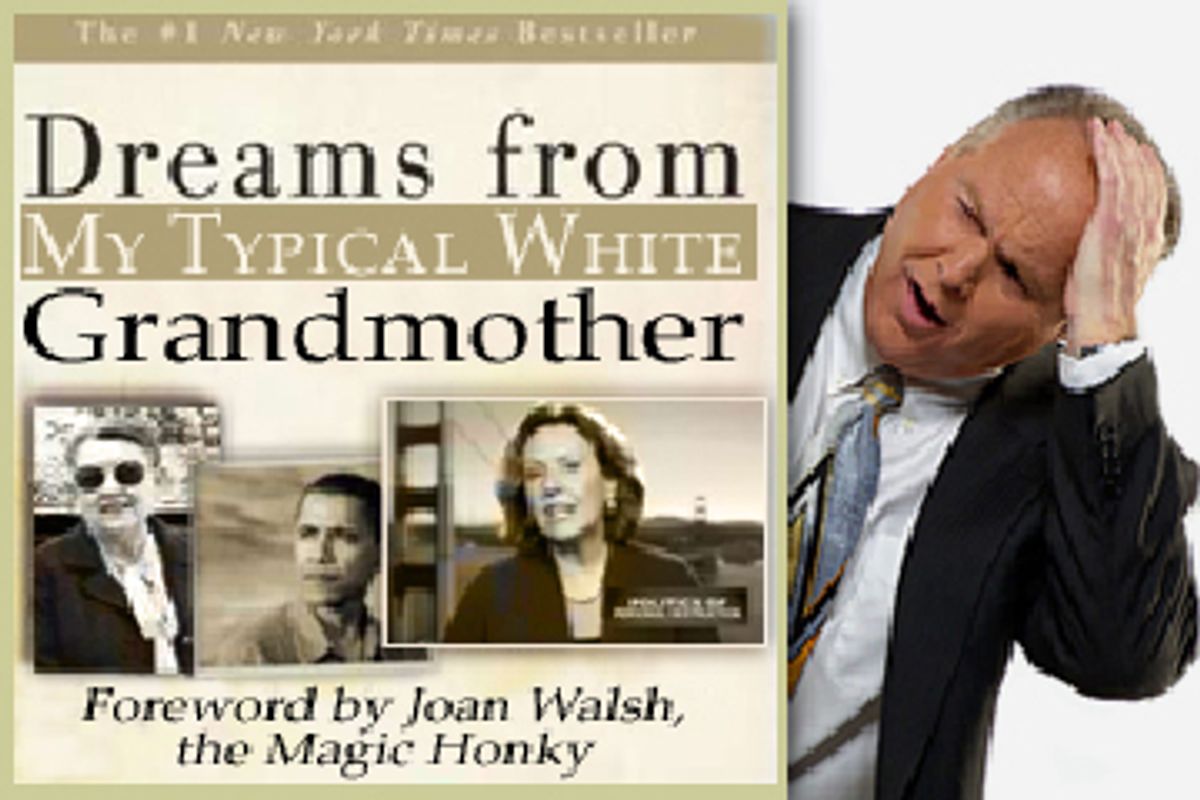 I've got to admit I'm writing this blog post at least partly because I wanted to use the art above: Rush Limbaugh's satire of Obama's first book, with me on the cover: "Foreword by Joan Walsh, The Magic Honky."

I've always given Limbaugh credit as an entertainer, and that composite is hilarious. Plus, I've got to admit, I'm flattered to be the Magic Honky. I also know that, clearly, I am not worthy: If President Obama is the Magic Negro to Limbaugh, the Magic Honky has to be a white person who's roughly his peer, someone like, say, Hillary or Bill Clinton, or Bruce Springsteen or Bono. Or Angelina Jolie. Or if we're thinking Dark Magic, maybe Dick Cheney? (It's not Liz.)

But all weekend long, I've found myself shaking my head over Rush's Thursday tantrum about me, in which he called me a "racist," a "magic white" and finally "the magic honky," trying to understand what it all means. I got very hung up on the irony of Rush pretending -- lying, really -- that I'm someone who didn't notice or care when Obama compared his white grandmother to the grandiose and racially blinkered Rev. Wright. The reality, of course, is that I was one of the few liberal Democrats who went out on a limb and criticized Obama for that unfounded rhetorical flourish, insisting that she hardly "deserved" to be compared to Wright, and calling it "the most tin-eared thing I've ever heard Obama say."

I got my ass handed to me in my own letters thread -- 773 comments, most of them negative, many calling me racially, well, blinkered -- and worse. I don't want to inflame my critics again -- especially since I've made an affectionate peace with many of them -- but it's worth quoting  a bit from that piece (because I'm never going to get to do that on cable TV, even among my friends), to prove Rush is feverishly delusional:

Describing Wright as "family," Obama compared his incendiary views to the occasional racial insensitivity of his elderly white grandmother: "As imperfect as he may be, he has been like family to me ... I can no more disown him than I can my white grandmother -- a woman who helped raise me, a woman who sacrificed again and again for me, a woman who loves me as much as she loves anything in this world, but a woman who once confessed her fear of black men who passed by her on the street, and who on more than one occasion has uttered racial or ethnic stereotypes that made me cringe." It was an intriguing leap, but I didn't buy it. I don't think Obama's elderly grandmother, who still lives in Hawaii and is reportedly too frail to travel, who was a product of her time and place and yet did her best to raise her half-black grandson, deserved to be compared to Wright, a public figure who's built his career around a particularly divisive analysis of American racial politics. It is easily the most tin-eared thing I've ever heard Obama say.

(If that's not enough, you can read my other criticisms of Wright here and here.)

I'm not replaying that old debate to try to argue that I don't deserve Limbaugh's attacks. Of course I do; I support Obama on most issues; I'm the enemy. But being parodied on an issue upon which I've actually, right or wrong, bucked my political peers brings home what should already have been obvious: Facts are absolutely irrelevant in the current political climate of hate, paranoia and demonization. I probably sound like a priss, shocked that Limbaugh doesn't know my work well enough to skewer me more accurately. As if I deserve better than President Obama, who's having to cope with morons denying he's eligible to be president and fabricating his Kenyan birth certificate.

Rush is right about one thing: Racial and economic justice (they're inextricable) represent the most important cause of my life. I've worked hard on it, inside and outside of journalism. Along the way I've had to tread my own path when I've encountered non-white justice warriors giving up on coalition, endorsing the paranoid anti-white rhetoric of a Rev. Wright, forgetting the class component to exclusion. But I always find my path back to common ground. It's delusional of me to expect a blunt object like Limbaugh to appreciate the complexities of my beliefs or experiences on this topic. But Limbaugh also helps me appreciate the simplicity of the movement for racial justice, the desire for dignity, presumption of humanity and extension of equal rights.

Of course Limbaugh, Glenn Beck, the Birthers and other whackjobs deny Obama's dignity, humanity, citizenship and love of his country. Why would I expect any different for myself? It's mighty white of me to expect to be seen for who I am, rather than the racial and political caricature that the Limbaughs and Bill O'Reillys of the world need me to be. This honky might belatedly be approaching real understanding of some of what it feels like to be black -- and it's magic!

Finally, a confession: I'm going to get a nice print of Rusty's artwork and frame it in my office. I'm proud to be on a book cover with Madelyn Dunham, President Obama and the Golden Gate Bridge in the background, even if it's satiric. It's a high point in my life. If President Obama ever needs a book foreword written by a Magic Honky, he'll know whom to call. And if Limbaugh ever wants to examine why he's so screwed up about race -- literally screwed up, imagining having to "bend over, grab the ankles, bend over forward, backward, whichever, because … this is the first black president" -- I'm happy to help him too. I mean, get him help. Because he needs a lot of help; I couldn't handle that alone.