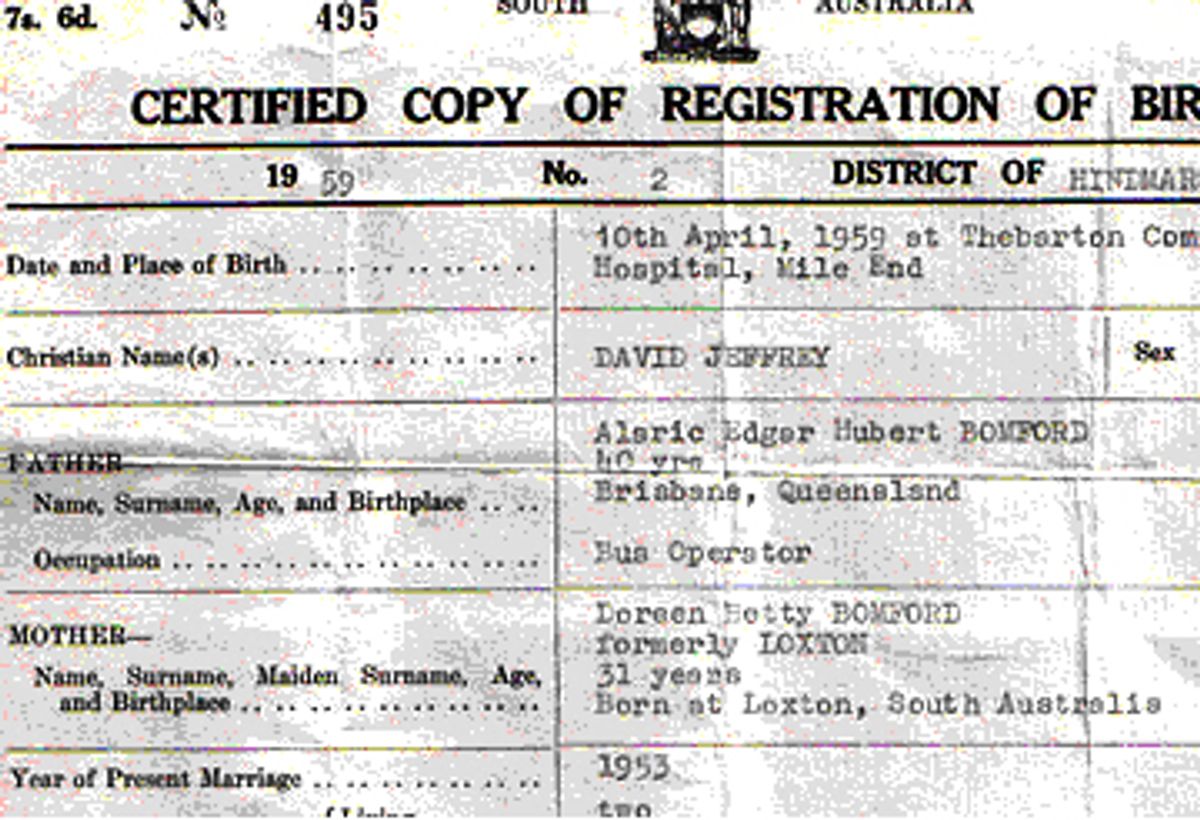 Over the weekend, Birther-in-Chief Orly Taitz released what could have been a shocking discovery: A document that was purportedly a certified copy of President Obama's Kenyan birth certificate, showing that he'd been born in Mombasa, Kenya, not in Hawaii.

It took just 48 hours to definitively expose Taitz's find as a forgery, and for the document that it was apparently based off of to surface. It's a certified copy of a birth certificate for one David Jeffrey Bomford, born in South Australia in April 1959.

Images of both certificates can be viewed below -- for comparison purposes, you can see a larger, more legible version of the forgery here. The similarities are striking; they bear the same seal, have the same document numbers at the top left and top right corners and have identical book and page numbers. The names of the registrar and district registrar listed on each document are remarkably similar as well -- the source has the registrar listed as "G.F. Lavender," while the forgery names him as "E.F. Lavender." In the original, the district registrar is "J.H. Miller;" in the forgery, it's "M.H. Miller," and the M is slightly askew, overlapping the period.

The source material was indisputably published prior to the revelation of the forgery; it was available on a family genealogy Web site and popped up in Google image searches. (The Web site is no longer accessible, apparently due to the sudden increase in traffic prompted by the exposure.)

Indeed, that's how it was discovered, by a California man named Steve Eddy, who posted his find to the forum at Politijab.com.

"I was just Google image searching and ... happened to come across a thumbnail. I spotted one, said, 'Oh! That looks similar,' pulled it up, and there it was," Eddy told Salon.

He'd been involved in debunking the Birthers before, on his own blog, but had eventually become tired of it, thinking there was nothing new to the story. The appearance of the forgery rekindled his interest, and inspired him to go looking for the basis of it.

"Normally I don't hang around political places much," he says. "Years and years ago I started a political channel on IRC, but that kind of burned out and I've been hanging out on the audio boards" -- he runs a high-end home audio business -- "and most recently they had a section there for people to talk about non-audio things, and there was this one nut there that kept posting, 'Oh, yeah, Obama's birth certificate's fake.' .... That got me hooked on that whole thing for about a year."

Now, even some of the most dedicated Birther supporters, like World Net Daily editor Joseph Farah, are pulling back and proclaiming their skepticism about the forgery. Farah, whose site published the forged certificate and gave it the boost into the Web at large, wrote in a column Tuesday, "if I had to bet on its authenticity, I would wager it is not." The column was, however, also full of distortions about the truth regarding the certification of live birth from Hawaii that Obama released during the campaign, and didn't acknowledge Eddy's find, which Farah might not have been aware of by the time his article was published.

The question of who produced the forgery, and why, is still open. It could be, as some debunkers have suggested, that someone was pulling a hoax on Taitz in order to further discredit the Birthers. It could also have been a true believer, or, of course, someone who just wanted money for it -- there have been attempts to sell a purported Kenyan birth certificate for Obama on eBay before this. The apparent source document for the forgery. Update: Just after publishing this post, I was alerted to a story in the Australian media, which has tracked down David Jeffrey Bomford, the man whose birth certificate was used in the forgery. He seems amused by the whole thing.

"That is ridiculous. Little old person in Adelaide, the President of the United States. I don't know whether to laugh about it or not, be worried about it," Bomford said. "It is interesting, someone from here being involved in a conspiracy -- that is so funny .... It's definitely a copy of my certificate. It's so laughable it's ridiculous."