The author of young-adult memoir "Everything Sucks" talks about drugs, anorexia and why "Gossip Girl" gets it wrong 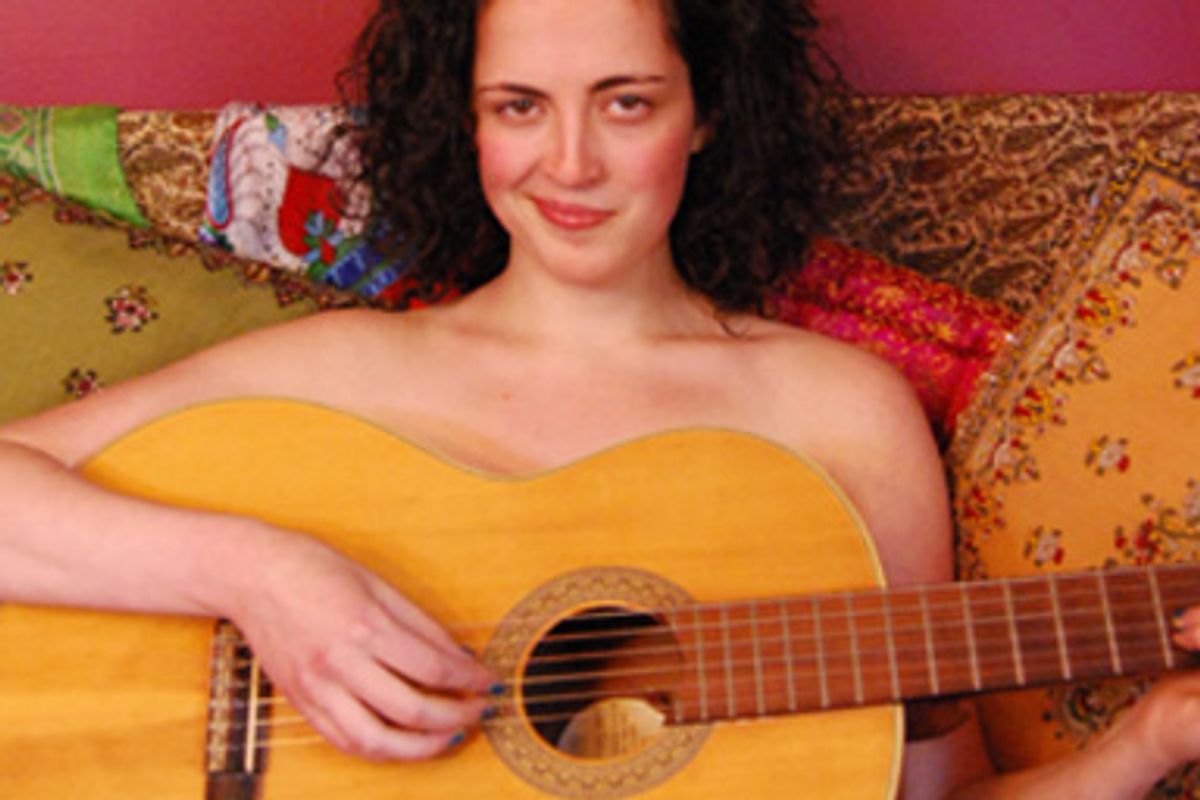 "I never thought I'd be one of those slippery-slope type of girls," writes 22-year-old Hannah Friedman toward the end of her debut memoir, "Everything Sucks: Losing My Mind and Finding Myself in a High School Quest for Cool," "but here I am, naked and wasted and puking up brown Jagermeister juice, waiting for the last acrid drop to come out so I can wipe off my nose and do another line."

This is not a sentence you expect to find in a young-adult book set at an elite private school. Not only is Friedman's writing striking for its blunt, unromantic realism; her prose also displays a self-aware wit that is all too rare in the genre. Amid a raft of fluffy, dizzyingly popular YA series and teen television shows about posh boarding schools and Manhattan's teenage elite, "Everything Sucks" provides a jolt of reality. Perhaps that's because this is a memoir rather than fiction, but also because Friedman, a recent Yale graduate and the winner of the New York Television Festival's "Flying Solo" Pilot Contest, has never had much in common with the spoiled kids of "NYC Prep." As we learn in "Everything Sucks," before winning a scholarship to prep school, Friedman grew up with a monkey named Amelia in a house where a minor argument could inspire her folk-rocker father to construct a shoe-shaped car and drive her to school in it. Her elementary school nickname? "That Monkey-Girl Freak."

When she arrives at Danforth Academy, Hannah vows to overcome her misfit past, befriending a gaggle of mean girls who make Tina Fey's villains in "Mean Girls" look mild, becoming president of her class and, eventually, dating a rich, handsome, popular boy. But her social success comes at a price: She develops an eating disorder and a cocaine habit, as her senior year becomes a blur of binges, purges and drug benders.

Yet if "Everything Sucks" is no "Gossip Girl," it's no "Go Ask Alice," either. Hannah and her friends are high-functioning anorexics, bulimics and pharmaceutical addicts: They struggle with angst and insecurity but never break the facade of impeccably groomed, honor-roll perfection they sacrifice their sanity to achieve. A fellow boarding-school survivor, I found Friedman's painstakingly honest portrayal of competitive, neurotic overachievers desperate to escape the pressure of parents, teachers and peers uncannily familiar. Her refusal to moralize or provide an easy resolution sets "Everything Sucks" apart from YA literature's preponderance of breezy, formulaic narratives.

Friedman points out that these stories of the rich and gorgeous don't just speak to prep-schoolers and bitter alumni. Even now that the economic bubble has burst, teen-oriented networks like MTV and the CW are milking every possible cent out of our fascination with rich kids. And the obsession isn't limited to kids: In recent years, boarding-school fiction has also been popular with adults, who devoured Curtis Sittenfeld's "Prep" and Taylor Antrim's "The Headmaster Ritual." As Friedman says, "It's pervasive in pop culture. It seems like every other person is Kim Kardashian or Paris Hilton, and that we should aspire to have a closet full of $900 shoes."

At a coffee shop in Manhattan's East Village, I spoke with Friedman about under-the-radar eating disorders, why she wants to encourage teen girls' creativity and what "Gossip Girl" gets right and wrong.

Why did you decide to write a memoir about boarding school?

This is all stuff I wish some big sister would have told me when I was in high school. There's a lot of great teen fiction, but it's very ... fictitious. It's fairy tales about idealized romances, and these girls don't have real problems. They're not worried about their period, or if their breasts are normal.

Does it feel odd to publish a memoir at such a young age, about a time that is only five years behind you?

It made sense to me to write this memoir now, because it's fresh in my memory. These people are still sometimes in my life ... or in my Facebook feed. I'm still in touch with those experiences and emotions. If I had waited until I was 40, I don't think it would be realistic. And teenagers deserve an honest memoir just as much as adults do.

You don't seem to hold anything back. In one scene, you're naked and vomiting. In another, you're abusing laxatives. Was it difficult to be that honest?

Once I decided I was going to write the book, I knew I had to go all-out. Especially with the eating disorder stuff. It's such a secretive thing that it felt cathartic to put it out there. When it's consuming you, you think you're the only person who has ever thought that way.

But in reality, every other girl at that school was having the same thoughts.

Right. But the facade is so beautiful that you never think that everyone else might be having the same problem.

If you don't weight 75 pounds and aren't throwing up five times a day, everyone assumes that you don't have a problem. When I went into therapy [after high school], my therapist told me, "You don't have to hate your body. You don't have to want to change it all the time. It's not normal to be on a diet." Everyone in my school was on a diet! It seemed like that's what it took to be a responsible woman.

It was a big deal for me to admit that I had an eating disorder, because I didn't feel like I deserved to have an eating disorder. I wasn't super-skinny. I didn't have that level of self-control. But I wasn't enjoying anything. At a wedding, I was worried about the wedding cake. At a birthday party, I was worried about the birthday cake. It took over my whole life. Once I started to address that, a whole other world blossomed of things I liked to do. I started playing music again and writing.

How much do you think these common, often invisible, eating disorders have to do with the huge, contradictory expectations we have for girls today? You have to compete in a man's world, but you also have to achieve these retrograde standards of beauty.

In your book, the guys at school didn't seem to care whether you gained five pounds or not. It was the girls who were putting that pressure on each other.

Absolutely. There's a very strange "frenemy" dynamic, where you share things with your friends, but they also are very critical and competitive.

Are you hoping that some girls will read "Everything Sucks" and recognize their own self-destructive habits?

I hope that girls read it and are inspired to evaluate their behavior. I would love to save girls the time I spent obsessing about weight. If someone reads the book and has that "aha" moment, it would make me so happy.

Since you write about your drug use without condemning it, do you worry that parents and teachers could see the book as a bad influence?

I suspect that just the fact that I say "fuck" in the book is going to upset some people. I tried to be as honest as possible, and I'm sure some people are not going to be happy about it. I hope they realize it's more valuable to talk about these things that actually do go on than to pretend they would never happen.

When I was in the DARE program, there was a very cartoonish characterization of drugs. Everything was bad. They showed videos of a joint and a heroin needle chasing kids around a playground. So when I saw people smoking marijuana, and they weren't evil or violent, I came to doubt all of that information. If you teach abstinence-only sex ed and kids see that some of their experiences are contrary to what they learned, they're going to think that everything that was taught to them was wrong. It's dangerous to give kids half-truths.

Why do you think we're still so obsessed with rich kids, even in the midst of a recession?

It's masochistic, I guess. The worst part is that it leads to everyone feeling deprived. Even if you're well-off, you feel like you don't have everything you should have. What I learned in boarding school is that even those people you meet who have seven fancy cars feel deprived in this sort of culture.

How accurate do you think shows like "Gossip Girl" and "NYC Prep" are at portraying the lives of prep-school kids?

I think one side of them is very accurate: the shopping, the partying. What they're missing is the real stuff -- the real emotions. You can't have that level of economic privilege and family detachment and not have emotional repercussions. On "Gossip Girl," sometimes Blair gets sad because Chuck dumped her. But she has no real depth.

They show a lot of the back-stabbing. But all the characters seem so self-assured, even when they're spurned by their social group. I don't think the hurt is really showcased.

What would you say to a 14-year-old girl who idolizes Serena and Blair?

I write in the book that I don't think people who really made a difference thought they would have changed the world if only they didn't have such icky, icky calves. Even if you reach this absurdly unrealistic level of perfection, that's all you have achieved: You look really nice. Once you start pursuing things that are more interesting to you, then you get to have fun instead of worrying about how you look.

Were you consciously trying to avoid those sanitized depictions of real issues we see so often in YA literature?

Yes. I also tried not to do what a lot of books and TV shows do, which is focus on the techniques: "I swallow cotton balls to fill up my stomach" or "I always chew ice." I tried not to put any weights or measurements in the book. Because I used to think, "She's 125 pounds in this book? Then I have to be 125 pounds."

I wanted to make sure I talked about the source rather than the symptoms. I felt really crappy about myself and I kept saying these terrible things to myself. I felt like a failure, like I was never good enough in any arena.

What do you hope teens who read "Everything Sucks" will take away from it?

Everyone feels like they're fooling everyone else around them a little bit. I was really plagued by the images from "Friends" and "Dawson's Creek" when I was younger, of these people who are best friends who call each other and throw parties for each other all the time. I was so convinced that there was something wrong with me because I didn't have that network.

You end the book with several pages of advice for girls who might want to be writers. Why did you decide to do that?