Our first black president is a Nazi? 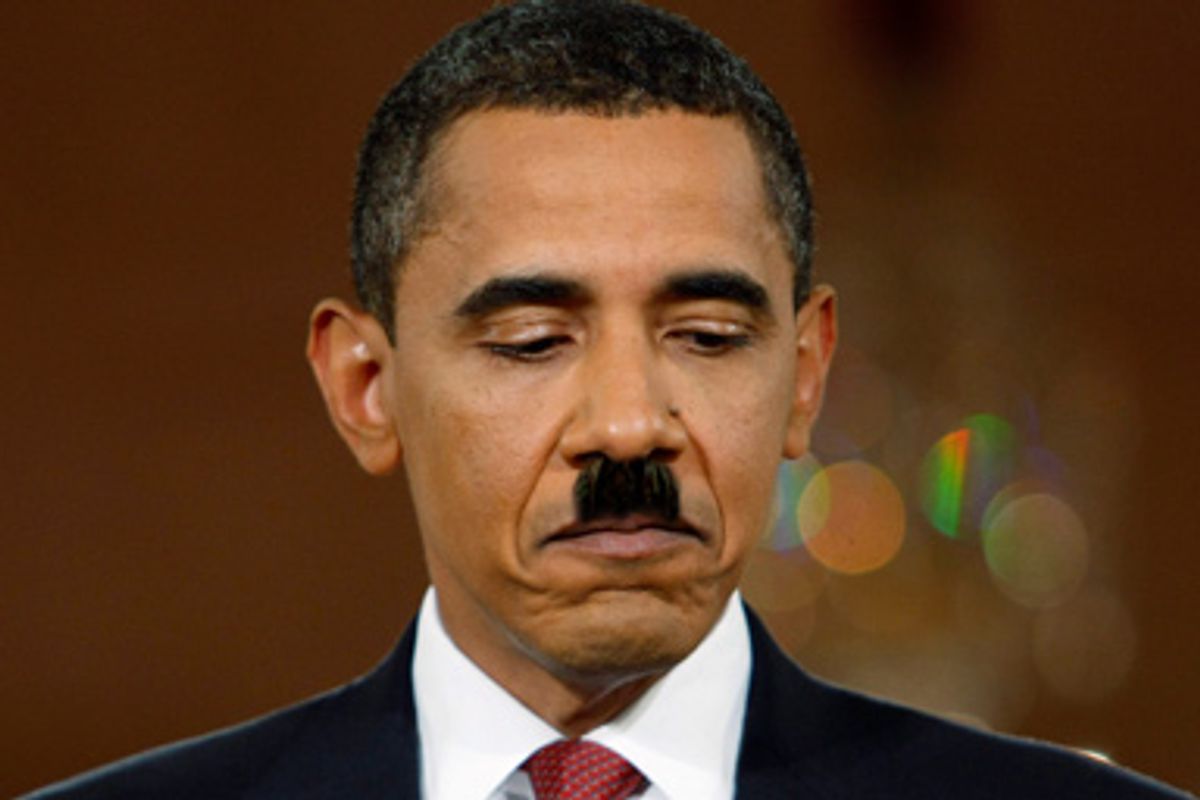 Who'd have imagined that our first black president would turn out to be a Nazi? Just when you think political discourse can't get any uglier, Rush Limbaugh is comparing President Obama to Hitler and calling all Democrats Nazis, while the frothing right-wingers turning Democrats' town halls into "town hells" routinely refer to Obama and his supporters as "brownshirts." Right-wing blogger Steve Gilbert has transformed Obama's healthcare reform logo into a Nazi symbol by cleverly adding a swastika; meanwhile, some Republicans insist Democrats are lying about "town hell" rowdies carrying signs with swastikas, but they're the ones with a problem telling the truth.

If you thought right-wingers' claim that Obama is a racist was projection, here's another case study for psychology students everywhere. At district meetings Democrats are being shouted down by angry mobs inflamed by corporate interests spewing lies about healthcare reform -- Maryland Rep. Frank Kratovil was hung in effigy. Rep. Tim Bishop needed a police escort to his car, Rep. Brad Miller reports death threats, while Republican Todd Akin of Missouri joked -- to cheers from his GOP audience -- that his Democratic colleagues "almost got lynched" by the "town hell" rowdies. Glenn Beck is joking about poisoning Nancy Pelosi's wine -- but it's the Democrats who are Nazis, fascists and brownshirts. Got it.

It was just a few years ago that MoveOn was pilloried -- by the mainstream media, not just the right -- when a couple of filmmakers used Bush-as-Hitler imagery in a video contest. MoveOn quickly took the videos down and apologized, but the controversy boiled for days. Sure, some on the left continued to refer to the administration as fascists or as Nazis, but they were mostly marginalized. Now two of the biggest right-wing pundits, with huge megaphones on the radio and Fox News, call Obama Hitler, and the media mostly shrug.

It may be that the Republican Party has reached such an all-time rhetorical and political low that reporters and pundits are having outrage fatigue. Maybe depicting a black president as both a Nazi and a racist barely shocks anymore. But the rhetoric and hysteria are getting worse, and mainstream Republicans really need to call it out.

To her credit, Republican columnist Kathleen Parker did just that in the Washington Post Wednesday, noting the distortion and even racism behind the worst attacks on Obama. She blamed it on the fact that "the GOP is fast becoming regionalized below the Mason-Dixon line and increasingly associated with some of the South's worst ideas." Noting the prevalence of "Birther" sympathies in the South, she concluded: "Southern Republicans, it seems, have seceded from sanity."

I've seen Republican leaders -- and even some thoughtful folks in my letters -- try to argue that these town-hall protests are a spontaneous display of populist anger, but I don't think that's true. Even if they aren't being paid by the insurance lobby to turn out at these meetings (and some of them may well be), these angry citizens are being mobilized by lies and shrill rhetoric. At Blue Dog Rep. Mike Ross' town hall, he was shouted down by a woman insisting Obama supports a single-payer (government) insurance plan, which is simply not true. Another woman began sobbing, talking about what her country has become, ending, "I'm scared!" They're being terrified by false claims that Obama is promoting mandatory end-of-life "counseling" (read assisted suicide), mandatory gender-change surgery (!) and aiming to eliminate private insurance. (Let's hope the unhinged turnout gets Ross to support the president, not the people mobilizing the folks shouting him down.)

The "town hells," in short, don't represent populism, they're a display of hysteria fed by lies peddled by GOP leaders and corporate interests. And it's getting worse.

In a related tangent, I was stunned by Editor and Publisher's report that AP, the New York Times and other news organizations quoted liberally from Pittsburgh health club murderer George Sodini's diaries, but left out his racist diatribes against Obama. The diary in fact began the day after Obama was elected, and Sodini wrote, "Good luck to Obama! He will be successful. The liberal media LOVES him. Amerika has chosen The Black Man." He then goes on to complain that white "hoes" are choosing black men over him. In the last four months we've seen three mass shootings -- the Pittsburgh cop killings, the Holocaust Museum murders and now this -- in which the murderer has ranted crazily about Obama. I worry with good reason that the Sodini assault won't be the last.