The dream life of Don Draper

The "Mad Men" are sweating bullets, but the show's hero is cool and collected. Is denial to blame -- or to thank? 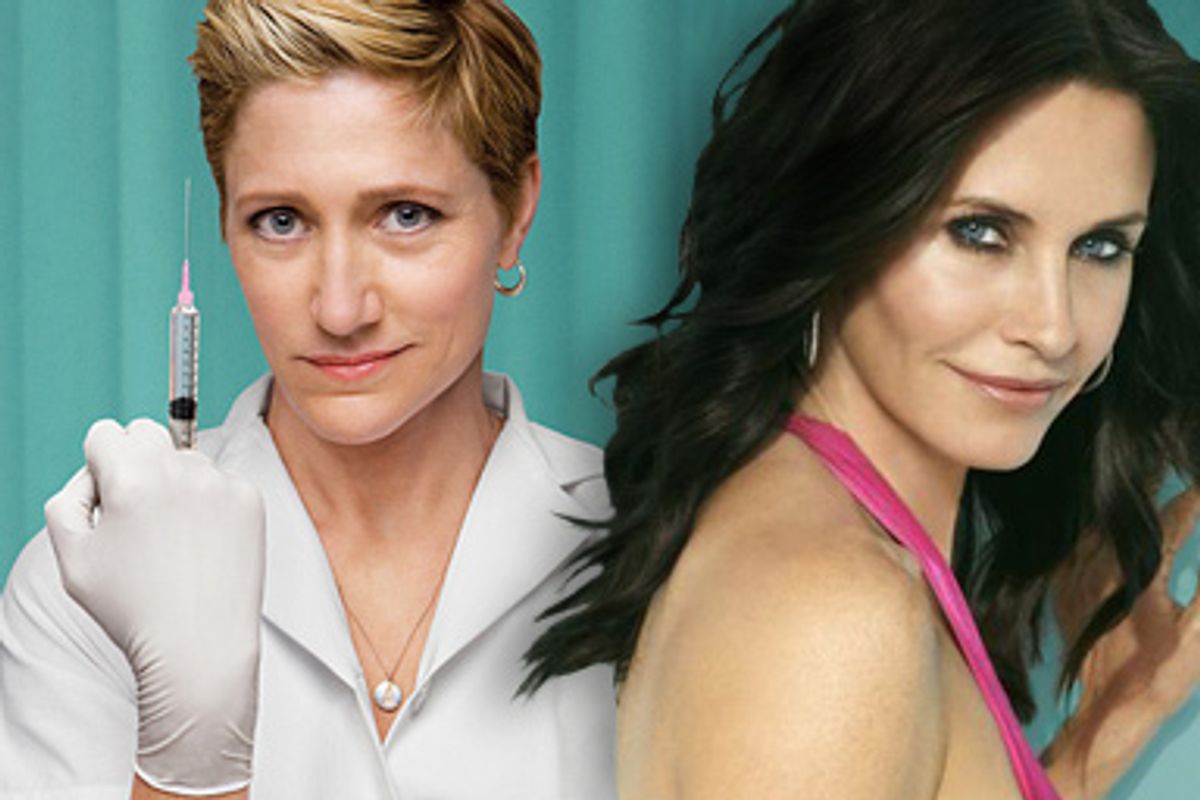 Responsibilities are really a mixed bag of nuts, one that's filled with lots of half-stale almonds and not nearly enough cashews. We need responsibilities to give our life structure. But when we get them, we tug at our scratchy collared shirts and whine endlessly about how carefree and artistically fulfilled and emotionally self-actualized we'd be if we didn't have quite so many stupid responsibilities taking up all of our time and making us miserable.

What we forget is that life without responsibilities is a formless void, an empty chasm that we trudge through listlessly, longing for to-do lists. We aim to roam the world like Goldmund, the pleasure seeker in Herman Hesse's "Narcissus and Goldmund," but instead we only lie on a dirty rug, trying desperately to conjure up the energy to walk down to the corner store for something chocolatey, filled with whipped cream.

Even so, life with responsibilities is just like one of those mazes made of bushes they put in British gardens for self-hating Brits to torture themselves with. One minute you think you're strolling along at a leisurely pace like the heroine of a Jane Austen novel, the next minute you're confused, bleeding, sobbing and covered in thorny brambles, and the last five hours are a complete blank. That, and you're surrounded by dirty laundry, hungry children, resentful domesticated animals and a drunk stranger who claims to be your spouse.

Why does God present us with such a lose-lose scenario, then chuckle behind His hands as we fall for it, over and over again? Because He knows we're bad, lazy people who deserve to suffer, that's why. Also, we make the funniest faces when we're suffering.

Just ask Don Draper of "Mad Men," which returns for its third season next week (premieres 10 p.m. Sunday, Aug. 16, on AMC). As you might expect, Don's (Jon Hamm) struggle with the push and pull of family life continues, but this time he seems a little more resigned to his fate than usual.

Of course, nothing could've hammered home his ambivalence more than Betty's (January Jones) unplanned pregnancy. Poised on the precipice of abandoning his family forever at the end of last season, Don changed his mind and returned home to his wife, only to discover that she was pregnant. This news meant he couldn't escape her again without being a heartless cad. Although Don is both heartless and a cad already, most of his actions still rest firmly in the mainstream. Ditching his family entirely would be another story.

But lest we start off this season hating Don more than ever, we begin with a scene that reminds us it's natural for someone as conflicted about his own adoptive, maladapted parents as Don is to be at war with himself over his role as a family man.

Then, we find Don heating up milk for Betty so she can sleep. We get it: He's going to play the supportive husband and do penance for his sins for as long as he can possibly stand it. Now remember, this is a man who surveys his family from a great distance, like someone flipping through old photographs. He looks at his children like they're mysterious, foreign creatures. He gazes at his wife with awe that shifts to repulsion and back again in minutes. Is she too good to be true, or is she the bane of his existence? He can't decide-- and neither can we. But the Don we're encountering in this first scene seems different: relaxed, sure of his role, comfortable.

"I just want everything to be perfect," Betty tells Don. Oh dear.

"Close your eyes," is Don's response -- and his method of dealing with how imperfect things actually are.

But instead of retreating to the kitchen for a double scotch, Don cuddles up to Betty and tells her to imagine that she's on a warm, sandy beach. Then he gets even more detailed. "As you slide your hands under the cool patch of sand beneath your deck chair ..."

"You're good at this," Betty responds with a smile, eyes closed.

You don't know the half of it, sister! Don's so good at storytelling that he's starting to take other people under his wing, to show them how to tell the stories they need to muddle through their own flawed lives. His first understudy is -- breathtakingly enough -- Salvatore Romano (Bryan Batt). First, on a business trip together, Don demonstrates to Salavatore what a smooth liar he can be over cocktails with a couple of new friends. Every time the conversation hits a snag or something makes him look bad, Don smooths it over or twists it into an advantage while Salvatore looks on, dumbfounded by Don's slippery skills. He's so suave that it starts to rub off on Salvatore, with mixed consequences. But even when things turn a little dark -- and when don't they, on this show? -- Don recovers quickly and gives Salvatore some thinly veiled pointers on how to lead a double life. The details will have to remain in shadow for the sake of suspense, but a theme emerges: In order to silence his own demons, Don seems determined to show everyone else how to silence theirs.

Meanwhile, former understudy Peggy (Elisabeth Moss) is acting more Draper-like by the minute. Along with a plum job as a copywriter, she has her own office now, and she's already condescending to her secretary, just like Don taught her to do. Peggy certainly isn't about to indulge Lola's gushing over the new British boss's assistant, John Hooker.

Lola: You know there's something about the way he talks. I could listen to him read the phone book!

Peggy: (Primly) Well, when he gets to S, I need Howard Sullivan at Leaver Brothers.

When Peggy tries to complain about the secretary to Joan (Christina Hendricks), Joan waves her off. "Oh god, I'm so glad I'll be out of here soon," she says, referring to her impending nuptials to that awful doctor. I smell trouble, girls, with a capital T, yes sir!

The presence of the British overlords in the office these days is sure to put its inhabitants on edge, and should be the source of plenty of cultural crossed wires and comedy this season. "I told him it was a stupid idea," Roger Sterling says of one of the boss's initiatives. "But they don't always get our inflection."

Speaking of confusion, everyone's favorite fake, Pete Campbell (Vincent Kartheiser), could be up for a promotion -- or maybe he's about to get axed, it's tough to tell which. And thank God for that, because watching Pete ride an emotional roller coaster may be the most entertaining part of "Mad Men." Pete beautifully demonstrates the mixed blessing that big responsibilities bestow on the average life: Just as everything is coming up roses, a swarm of Japanese beetles arrive, and Pete greets them like a swarm of locusts. Everything is personal and everything takes on biblical proportions with this guy.

"I can't live with this!" he says to his wife, Trudy (Alison Brie), blowing things out of proportion as always.

"But you'll try," she responds, ever the dutiful mommy-wife.

Don and Pete represent opposite sides of the same coin: Both chafe against the restrictions of adult life, and both have faked their way to the top in different ways. But while Don represents the benefits of extreme denial mixed with occasional sincerity, Pete shows us how it looks when you navigate an unfair world armed only with blind ambition and raging emotions that get the most of you regularly. While Don smoothly lies through his teeth without flinching, Pete stutters, fakes it, breaks down seconds later, and fools no one, not even himself. Don has occasional dark nights of the soul, sure, but Pete is awash in confusion and self-loathing, so much so that he can barely control himself.

These days, Don seems less confused than ever. Seemingly at peace with his double life, he's content to sell himself and everyone else a fantasy world as shiny and perfect as the ones he creates in his ads. As he assures the owners of London Fog, the raincoat retailer, on his business trip with Salvatore, "There will be fat years, and there will be lean years, but it is going to rain."

Into each life a little rain must fall? Is this Don trying to get philosophical on us about accepting our fates? Or has he learned to tell his story so well that he can't tell the difference between fantasy and reality?

Whatever it takes to get by, right? After all, some of us really aren't cut out to tackle huge responsibilities, no matter how much we might tell ourselves otherwise. Instead of holding down serious jobs, getting married and having children, we should, by all rights, be lying on our backs in the middle of our living rooms, whimpering softly about how badly we want to eat something chocolatey, filled with whipped cream. Here's hoping that, if we whine loudly enough, someone will eventually save us.

I Like To Watch Jon Hamm Mad Men Television