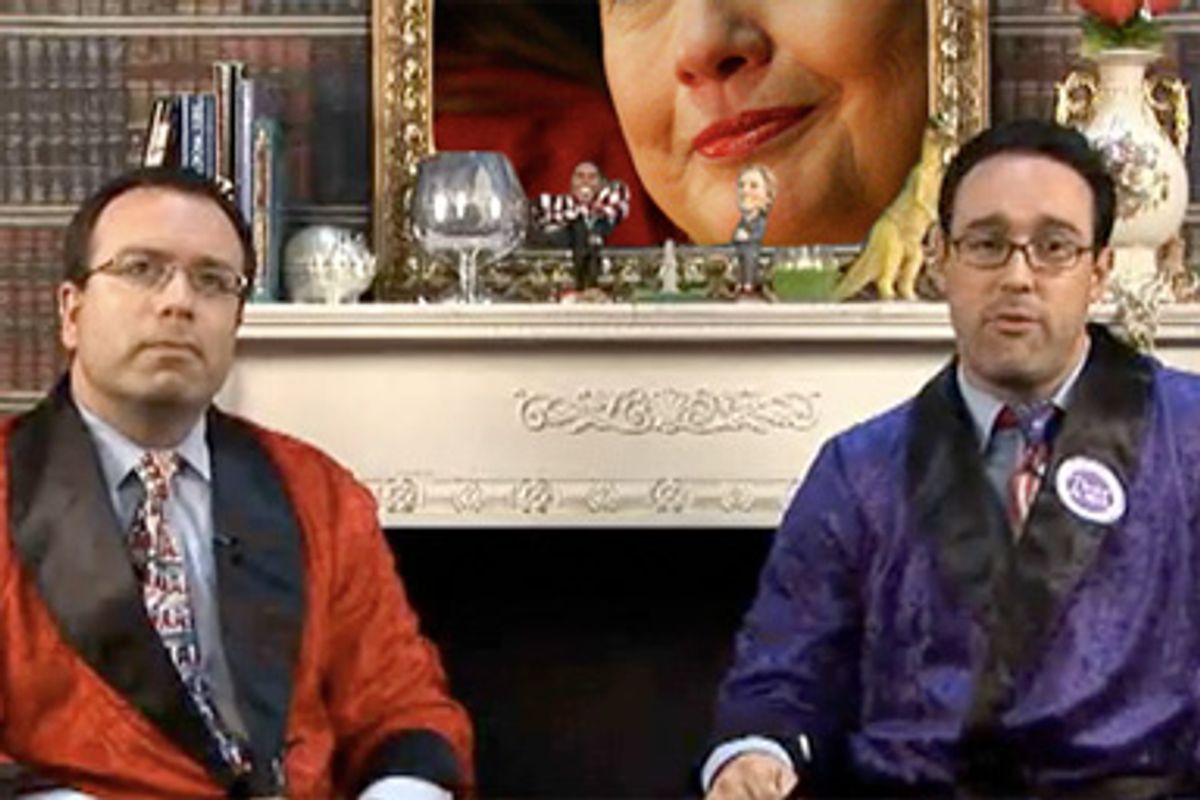 The curtain went down this past week on "Mouthpiece Theater," a tacky experiment in political parody that made its video debut on the Washington Post Web site early this summer. The immediate lesson was perhaps, as one colleague put it, that it is not easy to turn grey ladies into colorful and funny young men.

In an attempt to out trope the "Saturday Night Live" send-up of Masterpiece Theatre, the Post turned loose two popular political reporters, Dana Milbank and Chris Cillizza. The two sat side by side in sleazy smoking jackets and had at us. As you might expect, about half the material focused on schoolboy preoccupations with sex. A White House luau provided the opportunity to put Nancy Pelosi in a coconut shell bikini top; it was suggested that Harry Reid needs to have an affair; Arlen Specter’s sex appeal was dissected and Mark Sanford and John Ensign were pilloried. It was all too stupid for words.

The fact that neither man nor the Washington Post were embarrassed by such silliness is a sign of the desperation newspapers feel as they fail to compete with or understand new media and the "Hardball" or "Morning Joe" mentality of cable TV.

Things came to an end for the two Posties when they decided to ride the “beer summit” wagon with far less grace than the chubby Clydesdales in the old Anheuser Busch commercials. Playing on the beer brands chosen by Henry Louis Gates Jr., Sgt. James Crowley and the president when they met July 30, they suggested beers for other political figures. “Bitter Woman From Hell” is assigned to former GOP Rep. Chip Pickering, whose wife Leisha is suing him for divorce and has filed an alienation of affection suit against a woman with whom the representative had an affair. The Pickerings have five children. Louisiana Republican David Vitter gets a mug of "Happy Ending"; his name was found in the D.C. madam’s phone book. Sarah Palin chug-a-lugs "Arctic Devil."

Hillary Clinton, of course, gets the worst treatment. While not mentioning her by name, her photo flashes on the screen as Milbank says, “And we’re not going to tell you who gets a bottle of ”Mad Bitch.”

Milbank and Cillizza were criticized almost immediately after the video went up on July 31 by Brian Beutler of Talking Points Memo, and the Post took the video down the same day, providing no information about the reason on the Web site. Post Communications director Kris Coratti e-mailed the following explanation: "The video was a satiric piece that lampooned people of all stripes. There was a section of the video that went too far, so we have removed the piece from our website.”

Blogging ensued. The Columbia Journalism Review raised the appropriate ethical concerns: Who was minding the store at the Post, how did the piece get vetted in the first place, and are the Post's standards the same for Web stories and print stories. The Post stonewalled and made no response. The unrepentant duo then videoed a faux apology with Milbank appearing swathed in gauze symbolizing how badly he had been beaten up by the censors. He proceeded to answer questions from Cillizza with nonsense nursery rhymes. Poor boys ... not allowed to speak their minds.

Feminist bloggers then got organized, with Alternet's Adele Stan taking the lead, bringing together women in media through various listservs, e-mail and Twitter. Woman, Action and the Media (WAM) circulated a letter to Post executive editor Marcus Brauchli, asking for an explanation and disciplinary action against the reporters, citing the video’s “misogyny” and a “general spirit of meanness that is outrageous to find on the Web site of the paper of record for our nation’s capital.” (Disclosure: I am one of the 32 signers of the letter.) Was the letter warranted, or was it a knee-jerk whiny feminist p.c. reaction to nothing more than the usual silly boy humor falling flat? Even some women disagreed: Clara Jeffrey, co-editor of Mother Jones, thought the problem was that the skit wasn’t funny. “Had Stephen Colbert or Jon Stewart unleashed a Mad Bitch/Hillary joke it would have come and gone without backlash.” Salon's King Kaufman agreed that the idiocy of the skit was its real crime.

Slate’s Jack Shafer came to the defense of the two Post journalists and waved the flag for risk-taking journalism. Canceling the video program tells reporters, “Don’t take chances, don’t push the envelope.” One would think we were talking about publishing classified government documents like the Pentagon Papers rather than taking a toy away from children too immature to use it correctly. A few days earlier Shafer whined -- when was the last time you heard the verb whine used for a man? -- “Will nobody stand up for Dana Milbank and Chris Cillizza’s asinine horseplay?” He added, “Has it come to the point that you can’t call the secretary of state of the most powerful nation on earth a mad bitch in a comedy segment without people becoming unhinged?”

Nobody came "unhinged," Jack, but the answer is: Many woman, and men, have moved beyond a gentle, tut-tutting reaction to Men Behaving Badly in real life. After all the mean-spirited and sexist slurs directed at Hillary Clinton and Sarah Palin during the 2008 elections, women and gentlemen are no longer going to silently allow pot shots at women to go unchallenged. When Chris Matthews claimed Hillary would never have gotten to the Senate had her husband not “messed around,” and his fellow MSNBC commentator David Shuster characterized Chelsea Clinton's poised and intelligent campaign appearances as being “pimped out” by her parents, both had to apologize.

Of course, both men and women in the media can be unnecessarily nasty. Perhaps my Catholic school experiences influence me, but men seem to find taunting powerful women particularly enjoyable. Male journalists are starting to realize they need to develop a sense of the distinction between legitimate criticism of a woman’s work, and sexually charged schoolyard tantrums. Many are beginning to realize they must forgo the fun of calling the secretary of state, arguably the most powerful woman in the world, a "Mad Bitch" if they want positions of influence in the world of ideas.

At the week’s end, Milbank and Cillizza took off for much needed vacations. A seemingly kinder, chastened Cillizza conveyed his apologies in an Aug. 6 Fix column. He admitted that “name calling is never the stuff of good comedy." He noted that to err is human and to forgive divine. It was a very nice piece, and I for one am going to take him at his word. While on vacation, however, a daily spoonful of castor oil might be an appropriate cleanser, chased down of course by a good beer.