This is your brain on retouching 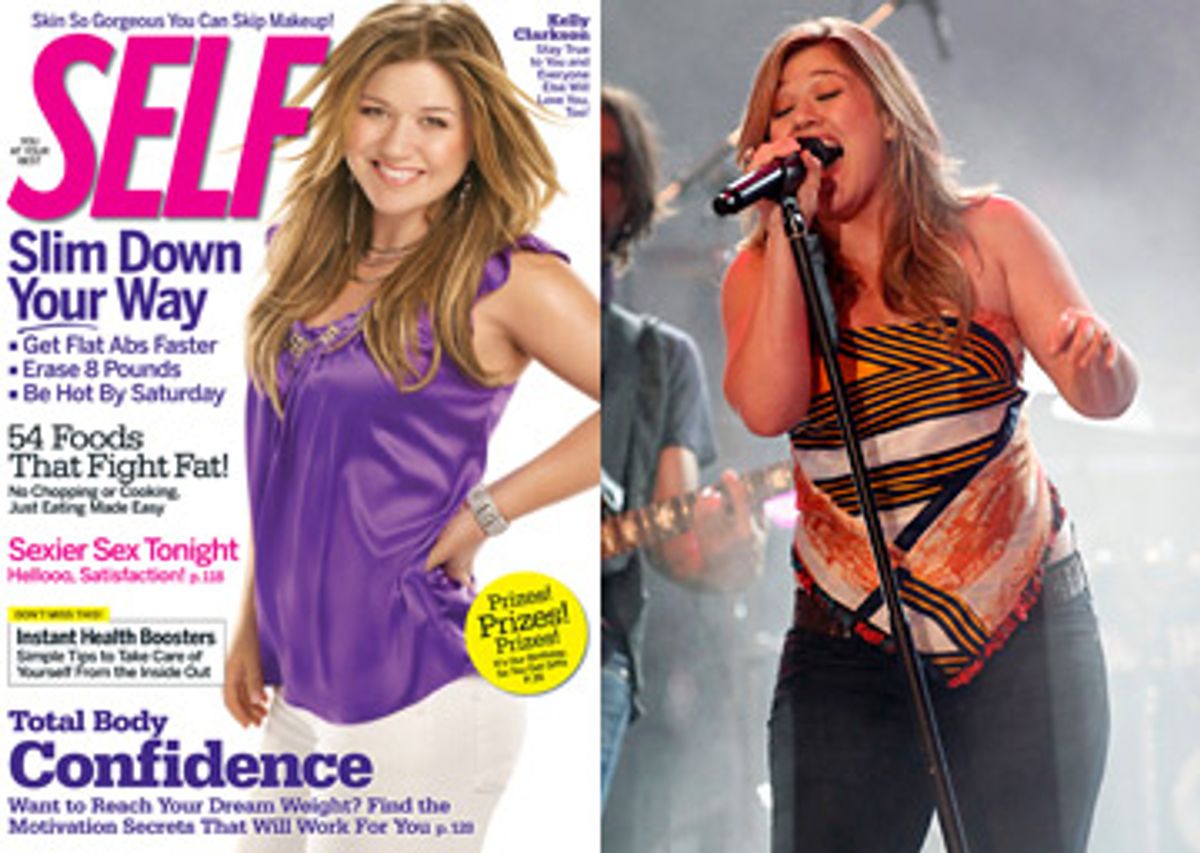 We know that the women's magazines are notorious for tweaking the truth when it comes to images. We also know that Kelly Clarkson has the audacity to walk around with a BMI that puts her out of the range of the average eight year old gymnast. So it's no surprise that the high-assed woman in skintight white pants on the cover of the new issue of Self magazine doesn't quite jibe with the somewhat more bootylicious version of the "Idol" icon we know and love.

What is, however, so flat out hilarious it's sad is editor Lucy Danziger's defense of the overenthusiastic alteration in her blog this month.

As she explains, a fashion photograph of a hair-styled, made-up, retouched celebrity is “not, as in a news photograph, journalism.” Fair enough. But while insisting that “the truest beauty is the kind that comes from within” and that “Kelly says she doesn't care what people think of her weight,” Danziger explains that the cover photo is meant to “inspire women to want to be their best.” Best in this case being the creation of a computer program – a look at the video of the photo shoot reveals a bubbly, charming and obviously meatier Clarkson than the one who graces the same cover that exhorts readers to “Slim down your way” to “be hot by Saturday,” eat “54 Foods that Fight Fat!” and have “Total body confidence.” That Clarkson is smiling, sculpted, and with the tagline “Stay true to you and everyone else will love you too!” Oh, irony, you are lost on Lucy Danziger!

After boasting of altering Clarkson's appearance to make her look her “personal best,” Danziger says “in the sense that Kelly is the picture of confidence, and she truly is, then I think this photo is the truest we have ever put out there on the newsstand.” And in the sense that I can imagine healthcare reform and sexing up Nathan Fillion, that too is as true as anything out there on the newsstand.

Adding fuel to the dustup, Self's editorial assistant Ashley Mateo blogs furthermore that “No one wants to see a giant picture of some star's cellulite on the cover of a monthly mag -- that's what we have tabloids for!”

Clearly it never occurred to anybody that perhaps the tabs wouldn't do such a bang-up business on those shock horror flab photos if the women's magazines weren't turning their cover girls into freaky mangatars. Nobody expects a glossy monthly to run a "gotcha!" cover. But the argument that images can't be glamorous and aspirational without being utterly unrealistic is not just lazy, it's painfully dumb. And in the outraged comments to Danziger's post, Self readers have said just that, calling the September cover and its apologia “pathetic and shallow” and “a huge mistake.” The same women who adore Sarah Haskins and read Jezebel and can make a cosmetics star of an earthy YouTube vlogger can handle a less bizarro world image of their cover girl.

So close your eyes and imagine for a moment a world in which a beautiful, talented woman could grace us looking like herself. Several worlds away from the hub of body image dysfunction that is the Conde Nast building, here's the real Kelly, two days ago: