Is Tarantino good for the Jews? 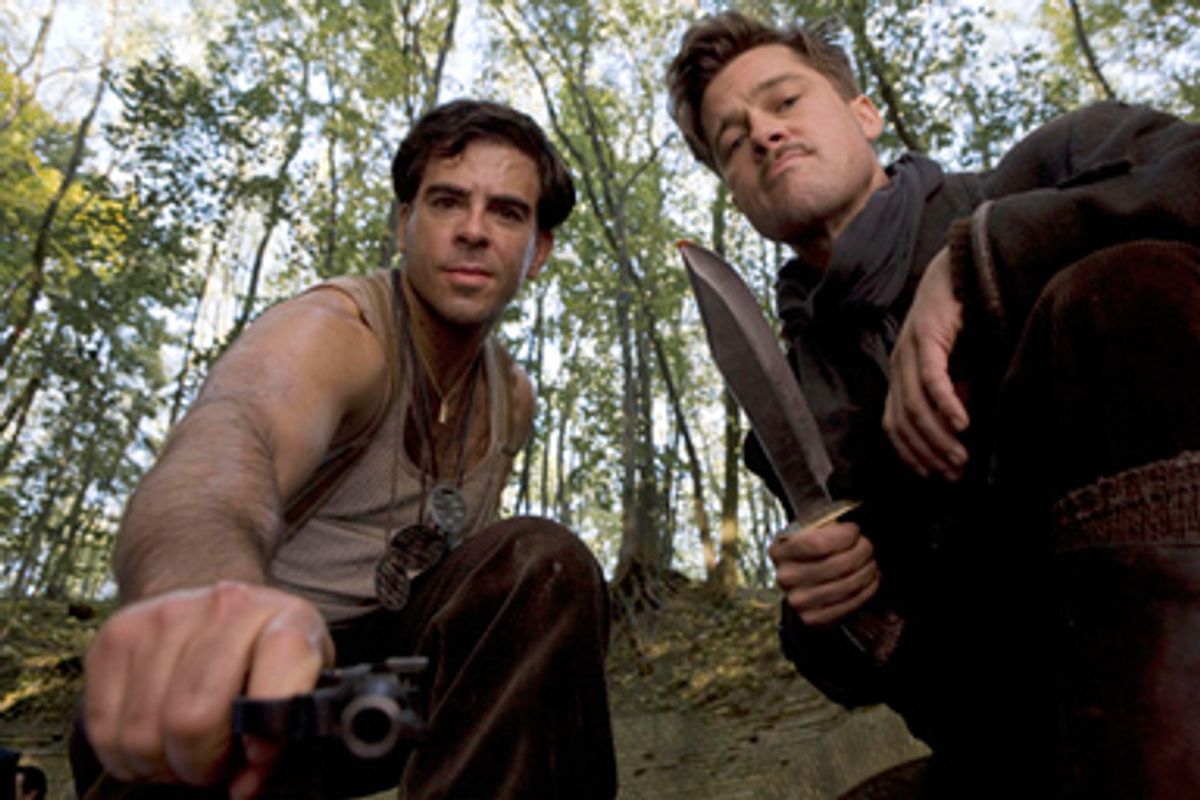 There are going to be plenty of discussion topics revolving around Quentin Tarantino's "Inglourious Basterds" in the next couple of weeks. Some of these just concern the question of whether QT's typographically impaired World War II actioner is a subversive, genre-defying masterpiece -- as some people appear to believe -- or, say, an incoherent and brainless mishmash made by a director who has forgotten that even movies about movies should have some dim and distant connection to human life, and furthermore should not be boring. (Am I tipping my hand here a little? Just a tad? Not me. Stephanie Zacharek will review next week.)

Then there's the question of how Tarantino deals with the most sacrosanct of WWII-movie topics, Jewish suffering and the Holocaust. Most obviously, he deals with it by barely dealing with it at all. We witness a French Jewish family murdered by the Gestapo, in a tense prologue that seems tonally and thematically unconnected to the rest of the film, but there are no packed boxcars heading to Treblinka, no Nazi bureaucrats discussing the Final Solution. If you've heard anything at all about this movie, though, you know that its premise -- OK, one of its 26 premises -- is that a group of American Jewish guerrillas, under the command of an unscrupulous Tennessee redneck named Lt. Aldo Raine (drastically overplayed by Brad Pitt), parachute behind enemy lines to wreak vengeful mayhem on the minions of the Third Reich. "Ever' mayun unner mah command owes me one hunnert Nah-tsee scalps," Raine intones.

Now, the movie has so much other stuff going on -- in-jokes about the Nazi-era German film industry, Mel Brooks-style portrayals of Hitler and Goebbels, competing plots to blow up a Paris movie theater -- and Tarantino's attention span is so short that the Basterds' orgiastic, anti-Nazi violence is more talked about than shown. "Hostel" director Eli Roth plays Donnie Donowitz, a semi-legendary guerrilla dubbed the "Bear Jew" by his German foes, but to use a venerable Jewish expression, it's basically shtick. Donowitz is a big, dumb, borderline-psychotic Red Sox fan armed with a Louisville Slugger, and it's impossible to say whether he's splattering German brains over the French countryside to avenge the children of Warsaw or just to get his ya-ya's out.

Maybe that's the point, of course. A full discussion of Tarantino's approach to morality and ethics is well beyond the scope of this particular blog post, but let's suggest that A) He is not overly concerned with conventional understandings of such things, and B) he finds mythical, almost tribal versions of morality encoded in the B-movie tradition. "Inglourious Basterds" is so far removed from the reality of World War II that I'm not sure it's really about Jews or Nazis at all, but let's face it: A non-Jewish filmmaker depicting over-the-top Jewish revenge fantasies is deliberately mashing people's buttons.

Film critics and responsible authority figures in both Germany and Israel have almost unanimously announced that they dread "Inglourious Basterds," and can't see how it will contribute anything positive to the dreary world of post-Holocaust discourse. (I'm sure Tarantino is delighted with that response.) On the other hand, Tarantino's producer Lawrence Bender, upon reading the screenplay, told the director: "As your producing partner, I thank you, and as a member of the Jewish tribe, I thank you, motherfucker, because this movie is a fucking Jewish wet dream."

That quote comes amid a long, rambling and painfully honest bout of soul-searching from Atlantic political reporter Jeffrey Goldberg, who was evidently moved and troubled by "Inglourious Basterds," in alternating waves of passion and intellect. Goldberg has some street cred when it comes to Jewish revenge; he joined the Israeli military, he says, as a direct result of the anti-Semitic persecution he endured on the playgrounds of Brooklyn, N.Y. [UPDATE: I originally said that happened in the 1940s, when Goldberg was not yet born. The mistake arises from the bewildering phrasing of Goldberg's article, in which he fantasizes about parachuting into Auschwitz and killing Josef Mengele.] He came out of the film, he writes, "so hopped up on righteous Jewish violence that I was almost ready to settle the West Bank -- and possibly the East Bank," but then started to feel queasier about it over the ensuing few days.

Early in his article, Goldberg waxes euphoric over Tarantino's "emotionally uncomplicated, physically threatening, non-morally-anguished Jews dealing out spaghetti-Western justice to their would-be exterminators." But by the time he's finished, Goldberg has backed away from this exercise in "kosher porn," to use Eli Roth's resonant phrase, and quotes Hollywood scholar Neal Gabler to ask why Tarantino "conventionalizes Jews, puts them in the same revenge motif as everyone else." Doesn't that risk creating audience sympathy for their Nazi victims? (One should of course say "German victims"; it's intellectually lazy and historically inaccurate to assume that German soldiers are all Nazis, but that level of ambiguity does not register in the Tarantino universe.)

German avant-garde filmmaker Alexander Kluge and Hollywood Elsewhere blogger Jeffrey Wells make substantially the same argument (and I bet the two of them have never appeared in the same sentence before). Kluge, who has spent much of his 50-year career dealing with the legacy of the Holocaust in German life, told the Israeli newspaper Haaretz that the crude, ahistorical distortions of a movie like Tarantino's "can obscure the events' true significance." Wells goes much further with an intriguing close reading of an early scene in "Inglourious Basterds," after Raine and his men have captured a German sergeant (Richard Sammel) and are about to deliver him to the "Bear Jew" and his baseball bat. (You can see a little of this scene in the "Basterds" trailer posted below.)

Wells' anti-Tarantino fulminations may be a bit over the top (although they make highly entertaining reading), but he's right about the tensions and internal contradictions of that scene, which go right to the point of reversing its moral polarities. Pitt and Roth's characters "behave like butt-ugly sadists," Wells writes, while the German soldier, despite cursing out his tormentors as "Jew dogs," behaves like "a man of honor," accepting a brutal and painful death rather than ratting out his comrades. In Sammel's brief performance, Wells says, he depicts the German as "a man of intelligence and perception" with "a certain regular-Joe decency," while Raine and Donowitz come off as unhinged horror-movie villains. (Wells' post has engendered a fascinating range of agreement, disagreement and debate.)

In his Atlantic article, Goldberg opines that no Jewish filmmaker would ever concoct such a brazen, violent and preposterously disconnected revenge fantasy (although it's worth reconsidering "Hostel" in light of the fact that Eli Roth's grandparents were Holocaust survivors). Wells implies, but doesn't quite say, that the net effect of "Inglourious Basterds" may be anti-Semitic, in its depiction of Jews as deranged, unscrupulous killers. My own view is that Quentin Tarantino has no serious opinions or convictions whatever regarding Nazis or Jews or the Holocaust. Beneath all his B-movie genre-worship, Tarantino remains a pomo disciple of Jean-Luc Godard, playing an elaborate game of bait-and-switch with his audience and seeking to disarrange the conventional stories -- or stories about stories -- we've got in our heads. More simply, he's just fucking with us.