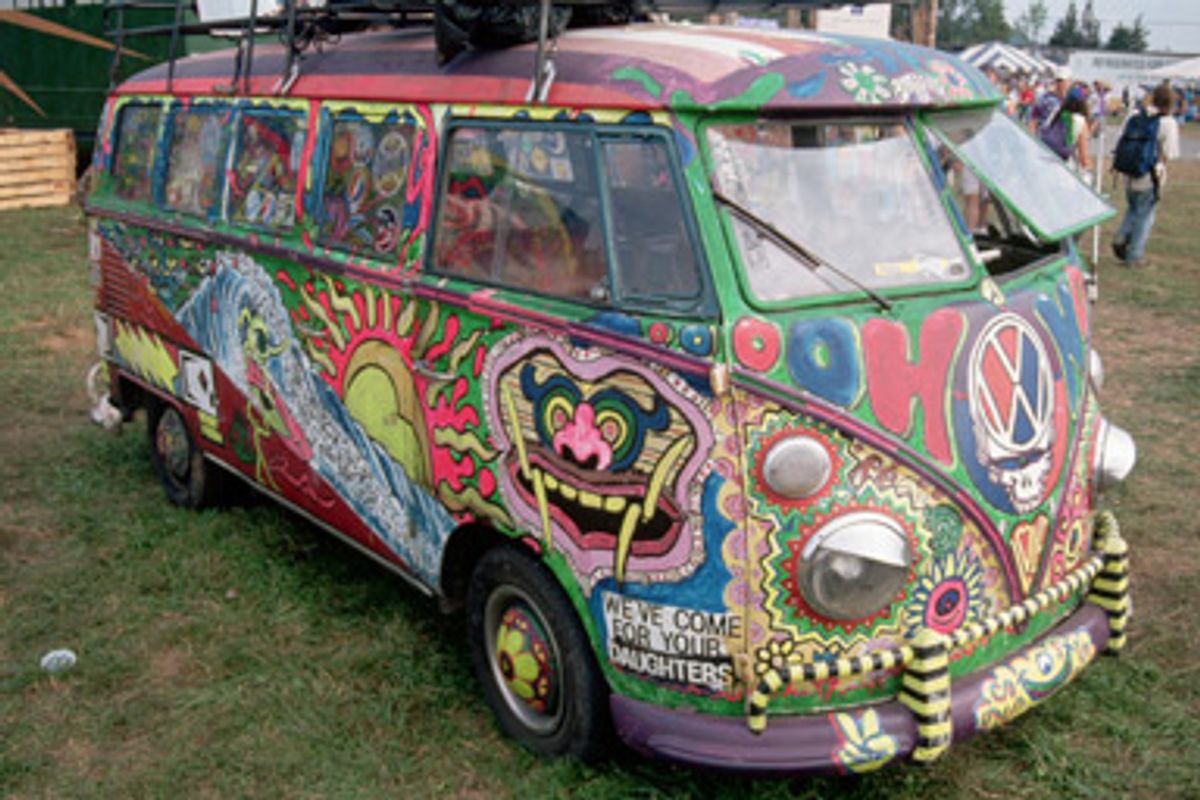 Forty years ago this weekend, over 500,000 people descended upon Max Yasgur's farm in Bethel, N.Y., for a three-day music festival. Miles of ink have been spilled in the years since then mythologizing the mud, the bad acid trips and the music, and creating something fresh out of this cultural legend is not an easy task -- even for an Academy Award-winning filmmaker like Barbara Kopple.

Nevertheless, this week VH1 is airing Kopple's new documentary, "Woodstock: Now & Then" (premieres Friday, Aug. 14, at 9 p.m. on VH1 and VH1 Classic, and Monday, Aug. 17, at 8 p.m. on the History Channel), a historical portrait of the festival interwoven with a look at its impact on young musicians today.

For the “Now” portion of the movie, Kopple focuses on a group of young musicians from Paul Green's School of Rock. Their musical skills are impressive, and their nerdy knowledge of Janis Joplin and Keith Moon suggests that Woodstock’s legacy stretches beyond aging hippies.

As for the "Then" segments, Kopple interviews many of the key figures of Woodstock, including festival producers Michael Lang and Artie Kornfeld, who conjure a compelling picture of the hectic days before, during and after Woodstock, when it seemed like everything was hanging on a thread of pure happenstance. Kopple also uses memorable footage from Michael Wadleigh's Oscar-winning movie "Woodstock" in her film. The iconic scene of Jimi Hendrix playing his version of the Star-Spangled Banner to 40,000 people and fields of deserted trash never gets old, and Kopple uses it with resonant results. The guitar's wailing solos and frenzied feedback represent a decade of sadness and chaos, marked by assassinations, segregation and the Vietnam War.

Salon spoke with Barbara Kopple over the phone about the ongoing interest in Woodstock, current-day festivals like Burning Man, and her documentary.

Why did you make this movie?

What could be cooler than to do a film about Woodstock? It’s got the greatest music, the best stories, and fascinating characters, and always an unexpected turn of events. Little miracles and moments that are funny or pure inspiration.

Where were you during Woodstock?

I was studying and working. I was not at Woodstock, but I feel like I was.

Why did you choose the “now and then” angle for this particular film?

Music, I think, is what bonds everybody together, and here were kids who just totally embraced the music of Woodstock -- [the students of] School of Rock knew everything about it , loved it, and idolized Keith Moon. Loved Janis Joplin. It just seemed so natural that you would want something to happen with the next generation.

Why do you think Woodstock is still relevant today? Why should kids who weren't born yet care about it?

I think Woodstock is still relevant today because people really care about what’s happening in our world. People want to be part of something. People want to be part of a community. People want to have that same kind of ritual that everybody has, and to be able to see it with people who were really fighting for something. They were fighting against the war, they were fighting to have life be much better. They wanted to be free, they wanted to get away from their jobs, and to be able to stand in the mud and enjoy themselves and listen to great music. What can be more relevant than that? Because I think all of us want that in our lives. We still have some of the very same issues that we’re dealing with. We’re still dealing with war. We’re still dealing with many of the same kinds of things that the generation of 1969 was dealing with.

There's a section in the movie where you focus on the women's sexual liberation at Woodstock, and at one point, it's referred to as a "women's festival."

Yes, Greg Jackson, who was the reporter from ABC, called it a "women's festival." To me, it's like "yes!" That's what it made it so much different than Altamont and a lot of the other festivals that followed it. It was gentle, it was soft. Michael Lang and Artie Kornfeld and others picked the Hog Farm [commune] as the people who were going to take care of the security. People would just come up to you and talk to you and hug you and stop any fights they could with laughter and with love. That's just a whole different way of thinking.

What do you think the ripple effects of that were? How did it play into the political, social and cultural realm after Woodstock?

I think every generation really searches for that common understanding. You know, to be able to shake off the rules, to be able to be together in a real community, and to take care of each other. I mean, in the way the film really talked about the drugs, and Wavy Gravy would help with one person, and that person, when he felt better, would help the next person. And it just kept going round and round, that whole sense of caring for your brothers and your sisters. And that's very rare, particularly when seeing 400,000 people together.

I thought it was interesting that you included the election of Obama in the film. Are you saying that Woodstock set the stage for that?

Well, I think once again, we have that feeling of hope, that things are going to be OK. We had a really bad period. And now that Obama's been elected, and so many people from all different facets worked on it, young and old. People gave up their jobs to be able to be part of it. I think you're seeing something that's very different, that people realize that they have to go out and they have to do things, and they have to make change in their lives for it to happen.

So why haven't we seen something like Woodstock duplicated?

Well, I think maybe it's happened in the Burning Man, and other festivals. But you know, it's so hard to duplicate something that happened in such a magical and spontaneous way. Each festival and each generation -- I mean even think about [the Woodstock revival festivals of] '94 and '99 and how different they were. The amazing part of it was that each person said, "This is our Woodstock, this is our festival." And they took possession of it. People would pull up on a bus, as they were entering the grounds, and they would just yell, "This is our Woodstock! This is the one that we care about!" It's great to take possession.

How did the original "Woodstock" movie, directed by Michael Wadleigh, fuel the continuing mythology of Woodstock?

Well, i think "Woodstock: The Movie" was one of the finest, grandest movies imaginable. And if that movie had not been made, none of us would really know that this event happened. We wouldn't have felt the people, we wouldn't have seen the mud. We would’ve heard about the groups that played, but we wouldn't be up close and personal, right under them. I mean, Michael Wadleigh filming as well as the other DPs on the film -- it was so intimate, it was so extraordinary.  It just propelled you on a journey.

Jacqueline Linge is an editorial fellow at Salon.