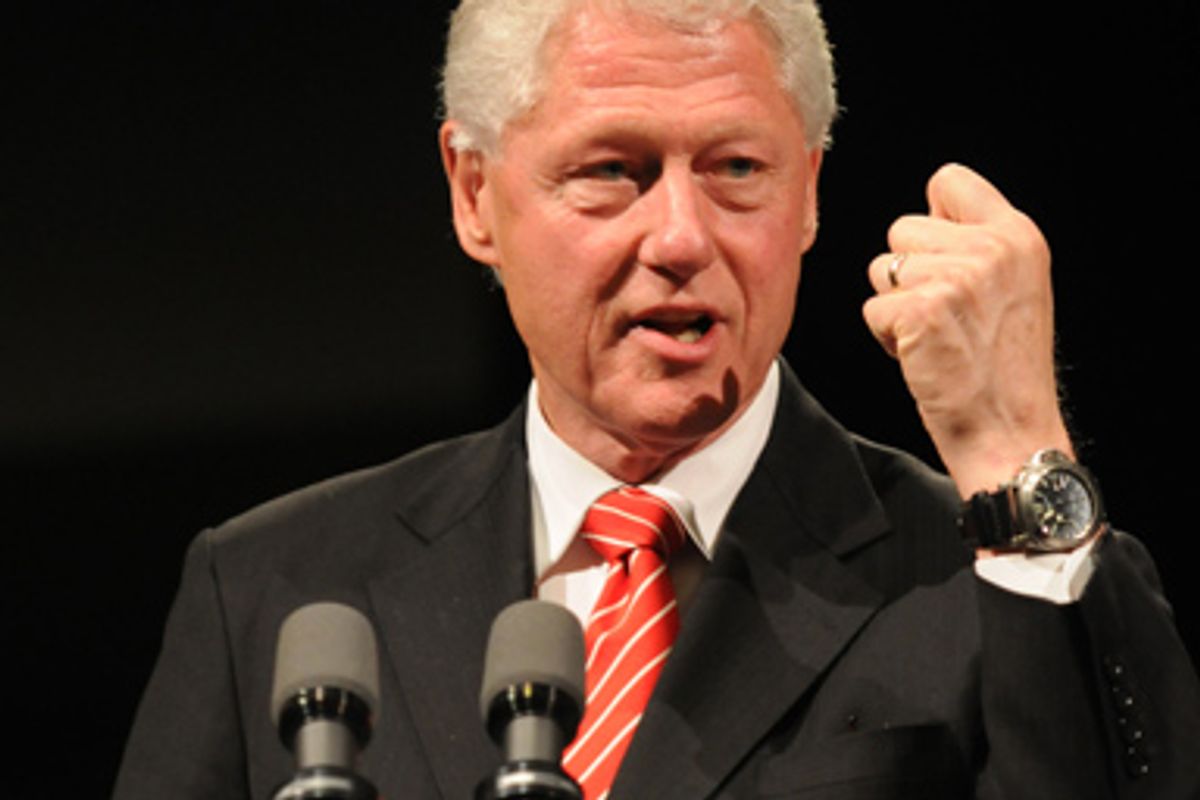 Bill Clinton was cruising along Thursday night, building up to the big finish. Giving the keynote speech at Netroots Nation, the convention of liberal bloggers, the former president was laying out a theory that put the current angry opposition to healthcare reform smack in the middle of a 40-year continuum of Republican tactics based on fear and resentment. It's a subject he knows well; like few Democrats before or since, the former president proved adept at turning his opponents' aggression against them.

But not long after he'd recounted for his listeners, few of them out of grade school at the time, how the GOP had turned backlash into votes in the late '60s, and called Richard Nixon's "Silent Majority" phrasing a racial "code signal," and just after he'd paid George W. Bush's "compassionate conservatism" a very backhanded compliment -- "a brilliant slogan that reflected his gut understanding that the country had changed, they wouldn't tolerate overt racism" -- Clinton got derailed.

"We need honest, principled debate," Clinton began, tweaking the current incarnation of the GOP for a strategy he said amounted to just sitting around waiting for President Obama to fail. And then, suddenly, he was interrupted, by a shout from someone upset about Clinton's support for the military's "don't ask, don't tell" policy on gays and lesbians and the Defense of Marriage Act more than a decade ago. "You know, you ought to go to one of those congressional healthcare meetings," Clinton shot back, lumping his attacker in with the town-hell rabblerousers. "You'd be really welcome."

And yet, he couldn't quite let a funny line speak for itself and get the speech back on track. Instead of returning to his attack on the GOP, Clinton spent the next six minutes justifying himself, still fighting the old battles of centrism vs. progressivism that split the Democratic Party during his administration. (For the record, he said he regretted "don't ask, don't tell," but pointing his finger at the man who interrupted him, he blamed the left for not pressuring Congress to help him overturn the military's ban on gays, and he said he only signed the Defense of Marriage Act to keep a "reactionary" Congress from doing something worse.)

That Bill Clinton came to Pittsburgh at all was a recognition of the power the Netroots and the party's liberal activist base wield in today's Democratic politics. A few years ago, it would have been hard to imagine a former president of much of anything accepting the invitation to speak; by 2009, it was hard to believe Obama hadn't felt the need to drop by last year's session to help rally the troops for the fall campaign. Clinton gave credit where it was due. "You hold the seeds of a genuine revolution in our public life, and you do it by mobilizing people and generating emotion, but also by getting people to think," he said. "People trust you -- even people who read you who don't agree with you, they believe that you believe what you put down. They don't believe that you fudge the fact, they believe that you're being straight with them."

Clinton had ambled in a little late, but the crowd had already been warmed up by the time he showed up, in part by 90 minutes of speeches by lesser luminaries, and in part by an ample supply of Yuengling beers and Humboldt Fog cheese, subsidized by the American Federation of State, County and Municipal Employees, the union that sponsored a cocktail reception before the keynote session. (AFSCME's president, Gerry McEntee, kicked off the evening program with a video message that opened with a profane parody of the union.) The former president was on most of the speakers' minds.

"I hope that we can commit tonight to make sure that [Clinton] is not sitting on the sidelines of this great battle against the conservative movement," said Simon Rosenberg, president of the New Democratic Network and a former Clinton staffer, as he introduced his former boss.

But clutching his glasses in his right hand and gesturing at the audience with his left, Clinton sometimes made for an odd juxtaposition with a crowd that sprung up, partly, in reaction to his "triangulation" tactics. He didn't always find the right tone to rouse the crowd, and he kept citing his own work since leaving the presidency as examples of what sort of action the country needs on issues like healthcare, climate change and America's image abroad. (At least no one tried to ask him what his wife, Secretary of State Hillary Clinton, thought about those topics -- unlike some of the crowds she faced on a tour of Africa this week.) The speech was vintage post-presidency Clinton, with its frequent glances back to display a mastery of the details of policy and political struggles, no matter how many years ago they first took place. Clinton weighed in on current debates, too, saying healthcare reform must have a public option if it's going to work.

And the "don't ask, don't tell" stretch of his speech turned out to be a proxy for much of the rest of the 53 minutes -- it often amounted to a riff on the theme of not letting the perfect become the enemy of the good. "I want us to be mindful that sometimes we may have to take less than a full loaf," he said. That alternated with a countermelody implying that many of Obama's policies now -- on education, on national service, even on healthcare -- are just the culmination of what Clinton started. "I have been waiting 40 years for this point," he said toward the end of the talk.

Clinton also suggested that progressives had the opportunity to dominate American politics for the next 40 years. But for someone describing such a historic juncture, he seemed -- cautious. "Trying to hold the president's feet to the fire is fine, but first we have to win the big argument," Clinton said about the healthcare fight, which many progressives now worry could be heading toward the same fate it met 15 years ago. "It's ok with me if you want to keep everybody honest. But try to keep this thing in the lane of getting something done. We need to pass a bill."

In other words, Clinton may have come to Pittsburgh, but his vision of incremental change hadn't changed much since the era of "don't ask, don't tell." By the time Clinton was done speaking, and the crowd drifted out, to the sound of "Dancing in September," by Earth, Wind & Fire, he'd made clear that he still didn't plan on surrendering -- not to the Republicans, but also not to the Netroots. Whether Obama shares his predecessor's belief that any action on healthcare reform is still a victory remains to be seen. Clinton, of course, never had the chance to declare one back in 1993.