What makes the teen star's rump-shaking performance depressing isn't that it's shocking; it's that it's so familiar 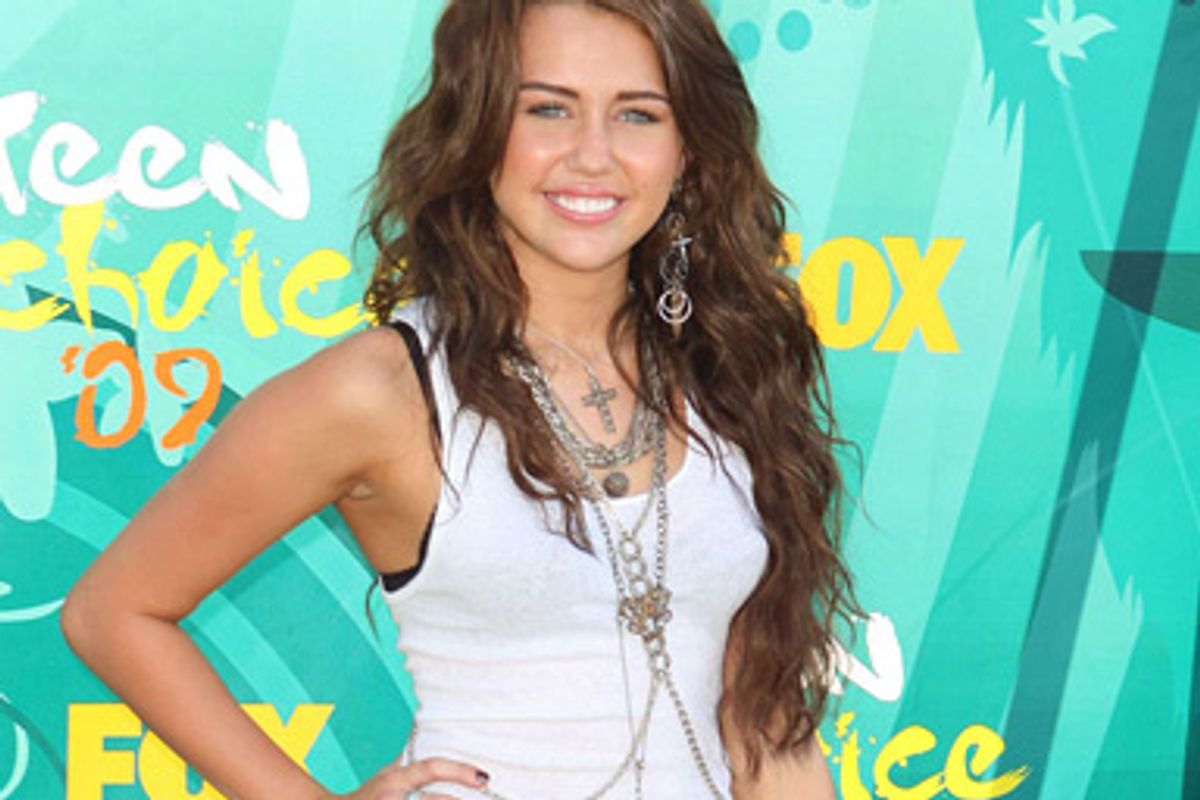 The Miley Cyrus Teen Choice Awards debacle is the pop culture gift that just keeps on giving. To recap: Sunday evening the most famous 16 year old in the world showed up on the red carpet in a high-heeled, bra-flaunting, crotch-skimming ensemble. She then changed into shiny short shorts and boots to perform "Party in the USA," a routine that featured her at one point cavorting around a pole on top of an ice cream truck. Disney teen queen plus stripper accoutrements? Let the frothing begin!

Since Broadsheet first wrote about it on Monday, the web has lit up with criticism of the routine with expected vigor and surprising durability. As of this morning there are now 2,750,000 Google entries for “Miley Cyrus + pole.” There have been over 1,300 articles written on the subject. The LA Times said the performance went "too far and too low." The NJ.com parenting blog referred to it as “idiocy” and “bad behavior.”

Cyrus, like any other girl, is negotiating that murky era between childhood and womanhood – she just gets to do it in front of the world. Being sexual is part of being 16, even for America’s sweetheart. But though Cyrus did indeed strut around and, at one point, dip it down low, the more salacious moment came earlier in the song, when she shimmied with a quartet of aggressively rump shaking would-be Scores girls. Cyrus, for her part, told MTV before the show that her performance was intended to represent her southern roots and “being so proud of where I’m from.”

As the mother of two girls myself, I generally try to avoid knee jerk “what about the chiiiiiiiiiildren?” horror. And I firmly believe the only person whose job it is to be their role model is me. Nevertheless, there is something undeniably dispiriting about watching a young woman whose songs celebrate intelligence and ambition shaking her ass like any other prefab Pussycat Doll. What makes Cyrus’s performance depressing isn’t that it’s shocking; it’s that it's so fucking familiar. It’s that homogenization of eroticism, the way that the gentleman’s club is the template for so much of what passes for entertainment from a female, that’s such a bummer. It’s the choreographic crutch of Britney. Beyonce. Fergie. Rihanna. It’s not enough to have looks and talent, whatever your age, you should probably also dress and move like you carry your wages in your thong.

When my 9-year-old daughter watched the clip today, she was underwhelmed, declaring the dancing “just okay.” She had no judgment, and I didn’t suggest one. She did however ask me why her idol was dancing in her underpants. Cyrus herself is likely equally unruffled. Right on schedule, “Party in the USA” debuted yesterday in the Billboard Top 40.