Nuns on the run from the truth

Why won't the leadership of America's nuns meet with the survivors of sexual abuse by nuns, and hear their stories? 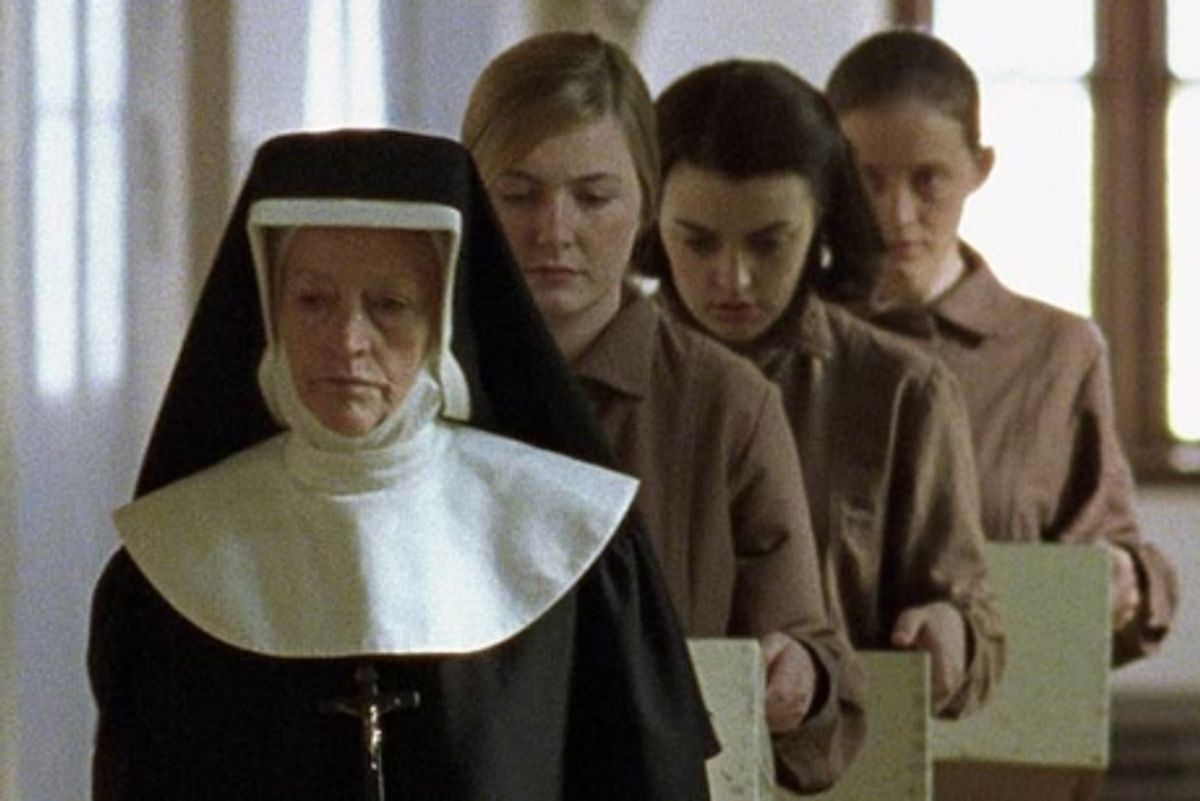 "This past week, the Leadership Conference of Women Religious, which represents 95 percent of the orders of Catholic sisters in the U.S., held its annual meeting in New Orleans. The main topic on the agenda was the Vatican's current investigation of the doctrinal deviations they believe may be rampant among the sisters who were freed of strict control in dress and living arrangements following the Second Vatican Council in the early 1960s.

Nuns, it seems, are no longer as obedient as the Vatican would like. One sister I know is a clinic escort at her local reproductive health clinic; others are active in gay and lesbian ministries and one, close to 90, has been a leader in the movement for sex worker rights. They fasted for the Equal Rights Amendment, spoke out in favor of women priests and choice, marched with Martin Luther King, and thought John Paul II was a disaster.

We -- feminists and progressive Catholics -- love them. And so we were surprised when the LCWR leadership refused to allow survivors of sexual abuse by Catholic sisters to address the past few annual meetings. The survivors want to share their stories of abuse as well as suggest processes to prevent such abuse in the future, including recommending that the sisters adopt the bishops' anti-sex-abuse guidelines. To date, the nuns have just said no. Even the bishops allowed the survivors time on the agenda of their annual meeting some five years ago when the clergy sex abuse scandal was at its peak.

What was wrong with these sisters who have worked for democracy in the church, the rights of the poor and marginalized, and just about every social justice issue you could think of? Were they in denial? Afraid of the publicity?

Barbara Blaine, co-director of SNAP, the Survivors Network of those Abused by Priests, told me that she couldn't understand LCWR's unwillingness to listen to survivors. "It's such a bad move. Even if they weren't sincere it would make more sense to invite us, listen politely and then ignore us. Stonewalling just makes them look bad." Blaine, a survivor of sexual abuse by a priest, organized two demonstrations calling on LCWR to hear the survivors. One was on Aug. 10 at the LCWR headquarters outside D.C., and the other was Aug. 11 in New Orleans, where the group was meeting.

SNAP is dogged in its pursuit of abusers and those who cover up for them and pulls no punches when they do get meetings. They believe that keeping the light of publicity on long-ago abuse is essential in drawing out victims who have been silent for 20 to 40 years.

The cases emerging now fall in that category. They happened in the 1950s, '60s and '70s, and the nuns who perpetrated the abuse are old or dead. Congregation leaders claim that the sisters are not able to defend themselves. The average age of the nation's 59,000 nuns is 69, and many of the sisters at the LCWR meeting were around when the abuse took place. Perhaps it is simply too painful to listen to the stories of what boys and girls just like the ones you taught and cared for experienced at the hands of your friends. Much better to remember the Bing Crosby and Ingrid Bergman versions of religious life, when every nun was angelic and floated down the aisle or the hospital corridor with a slight breeze wafting through her veil.

In the U.S., many Catholic women remember their days in Catholic girls' schools and colleges as among the best times of their lives. For me, a working-class girl educated in the 1950s, the sisters were important role models. They were tough and sometimes strange, but they included the best-educated women I had ever met. They encouraged smart girls to go to college (Catholic ones, where we would not "lose" our faith) at the same time as they made sure our skirts were a couple of inches below our knees and we didn't wear make-up.

But a few were really crazy. They hit kids, mostly boys; they banged kids' heads against the blackboard when they gave the wrong answer. Nobody reported them to child protective services as abusive, and most of us dared not complain to our parents, who would have smacked us around for annoying Sister. The other nuns did nothing to stop the volatile ones. That was just the way it was. I remember the day in eighth grade when Sister Margaret ordered a classmate who was tall and had big breasts to follow her into the bathroom and take off her bra. Sister was convinced that Joanne was wearing a padded bra and being a temptress. When they returned, Sister's face was red and somehow we got the message that the bra was not padded. Sister had the decency to apologize.

Instances like this were child's play compared with some of the stories told by boys and girls abused by U.S. sisters at the same time as lucky girls like me were flourishing in Catholic girls' schools. Pamela Miller, a reporter for the Minneapolis Star Tribune, reported on a press conference of survivors of nun abuse held in June 2006. Five women who were among a dozen Minnesotans and an "estimated 400 men and women who have recently come forward to talk about being sexually abused by nuns" told their stories.

Mary Dunford, 67 at the time of the press conference, told of being molested in her bed at Villa Maria boarding school. "It happened after lights out," she said. "She'd kiss me on the mouth then take her clothes off down to the waist and have me kiss and suck her nipples. She told me she loved me." Dunford said she was unable to talk about it until her 50s, when she realized it was at the root of her depression and other problems.

The reluctance of the Leadership Conference to hear from survivors like Dunford might be understood in Dunford's recounting of what happened when she contacted the religious order and reported the abuse. To its credit, the order acknowledged the abuse and agreed to pay for counseling for Dunford and her husband. It also returned her tuition. In what was certainly meant to be an act of reconciliation and closure for Dunford, the order arranged for Dunford to meet with the nun who had abused her. Dunford recounted the incident to Miller. "We talked about how what she had done had damaged us. When we were done she said, 'You weren't the only one hurt.'" The abuser's superior was present and reached out to the sister and said, "I love you and support you." Dunford was stunned. "There I was, the victim, and the sympathy was for the perpetrator."

Psychologists as well as church leaders believe clergy and nun abuse is largely a thing of the past, a time when nuns and priests entered religious life in their teens and had "arrested sexual development." New cases are less likely, but old cases and memories die hard. Women and men abused by nuns are now coming forward and suing the perpetrators and their orders. And the same old stories of cover-ups and reassignments that we lived through with priests are emerging with nuns. This past May, Gerald Kobs brought a suit against the Sisters of Mercy for having covered up abuse by one of its members, Sister Norma Gianni. As a result of the cover-up, Gianni was able to abuse Kobs and other children at St. Patrick's grade school in Milwaukee. The nun was recently released from jail after serving a year on sexual abuse charges. The suit charges that Gianni had previously abused children at a Catholic school in Chicago, been sent for inpatient psychiatric treatment by the order, and when released was sent to Milwaukee, where her past abuse was kept secret from parents.

Thirty years ago, some apologists for abuse by nuns and priests say, we simply didn't understand that sexual abusers were hard to cure. Perhaps. But certainly we knew what cruelty was and what it meant to violate the dignity of children. Alongside what appear to be individual cases of abuse – the lone priest, brother or sister who sexually abused a single child in the dark of the night – has come to light the large-scale institutional abuse of children entrusted to orphanages, schools and other residential centers. In those cases, every member of the staff knew that children were being harmed, and all were complicit.

Thirty Catholic residential centers and 107 individuals in U.S. centers have been accused of large-scale systematic abuse of children in their care. In May 2009 an Irish government commission on child abuse released a report on abuse in that country. The commission heard testimony from over 1000 people who claimed abuse between 1936 and 1970. Many had been residents in 60 Irish reformatories and industrial schools run by the Catholic church with government money. The commission concluded that the children were treated more like slaves and prisoners than human beings, subjected to beatings, rape, forced oral sex, public nudity and other forms of degradation. Many of the same communities of nuns who have been charged in the U.S. are charged in Ireland.

If I were a member of one of those communities, I'd like to pretend these things didn't happen or claim they were isolated incidents. The urge to stand with the sisters you have lived with for 50 years or more is strong. But it is the survivors and victims of this abuse who must come first. Let's hope that SNAP doesn't have to picket LCWR next year.