One of the most shameless practitioners of Washington whoredom reflects the sleaze that drives political outcomes.

After Tom Daschle was selected to be Barack Obama's Secretary of Health and Human Services and chief health care adviser, Matt Taibbi wrote:  "In Washington there are whores and there are whores, and then there is Tom Daschle."  One could easily have added:  "And then there's Lanny Davis."  Davis frequently injects himself into political disputes, masquerading as a "political analyst" and Democratic media pundit, yet is unmoored from any discernible political beliefs other than:  "I agree with whoever pays me."  It's genuinely difficult to recall any instance where he publicly defended someone who hadn't, at some point, hired and shuffled money to him.  Yesterday, he published a new piece simultaneously in The Hill and Politico -- solemnly warning that extremists on the Far Left and Far Right are jointly destroying democracy with their conduct in the health care debate and urging "the vast center-left and center-right of this country to speak up and call them out equally" -- that vividly illustrates the limitless whoring behavior which shapes Washington generally and specifically drives virtually every word out of Lanny Davis' mouth. 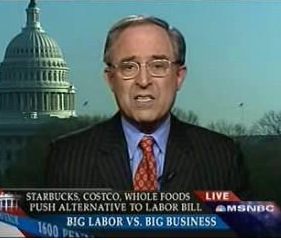 Davis' history is as long and consistent as it is sleazy.  He was recently hired by Honduran oligarchs opposed to that country's democratically elected left-wing President and promptly became the chief advocate of the military coup which forcibly removed the President from office.  He became an emphatic defender of the Israeli war on Gaza after he was named by the right-wing The Israel Project to be its "Senior Advisor and Spokesperson."  He has been the chief public defender for Joe Lieberman, Jane Harman and the Clintons, all of whom have engaged his paid services.  And as NYU History Professor Greg Grandin just documented:

Recently, Davis has been hired by corporations to derail the labor-backed Employee Free Choice Act, which would make it easier for unions to organize, all the while touting himself as a "pro-labor liberal."

Davis was also the chief U.S. lobbyist of the military dictatorship in Pakistan in the late 90s and played an important role in strengthening relations between then President Bill Clinton and de facto president General Perez Musharraf.

If Lanny Davis were just another Beltway lobbyist/lawyer piggishly feeding off our political system by serving whatever corporate interests happen to rent him, all of this would be too common to bother noting.  But Davis parades around as -- and is treated by media organizations as being -- some sort of political pundit as well.  He's presented by numerous media outlets as an independent analyst who opines on the news of the day -- yet does so almost exclusively in order to promote the interests of those who are paying him, relationships which are often undisclosed.  Here's how he describes himself to clients and potential clients on his bio page at the firm, Orrick, where he's a partner:

He has been a regular television commentator and has been a political and legal analyst for MSNBC, CNN, Fox Cable, CNBC and network TV news programs. He has published numerous op-ed/analysis pieces in the New York Times, the Wall Street Journal, the Washington Post and other national publications.

In other words, if you pay Davis to shill for you, he's able to exploit those media platforms to advocate for your interests while pretending to be an "analyst."  When the Israel Project issued a Press Release announcing his hiring in the middle of the Israel-Gaza war, they pointedly touted that he "is Available Immediately for Interviews on Israel/Gaza and More."  Though his service to the Israel Project was volunteer work, that's how it works in general:  you drop coins in the slot in Davis' back and he dutifully goes forth on television and in newspapers and recites what you feed him.  In their Press Release, they proudly noted:

Now a Washington, D.C. attorney, Mr. Davis is also a weekly columnist and frequent political analyst on major broadcast and TV cable shows, including NBC, ABC, CBS, CNN and Fox News Channel, and is and op-ed contributor to The Wall Street Journal, The New York Times, The Los Angeles Times and leading blog sites such as The Huffington Post, TheHill.com and FoxNews.com.

Davis' new piece in The Hill and Politico demonstrates how this works.  Presenting himself as the Responsible Liberal-Centrist, he warns of what he calls "The Dangerous Joining of the Far Right and Far Left."  He argues that "the extreme left and extreme right share more in common than those on their own side of the ideological divide when it comes to the issue of health care."  In order to defeat the extremists on both sides "who threaten our democratic traditions and institutions," he pompously assumes the voice of Thomas Paine and issues this call to action:  "When the far left and the far right join in the Politics of Hate and Demonization, it is time for the vast center-left and center-right of this country to speak up and call them out equally.  Silence is no longer acceptable by responsible liberals towards the reckless far left or by responsible conservatives towards the reckless far right.  Silence is complicity."

As for the monsters of the Right, Davis lists "the shouters shouting down other people who wish to speak at town meetings, whacko 'birthers,' and liars inventing 'death panels' and obscenely and recklessly mentioning Adolph Hitler and Nazi symbols to scare people."  And who are the equivalents on the Left?  The people who do this:

on the far left -- including the most vicious posters on the so-called liberal blogosphere, threatening businesses with one or more executives who offer personal ideas for achieving national health care reform different from the Administration's or Democratic congressional leaders' versions (full disclosure: I support all of President Obama's core principles for national health care legislation, though I still have many unanswered questions); hateful e-mails, phone calls, blogs, and personal attacks, distorting alternative ideas different from the Administration's approach and attacking the motives of those airing them; and intolerance for anyone who disagrees, including personal invective and demonization of those with different views.

Plainly, this whole rant has no purpose other than to argue that "the Left" is as bad as the screaming, gun-wielding right-wing townhall Limbaugh followers.  Why?  Because some progressives, in the wake of Mackey's anti-health-care-reform Op-Ed, organized a boycott of Whole Foods, Davis' client (that's all Davis means when he complains of "threatening businesses with one or more executives who offer personal ideas for achieving national health care reform different from the Administration's or Democratic congressional leaders' versions":  they're harming the business interests of my paid client).

But there's no disclosure whatsoever that Davis here is doing nothing more than spewing outrage on behalf of a corporation that pays him (even as he deceitfully inserts the phrase "full disclosure" into the middle of his rant-- and then proceeds to "disclose" nothing other than his allegedly pro-Obama bona fides in order to make his attacks on "the Left" seem more credible).  All Davis is doing here -- as usual -- is fulfilling his whore duty:  Whole Foods dropped coins in his back slot and therefore he defends them by demonizing critics of its CEO.  But readers of The Hill and Politico have absolutely no idea of Davis' real motives or his relationship to the corporation he's defending because both he and those magazines conceal that relationship.  Instead, readers are misled into believing that he's an independent analyst who -- though a "liberal" himself -- just so happens to object to progressive campaigns against health care opponents because he's such a sincere, objective and responsible-centrist advocate for civility and fairness.

The overlap between -- and deliberate blurring of -- political power, media opinion-making, and large corporate largesse is unlimited now.  The aforementioned Tom Daschle just spent an hour this past Sunday on Meet the Press ostensibly to analyze the health care reform debate despite the fact that, as Time's Michael Scherer documented, Daschle currently works for numerous health insurance industry interests, relationships completely undisclosed during the entire one-hour health care program.  Between Richard Wolffe, the Pentagon's military analysts, Gen. Barry McCaffrey, Daschle, and Davis, one wonders if NBC News ever presents any "political analysts" who are free of undisclosed conflicts of interest.

What makes all of this particularly notable is that the centerpiece of Barack Obama's presidential campaign was putting an end to this type of corporate influence over our political debates -- particularly when those influences are concealed.  Just marvel at how clear Obama promised to conduct health care negotiations out in the open in order to ensure that undisclosed pharmaceutical and insurance industry interests did not drive the process:

Obviously, as David Corn recently complained, none of that has even come close to happening.  There is substantial debate over the role the Obama White House played in the apparent death of the "public option" -- did it happen against their wishes or with their blessing? -- but all one can do is guess at that question because, contrary to his crystal clear and oft-stated campaign pledge, the negotiations that lead to that collapse were completely secret.  What one does know is that the pharmaceutical industry is so delighted with what they think will be the ultimate plan that they are spending vast sums of money to advocate for it, preceded by a secret White House deal with that same industry to ensure there are no government negotiations for better prices (a result that, when combined with mandates to buy health insurance, would vastly increase the profits of these industries).  Indeed, it's difficult to recall a single piece of major legislation recently enacted over the objections of the large corporate interests that control and own the American political process.

Lanny Davis is just a face that reflects the grime and sleaze that lies at the core of our political culture.  But it's a rather vivid face for what is typically meant by Centrism (i.e., it's shrill and irresponsible to suggest there's anything fundamentally wrong with our political culture); Civility (it's rude and disrespectful to highlight the oozing conflicts of interests and paid whoredom which animate our leading political luminaries); and Bipartisanship (the same narrow set of corporate forces always prevail no matter which party is in "control" by constantly paying those who control those parties).  As unpleasant as it is, that's why there's value in casting one's eyes on how Lanny Davis functions.

UPDATE:  Politico reports on Mike Huckabee's incoherent "response" to my post from yesterday on how he is bashing American foreign policy while on foreign soil, in Israel -- something that has, in the past, been declared a grievous sin when done by others (such as Al Gore, the Dixie Chicks, Jim McDermott and others).  I may (or may not) have more to say about Huckabee's response tomorrow.