The rumors of her penis were greatly exaggerated, but the star is still becoming one of rock's great gender benders 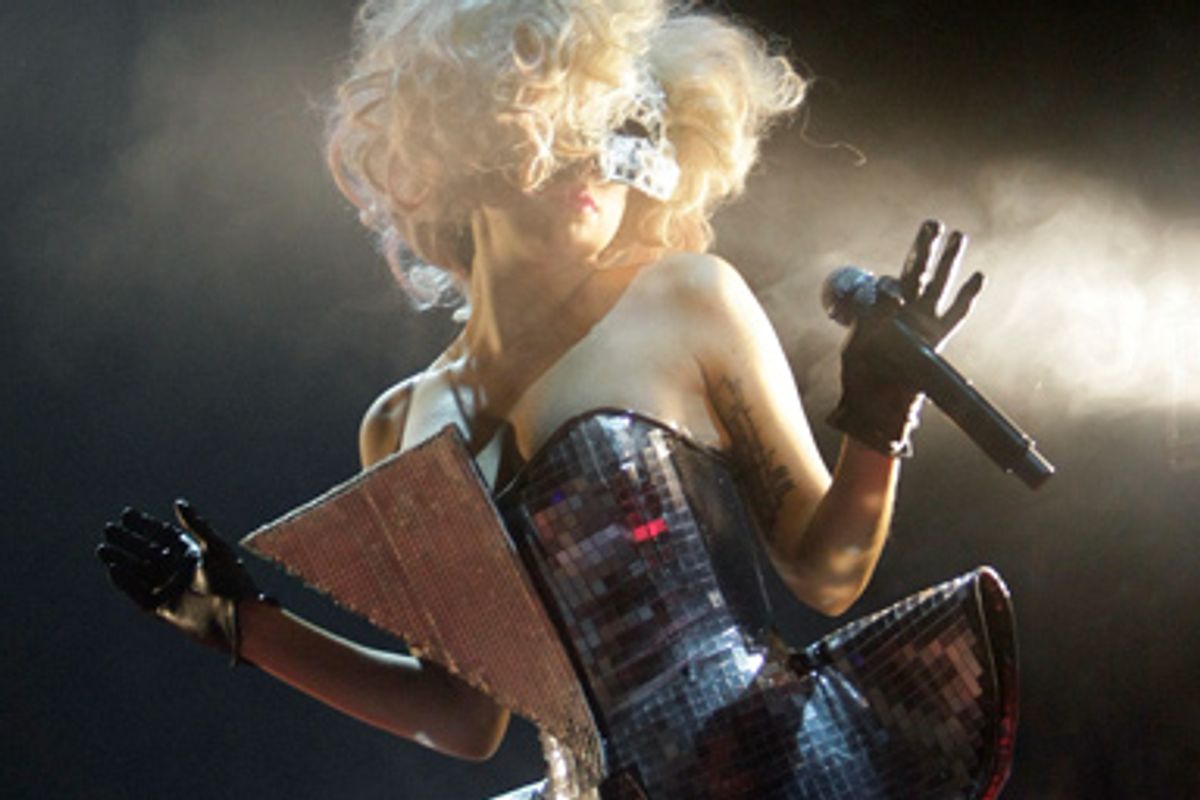 A female celebrity, a hiked-up skirt, a flash of her doll parts – they’re a modern classic paparazzi cocktail. But when Lady Gaga showed off her stuff while dismounting a motorcycle onstage at the Glastonbury Festival earlier this month, it wasn’t her bikini wax that caused jaws to drop. It was the fact she seemed to be the girl with something extra – like, maybe a penis. While the view from below was brief, grainy and inconclusive, the image of her possible disco stick nonetheless has already become the Zapruder film of dick slips. The rumor got a further boost when gossip site bossip.com posted an unverified “quote” from the Lady, alleging she’s admitted ”I have both a poon and a peener. Big f*cking deal.”

The husky-voiced 23-year-old’s penchant for long blond wigs, false eyelashes, and a latex wardrobe straight out of Hedwig’s closet could certainly give any gender illusionist a run for the money. But it’s one thing to winkingly play at drag -- especially while moaning songs like “Poker Face” that flirt with girl-on-girl themes -- and another to make the fans wonder if they’re in their own version of “The Crying Game.”

In another time and place, a star would have two courses of action when faced with some pretty hardcore speculation about her junk. She could go the Jamie Lee Curtis route and maintain a career-long dignified silence on the subject, or she could issue a testy denial and get herself photographed dry humping the nearest piece of man candy just to bring home the point.

But while Gaga's manager has called the bossip.com quote ”completely ridiculous,” Gaga nevertheless is using the brouhaha as an opportunity to say a few things about men, women, sex and gender. Wearing nothing more than smeared lipstick, she appears on the cover of the September Out magazine, where she says that “I’m gay. My music is gay. My show is gay. And I love that it’s gay. And I love my gay fans and they’re all going to be coming to our show. And it’s going to remain gay.”

Gay, however, means something different in the Gaga lexicon. Earlier this year Stefani Joanne Angelina Germanotta, as she is more poly-syllabically known, told the now defunct gay magazine “HX” that “I love men, I love women and I love sex.”

Love or loathe her musical earworms or her “Barbarella”-crossed-with-“Dynasty” fashion sense, the Lady is, like David Bowie, Annie Lennox, Ru Paul, and other eyeliner-wearing androgynes, en route to becoming one of pop’s great gender benders. And as long as we live in a world where people who cross sex role boundaries are threatened, beaten, and killed, there’s something bigger than the beat about Gaga’s superstardom. She’s a long-legged girl who makes the boys want her. She’s a got a drag queen’s name and a history of hooking up with women. She’s male, female, straight, queer, transgendered -- and that’s a little revolutionary. But don’t think about it too much, she says. Just dance.