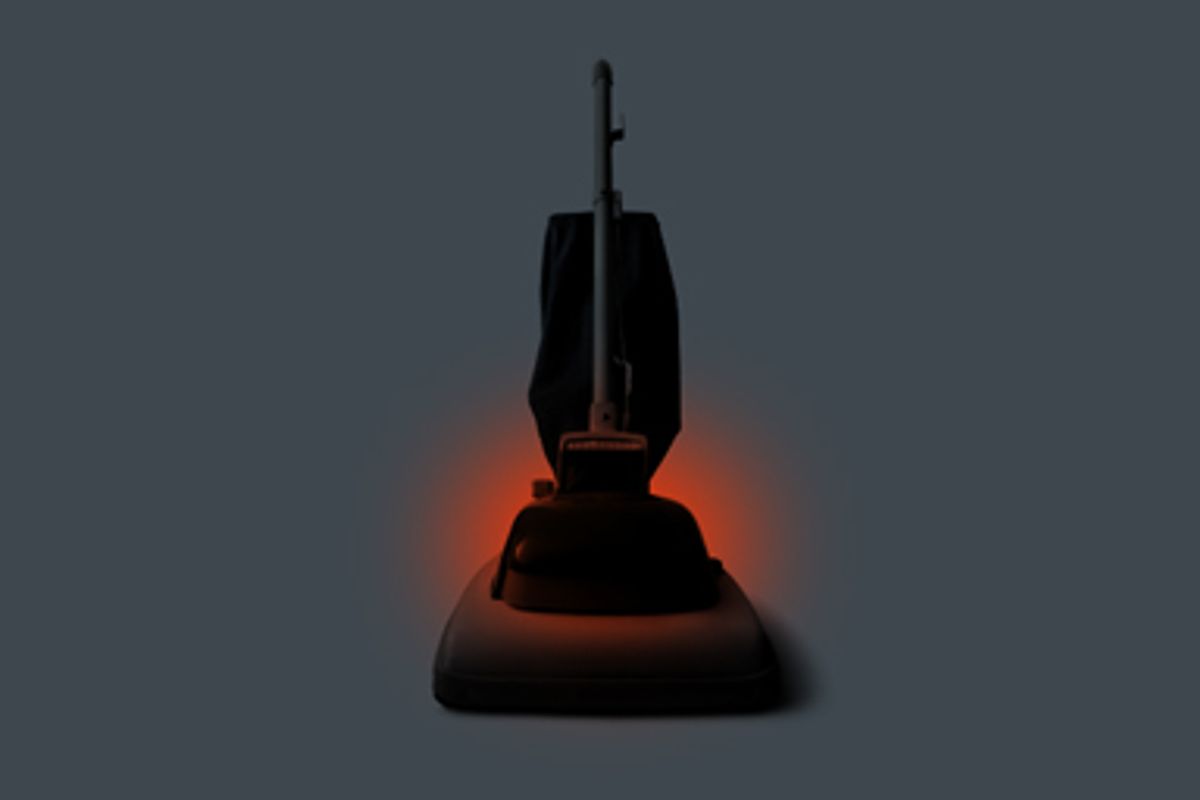 Revelations that the United States Army is developing small, hovering reconnaissance drones with a Massachusetts company that's developed robots for home vacuum-cleaning got my attention like an unexpected whiff of Mr. Clean with Febreze.

Years back, my ex-wife and I ran a house-cleaning service in Hoboken, N.J., called American Maid. We not only owned the company, we were the maids. So I've been around long enough to know that a revelation (particularly one involving the military and vacuum cleaners) can only mean one thing: There's more dirt here than meets the eye.

I dressed quickly. Plying contacts that I've cultivated over the years in the murky world of janitorial equipment and supplies, I managed to secure a meeting with Saul A. Jenks, CEO and president of JaniTech, a rival company that's also vying to secure lucrative deals with the Pentagon.

It was about midday. I ushered myself into Jenks' very modest (but, I have to say, spotless) office in some outlying suburb off I-78. He was just getting up to leave.

"Lunch?" he asked good-naturedly as he rushed past me out the door.

He picked a Hooters, thanks to its proximity to the nondescript industrial park that housed his equally nondescript suite of cramped (but, I have to reiterate, immaculate) offices.

Several pitchers of beer (and plates of jalapeno poppers) later, Jenks was looped.

(Before I relate what the man had to say, I need to point out -- in the name of full disclosure -- that Jenks was scrupulously devoid of eccentricity except for one overgrown eyebrow that curled into a kind of op-art vortex, which was impossible not to stare deeply into, and which induced an almost immediate state of hypnotic trance.)

After making repeated salacious (and increasingly slurred) suggestions to our waitress about some "very private Delta Club Platinum box" at Citi Field, he looked me in the eye.

"What do you think the suction power is of a high-end vacuum cleaner on the market today?" he asked.

"I have no idea," I responded, the image of those aspirated bowling balls coming to mind.

"Well, your typical off-the-rack high-performing cylinder vacuum might give you about 450 air watts of suction power, tops."

He leaned in across the table and whispered into my ear.

"We're developing a vacuum cleaner for the Pentagon that gives you 4.5 million air watts."

"Whoa," I said, not actually realizing the significance of such an exponential boost in suction.

"Do you have any idea of what that means?"

"It means that you could approach a cave in Tora Bora and vacuum out high-value targets. I'm talking about literally sucking the sons of bitches right out of there."

"Vacuuming terrorists?" I blurted out indiscreetly.

"Shhhhh," he cautioned, looking around the room with concern.

"Sorry," I said. "That's pretty wild, though. Sounds like something cooked up by Wile E. Coyote to catch Road Runner."

"Bags or canisters. Whole, shredded or chipped. Although you probably want something viable to interrogate."

"And that's not all we're working on," he said, winking slyly.

"What else?" I asked, pen poised over pad.

"We've got a floor-waxing machine that we've converted into a counterinsurgency weapon.

"You use this thing, say, on some mountain pass in Pakistan, out there in South Waziristan, and it makes the surface of the road so slippery, it's absolutely impassable. You can't even stand up."

"Talk about your slip-and-fall!" I said.

"And we're in talks right now with the Army about a proprietary toilet-bowl cleaner that we're developing into a sabotage device to turn lakes and rivers blue. Think about it. You're some hot-shot al-Qaida dude, and you look out into the Red Sea ... And it's friggin' blue! I mean, once you start thinking outside the box ... "

He stared off into the mid-distance.

"When it comes to fighting wars," he mused, "people get too caught up in all sorts of high-price esoteric weapons systems. That was Rumsfeld's problem. But everything you need to fight a war, you can find right in your own backyard."

He surveyed the room, taking in all the inimitable Hooters pulchritude.

"You ever read what it was like to witness a horde of mounted Mongols descending on a city back in the 15th century? Imagine a horde of Hooters girls on roller skates careening down some mountain in Afghanistan. The Taliban would freak! But, for now, we're taking an incremental approach. We're talking about small, elite units of specially trained maids sent in with high-suction vacuums and the floor waxers ..."

"The economy's tanked here, right? People are firing their cleaning ladies or cutting them back to once a month. I mean, they're lining up to enlist in the program."

"So you're training maids to ... what? Fight in Afghanistan?

He laughed, spritzed his fork with Purell, wiped it clean with his napkin, and impaled another popper.

"Well, sounds to me like business couldn't be better, huh?"

"There's one thing that concerns me a little bit. Blowback. We're militarizing domestic help, right? What happens when they're demobilized and they come back. And they've got that whole 'exhilaration of war' thing. It's not going to be so simple to re-assimilate these people into society, and invite them back into the house once a week. These are going to be elite, special-forces maids trained to kill without hesitation. People are going to have more to worry about than someone siphoning off their single malt or pilfering their Ativan and rifling through their sex toys. But that's not my problem at this point."

It was pretty scary stuff. Fascinating, though. But all that beer had made me have to pee like a racehorse.

I excused myself and walked in quick, mincing steps to the men's room. But one of those floor signs reading "Cleaning in Progress" blocked my ingress. Biological urgency trumping discretion, I skirted the sign and headed into the lavatory.

There were three guys standing in there with mops and buckets. I could clearly see the outlines of the automatic weapons, combat knives and grenades under their red janitorial overalls. I'd obviously caught them in midst of some sort of clandestine meeting.

One of them threw an obscene janitorial gesture at me. It was a gesture I happened to know well from my experience in the business -- a butt-to-mouth sweep of the hand that basically means "eat shit."

But you know something? Even though my bladder was full, my heart filled with pride. And all I could think was -- thank God they're working for our side.

Mark Leyner is a novelist and a screenwriter. He just completed a new screenplay entitled "Hurricane Jerry." He's also working on a novel in the form of a new mythology. He lives in Hoboken, New Jersey with his wife and daughter.