Not all Mousavi backers are secular. Many, like my friend Omid, are devout Muslims who no longer trust the regime 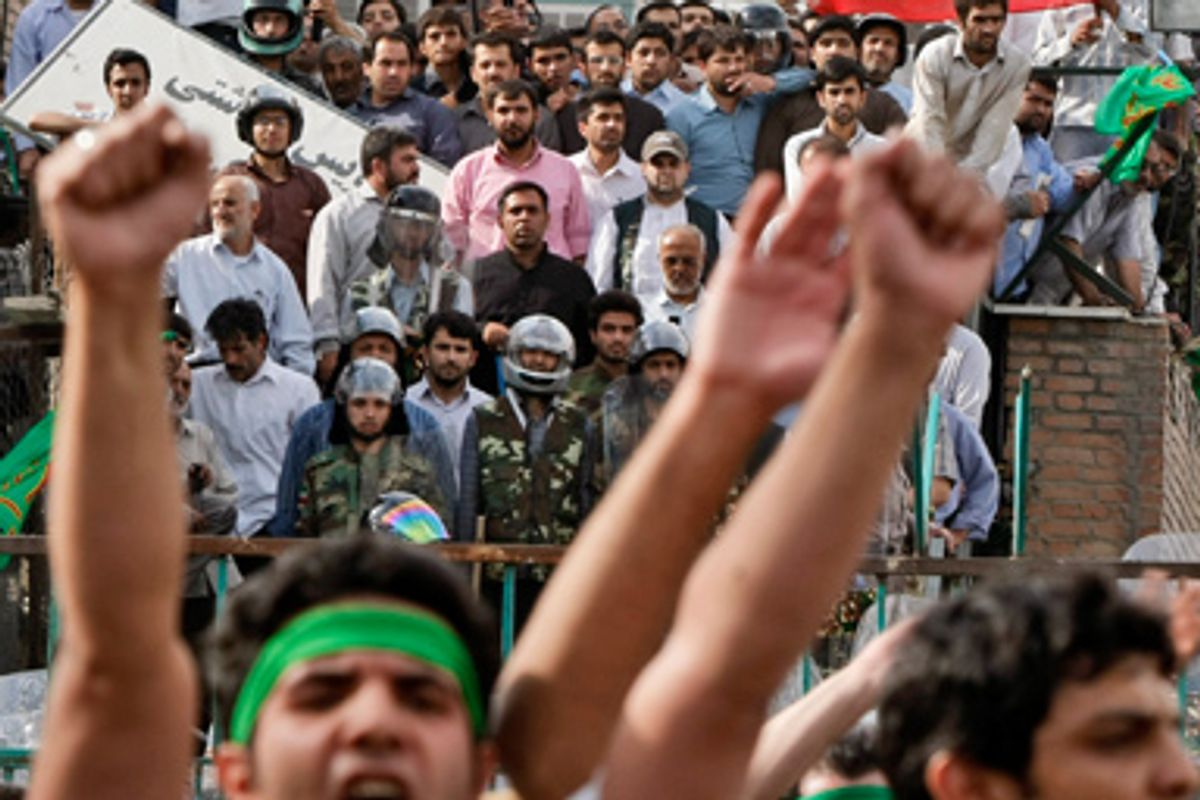 Supporters of leading opposition presidential candidate Mir Hossein Mousavi taunt members of the pro-government Basiji militia, seen in background, as the demonstration passes one of their bases, as hundreds of thousands of Mousavi supporters, who claim there was voting fraud in Friday's election, turn out to protest the result of the election at a mass rally in Azadi (Freedom) square in Tehran, Iran, Monday, June 15, 2009.
--

The framed portrait of the late Imam Khomeini loomed over us in the school's office. The principal, a disabled Basij veteran of the Iran-Iraq war and campaign organizer for presidential candidate Mir Hossein Mousavi, was visibly shaken. "I thought that when the Imam died there could be nothing worse. But what has happened these past few days ..." A week after the disputed Iranian presidential election, many of Omid's friends and fellow campaign workers had already been arrested or brought in for questioning, men he had served with at the front lines during the war a quarter century earlier. They had worked together to bring in the vote for Mousavi, a campaign seen by them as nothing less than as a defense of the Revolution, a chance to prevent Khomeini's legacy from being lost forever. Now, with the vote over and almost certainly stolen, and facing the possibility of arrest, Omid had lost hope. He no longer felt safe in the country he had once defended as a teenager. "Bad berim. Bayad az Iran berim." 'We have to leave Iran."

Voices such as Omid's are rarely heard in the coverage of Iran's presidential election, no doubt because they do not fit the accepted storyline coming out of Tehran. According to this narrative, promoted in part by the Western media, the opposition is comprised primarily of young, well-educated urban dwellers tired of clerical authority and committed to separating religion from politics once and for all. They are in turn opposed by a regime that draws its strength from the pious rural and urban poor, highly traditional populations opposed to rapprochement with the West and resentful of the creeping modernization of the past decade, the satellite dishes and foreign culture steadily eroding Iran's national identity. And the will of the regime is enforced on the street by basijis, the religious paramilitary volunteers who are younger versions of Omid.

Taken together, the urban sophisticates versus the religious conservatives represent for some Western commentators the full range of possibilities for the Islamic Republic. These analysts question whether the protest movement in Iran is truly popular beyond the middle- and upper-class enclaves of Tehran. As street protests against the state ebb into isolated and disjointed events, some observers are even returning to earlier claims that Mahmoud Ahmadinejad in fact won the June 12 election. Nearly two months out from the vote voices in the U.S. and Tehran are once again converging (with obviously different motivations) around the notion that the world once again did not "get" or understand the "true" Iran.

The truth is that the heart of the opposition lies with men and women like Omid. For these righteous citizens, faith was cause enough to vote for Mousavi, a man widely recognized for his piety, truthfulness and loyalty to the late Imam. These are the believers, Iranians committed to the promise of the Islamic Republic as an ethical project, a middle path of self-governance and sustainable modernity, without the material excesses and secularism found in Europe and the U.S., China and India. Highly religious and devoted to the memory of Khomeini, they voted in large numbers for Mousavi in order to regain control of their vision of Islam and postrevolutionary citizenship, now distorted by the likes of Ahmadinejad.

In the months and weeks preceding and following the elections I had the opportunity to interview many such voters. Most were former basijis, men like Omid who while still in high school had volunteered in the 1980s to fight against Saddam Hussein's attacking armies. They now serve as principals and teachers in several of Tehran's best private Islamic schools, institutions renowned for producing reverent graduates committed to their faith and to science. Honored war veterans and respected teachers, these individuals stand at the intersection of Iran's past and its future. It is a future that many of them for the first time in their lives are calling into question.

In our conversations they emphasized that they saw this election and its aftermath as a struggle for authenticity, for the right to define what constitutes a Good Muslim. They felt under assault by an administration and leadership unwilling to separate petty politics from what they considered to be the sublime message of the Prophet and the Imam. As educators, the behavior of the authorities during and after the elections had put them in a bind, above all the actions of the Supreme Leader, Ali Khamenei. It was one thing for a politician like Ahmadinejad to look into the camera and lie about inflation and unemployment, but what were they to make of Khamenei's subsequent endorsement of the president? What would they say to their students when they came back to school in the fall?

As one principal told me, he and his colleagues are trying to teach these kids to be just and to be honest. By supporting a man who clearly was neither of these, Khamenei had abdicated his responsibility. "This man can no longer be the Leader." Another principal I spoke to was less certain how to proceed. "If our fathers chanted 'Death to the Shah,'" he said, "it was because they saw the previous regime as being against Islam. But to hear my own son chant 'Death to Khamenei,' well, this is too much. I find it difficult to accept because he is protesting against a government of religion, of Islam."

Conflicts such as these had led a good number of my interview subjects to reassess whether the Islamic Republic itself was viable any more. Above all they stressed that Islam had to be preserved. If it took changing the system, so be it. Maybe only Ayatollah Khomeini was qualified to be the Supreme Leader, sociologist Max Weber's "charismatic leader" without subsequent peer. One teacher put it this way: "Perhaps this post [the faqih, or Supreme Leader], this responsibility, is like a ripe fruit. Delicious, sweet, pleasing to the eye, it eventually attracts flies."

Change is this year's theme, eagerly adopted by the crowds in Iran and the United States. Change requires that we put an end to enduring and pernicious assumptions about Iran, the notion that the religious are reflexively drawn to Ahmadinejad's brand of politics, or that there exists an "authentic" Iran, located somewhere south of Vanak Square. If we want to understand where the social movement still unfolding in Iran may be heading, we would do well to look to the unexpected places, to pay attention to individuals like Omid. The depth of Iran's opposition movement should be measured in their protests and cries and not just that of the nation's youthful apostates, those unbelievers who never accepted the notion of an Islamic republic in the first place. Omid and his peers do not march because they are secular or have an interest in making Iran more like the United States. Instead, they oppose the current government on its own terms, on behalf of Islam.