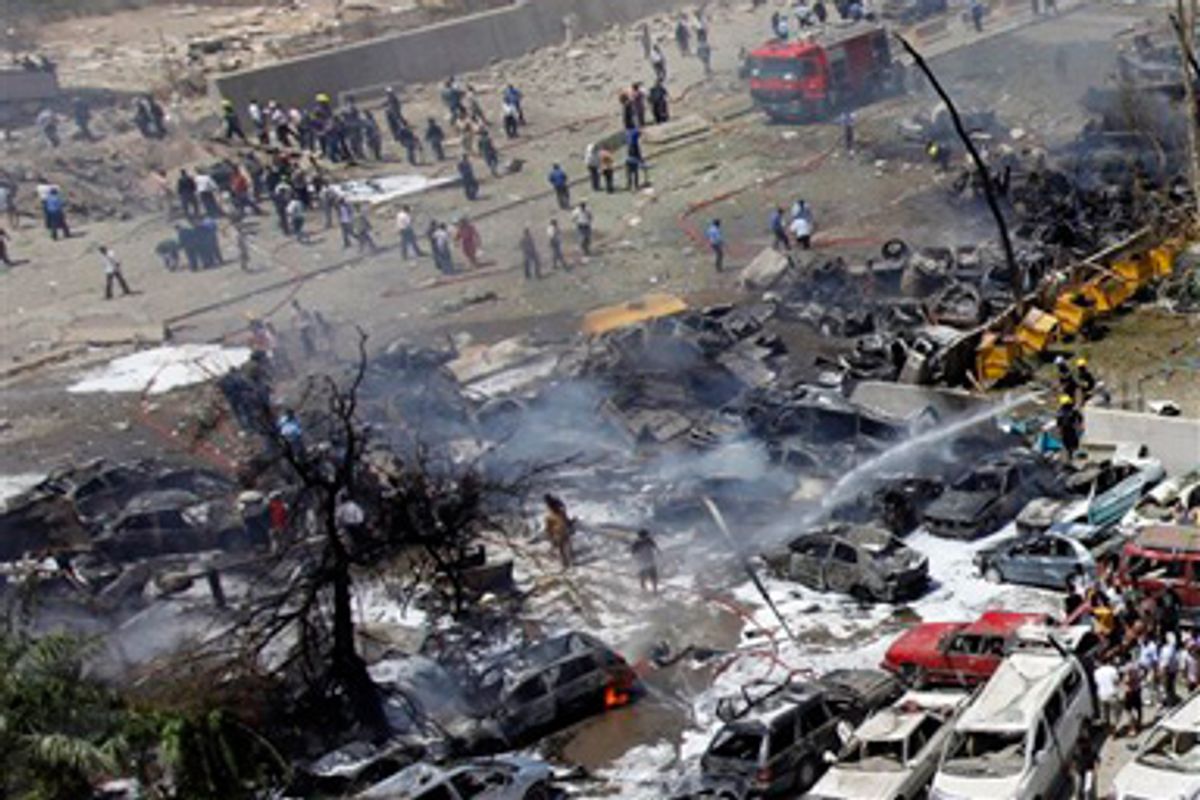 Fire fighters respond to a bombing near the Iraqi Foreign Ministry in Baghdad, Iraq, Wednesday, Aug. 19, 2009.
--

A series of coordinated truck bombings targeted Iraqi government ministries and other facilities on Wednesday morning, killing nearly 100 persons and wounding some 500. Poorly equipped and staffed emergency rooms in the capital were overwhelmed.

One of the massive explosions targeted the Foreign Ministry building, killing nearly 60 persons and breaking windows in the nearby parliament building. The offices of Baghdad Province were also hit, along with some army buildings. Others hit residential and commercial districts.

The Arabic press is reporting that a bomb went off near the al-Rashid Hotel, where government officials and the foreign press often stay. Another bombing was reported at al-Kifah Street downtown, Baghdad's traditional Wall Street financial district. A mortar landed near the United Nations headquarters.

These bombings targeted government buildings and symbols of opulence and normality -- the al-Rashid area and Kifah Street. They were intended to inform the government of Prime Minister Nuri al-Maliki that the guerrilla opposition has not been defeated, and that the prospects of his establishing a stable government that runs roughshod over other groups are low.

The Iraqi government blamed al-Qaida for the bombings, which is to say, radical Sunni Arab fundamentalists. But these attacks look more military to me, targeting as they did government ministries, and I'd be surprised if former Iraqi Baathist military officers were not involved.

The Iraqi military admitted that allowing big truck bombs to freely navigate the streets of central Baghdad was a major security breach. Iraqis had resented the blast walls and checkpoints put in by the U.S. military in 2007-2008, and the al-Maliki government had moved to dismantle them. In some instances the blast walls had protected Sunni neighborhoods from Shiite militias, but only at the cost of devastating their markets and economic life, producing 80 percent unemployment within the walls. In some ways the reduction of violence in the past year and a half has been achieved by artificial means that had no hope of continuing to be implemented in the long run.

Al-Maliki has been adamant that he will not negotiate with the remnants of the Baath Party or other Sunni Arab groups with blood on their hands. In fact, this intransigence has served as a cover for his failure to proceed with any sort of genuine political reconciliation with the Sunni Arab community. The continued violence in Iraq is a manifestation of those profound political discontents with the new political order, one dominated by the Shiites and the Kurds.