Octomom of the year 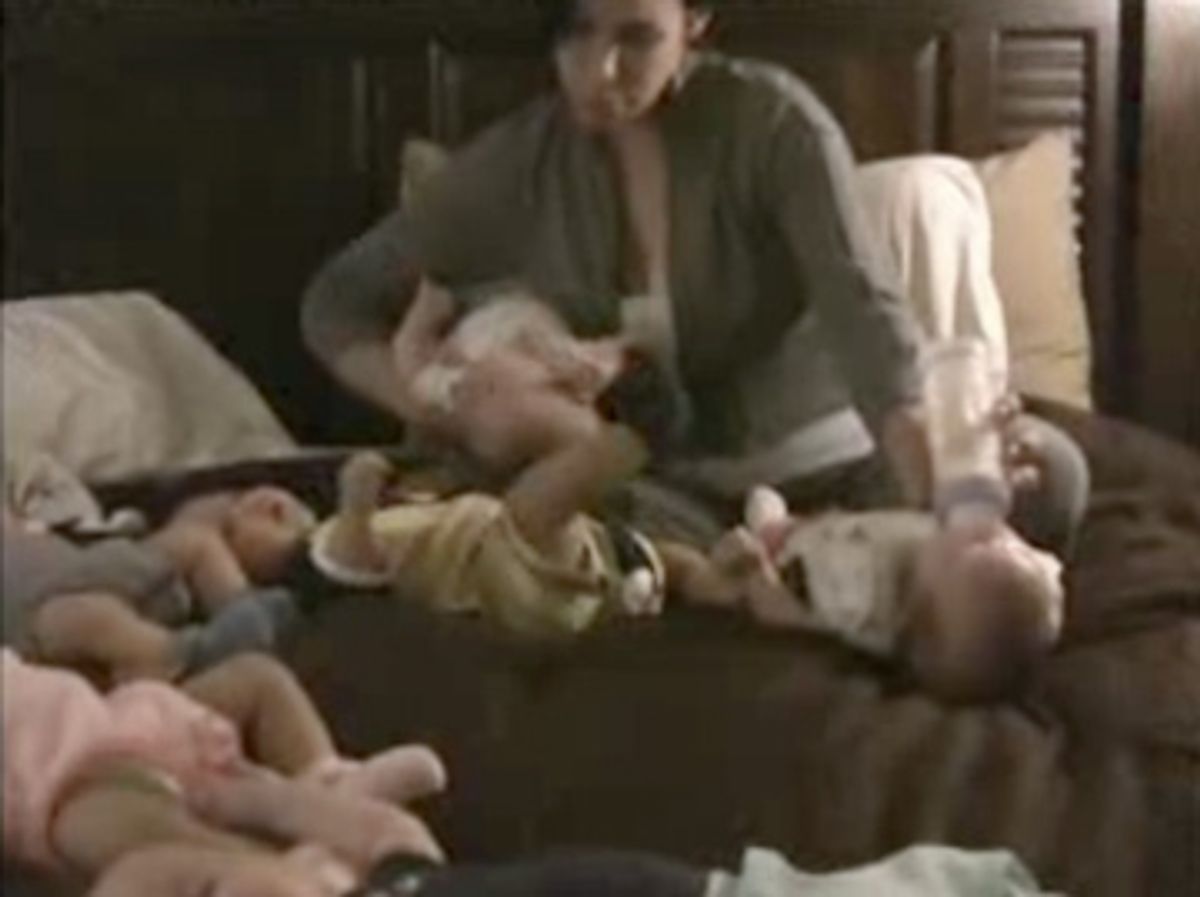 "You can't un-ring a bell." That's what Nadya Suleman, the reigning world champ of hyper-fecundity, told her mother, when called on the carpet for "frivolously procreating." Her babies are "here now," she explained, "and they're people." They're also, even Suleman knows, a heck of a story.

Suleman has been a source of nonstop horrified fascination since last fall, when the news first broke that the unwed Californian was pregnant with eight fetuses. Months later, she agreed to allow Radar Online to document her early weeks with the babies, the culmination of which appeared last night on Fox's prime-time special, "Octomom: The Incredible Unseen Footage." (Suleman also has plans to do a reality series, which will air overseas.)

But the only thing more grimly demoralizing than watching the spectacle of Nadya's chaotic life was reading, this morning, the bilious reviews not just of the special but of Suleman herself.

The Baltimore Sun called it "a hot mess," while Entertainment Weekly called Suleman "a dreadfully selfish, misguided person." Most scathing, however, was the New York Times. In this morning's review, Ginia Bellafante diagnoses Suleman as "a self-obsessed, publicity-driven lunatic" and expresses a joking hope for the children's future drunkenness. She also took pains to chastise Suleman's fertility doctor who, "let's face it, we know … was a he" (a line that the Times editors quietly edited out later this morning). Frankly it's a little hard to make fun, as Bellafante does, of Suleman's fears that her house is haunted when what passes now for integrity at the paper of record is Ginia Bellafante's intuition.

Not that the evening lacked for opportunities to second-guess Suleman's competence or decision-making skills. She admits she never gave much thought to how she would afford or care for the children, she superstitiously gets her house blessed, she touches up her makeup moments before calling 911 on the paparazzi she's trying to avoid, she vehemently denies having plastic surgery when even her mother voices her skepticism, she laughingly relates a youthful anecdote about driving around with her mother locked in the car trunk, she gets a tattoo of an angel surrounded by 14 little stars (one for each child).

Of course, the big question is why on earth anybody with six children under the age of 10 would have eight more at one go. The spectacle of it, the unnaturalness of it, the apparent irresponsibility of it are, for want of a better word, inconceivable. Even she doesn't seem to have answers. In an unguarded moment with a friend, she admits, "I screwed myself. I screwed up my life, I screwed up my kids' lives ... What was I thinking?" Suleman chalks it up to a "lonely only" childhood, and the simple conviction that she's meant to be a mom. Yet her frosty exchanges with her own mother, who berates Suleman for her "unconscionable" behavior, and her admission that the last sexual relationship she had was a decade ago -- with the unnamed sperm donor of all her children -- suggest that maybe there are a few other issues going on there.

Even more enigmatic than Suleman's motivations, however, are her means. It's never explained how Nadya was able to afford all her fertility treatments, her staff of full-time nannies, her new home or her high-tech security system.

But while the reality special didn't do much to dispel any suspicion that Nadya might be crazy in the coconut, it did present a woman who genuinely appears to love her children. Not once in the two-hour special is she shown losing her patience with her children, yelling at them, or being anything but loving and affectionate. She gamely tries to keep them out of the junk food, to snuggle with them, to diffuse their tantrums. She charges through her home picking up toys and dispensing hugs, and she strikes a big blow for attachment parenting when she shuts up her mother about letting the toddler sleep in her bed instead of his crib. If we can rush to judge her ability as a parent and her value as a human, I wonder why so few of the show's critics picked up on her less sensational attributes. Sure, her kids cry and run around and bang into stuff -- would anyone really expect 14 kids, eight of whom are infants, not to? They also look pretty healthy, well-fed, and often cheerful. While not taking from Suleman an iota of her wackadoo cred, I also can't for the life of me imagine how I'd fare with a houseful of young children, a fleet of paparazzi on my lawn and a deluge of death threats coming in every day. I sincerely doubt I'd be as optimistic as she so often appears.

It's extraordinarily easy to slap Suleman with a freak-show nickname and make jokes about her uterus. It's easier still to demonize her as the ultimate poster girl for reproductive technology run amok and bad mommyhood. Based on the reviews and ensuing comments, last night seems only to have served as further fuel for the octo-animosity. Nadya Suleman is the single mother of 14 children, and that is a bell that can't be un-rung. Skimming through a pile of tabloids with her face on them, she dismisses the public vitriol as something that "feels safe, because then you don't have to deal with yourself." Only her children will ever be able to truly judge Suleman's performance as a mother. But as an observer of human behavior and psychological projection, I'd say she does a hell of a better job than a whole lot of her critics.