"Post-Grad" gets flunking grades, but here are five movies that understand the weirdness of life after college 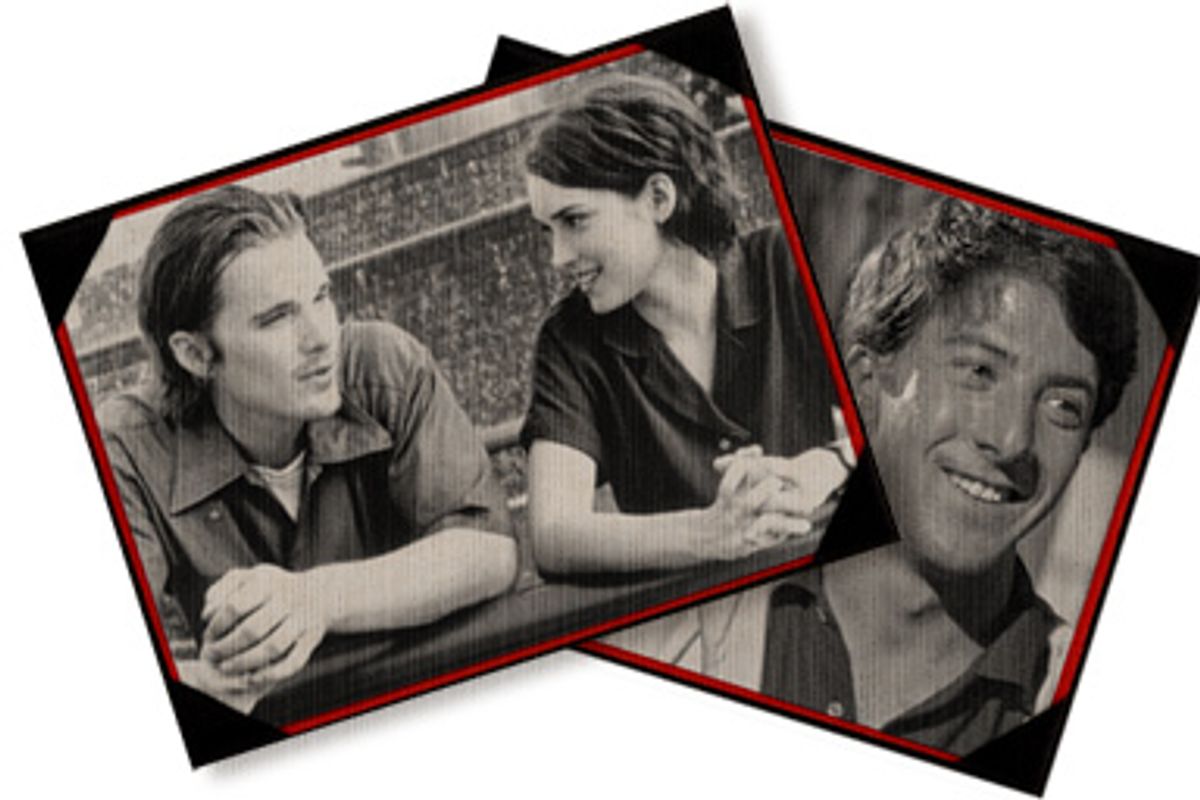 Stills from "Reality Bites" and "The Graduate"
--

High school and college -- and their attendant high jinks, betrayals and debauchery -- have been fertile ground for filmmakers, from Buster Keaton's 1927 "College" to the toga-wearing partiers of "Animal House," the suburban jocks and geeks of John Hughes' '80s canon and the dessert-humping dudes of "American Pie." But what about that delicate, dangling time after high school and college, when kids are caught in that weird space between keggers and office parties?

As a recession-cursed class of 2009 college graduate, I hoped to turn to the wisdom of the movies to figure out where my life was headed, the same way I looked to rising freshman Mitch Kramer in "Dazed and Confused" when entering high school or the scandalous "Rules of Attraction" before traveling abroad. Now in my early 20s, I'm resigned to a blank stare when asked about my future plans. So you can imagine my disappointment when a movie custom-made for my age group -- "Post Grad," about the travails of a career-less college graduate -- turned out to be so flimsy.

Helmed by "Shrek" co-director Vicky Jenson, "Post-Grad" finds Alexis Bledel sinking into the quicksand of typecasting, playing nearly the same role she perfected during seven seasons as the ambitious Rory on "Gilmore Girls." Only this time, Rory is Ryden, a slightly less quick-witted overachiever whose dream job in publishing is foiled by a cartoon of a nemesis, the husky-voiced valedictorian Jessica Bard, who swoops in and ruins everything, leaving Ryden unemployed. Living my nightmare, Ryden is forced to move back home with her kooky family and work temporary jobs as a luggage salesperson and a production assistant, nearly succumbing to a mediocrity matched only by the film's stale jokes and forgettable soundtrack. The movie's one nearly relevant moment comes when Ryden's father, played by Michael Keaton, believes he has boiled down his daughter's future success to one word: "Buckles," he says.

This, of course, is a reference to one of the all-too-rare movies that does nail the post-graduate experience. (See #1, below.) And the line serves as a reminder that while "Post-Grad" is ultimately a trite fantasy, there are a few films that do manage to capture the frustration and fear of an under-examined, uncertain age.

After finishing at Oberlin, James Brennan is looking forward to traveling in Europe and, uh, losing his virginity. But after a financial shake-up, his square parents inform him that not only will he be living at home before he moves to New York City for graduate school, but he'll also have to get a job. The coddled James has no work experience but lands a gig at a budget amusement park populated by misfits and, more intriguingly, a couple beautiful girls, including the brooding Em ("Twilight"'s Kristen Stewart). Directed by "Superbad"'s Greg Mottola, the movie is relatively subdued and comically uneven (with broad performances from "SNL" vets Bill Hader and Kristen Wiig as the amusement park owners), but "Adventureland" works in spite of itself, thanks largely to a sympathetic performance from Jesse Eisenberg, who does the Michael Cera "earnest and awkward" shtick arguably better than the boy himself. Oh, and the film features a lot of Lou Reed.

"It's our time at the edge," Rob Lowe's character Billy Hicks assures Demi Moore's Jules in Joel Schumacher's 1985 time capsule. Sure, "St. Elmo's Fire" might be the cheesiest of this coming-of-age bunch. It arrived at the peak of the brat pack's reign, and this pampered Georgetown crew will surely be OK, as long as they don't choke on their silver spoons. But the tangled relationships of the movie's ensemble cast still manage to reveal the peculiar challenges of entitled kids stumbling their way into adulthood. Rather than skewer the loathsome yuppies, Schumacher humanizes them. Clinging to the glory days, shattered couples argue over their record collection while the old "friends forever" myth gets punctured, along with their dreams of the future.

"Worst-case scenario for after graduation?" four friends wonder at their commencement party. Ding -- the painfully accurate stasis depicted in "Kicking and Screaming." Noah Baumbach's 1995 indie about university-level arrested development is sharp and conversational, if a tad depressing. Hilarious resolutions to read "all the great short novels" and crises about unpaid student loans are so accurate as to be cringe-inducing, and the four protagonists -- Skippy, Otis, Max and Grover -- demonstrate that sarcasm and irony may be the best antidotes for indecision and apprehension. The film captures that dangerous moment when floundering can pivot from a funny phase to a state of being. As Max puts it: "What I used to able to pass off as a bad summer could now potentially turn into a bad life."

Ben Stiller's ode to Gen X may seem dated now, with its homage to "The Real World," its goatees and grunge rock. But amidst the MTV and AIDS tests, the essence of "Reality Bites" still holds true for a demographic that would rather subsist on stolen candy bars and cheap pizza than become their parents -- stiff and conventional -- and who rail against the notion that the minute you walk across the stage you have to trade your worn jeans for pleated slacks. Winona Ryder and Ethan Hawke still seem effortlessly cool, and their fear of selling out reverberates with idealists of all eras, regardless of their musical idols or facial hair.

Benjamin Braddock's dead eyes say more than his monotone mumble. In Mike Nichols' 1967 American classic, Dustin Hoffman plays the deeply lost college grad, shuffling through every scene in an emotional void as life happens to him. The caged, cosmopolitan Mrs. Robinson seduces him, but he falls for her wholesome daughter Elaine, finally breaking his stupor to kidnap her from her loveless nuptials. No one wants to see himself or herself in the stodgy Benjamin or slightly vacant Elaine, but Benjamin's soulless acceptance of a useless gift (who needs a scuba suit?) and the blankness with which he greets career advice encapsulate the anti-climax of college graduation. Remembered more for its cross-generational affair than its emotional honesty, "The Graduate" is still the blueprint for each and every one of the aforementioned movies (and scads more). For Benjamin, guidance like "plastics" goes in one ear and out the other; the only advice he really needs, to paraphrase Simon & Garfunkel, is the help to learn how to help himself.