Elite right-wing foes of healthcare reform are telling lies. The folks listening to them are mostly just scared 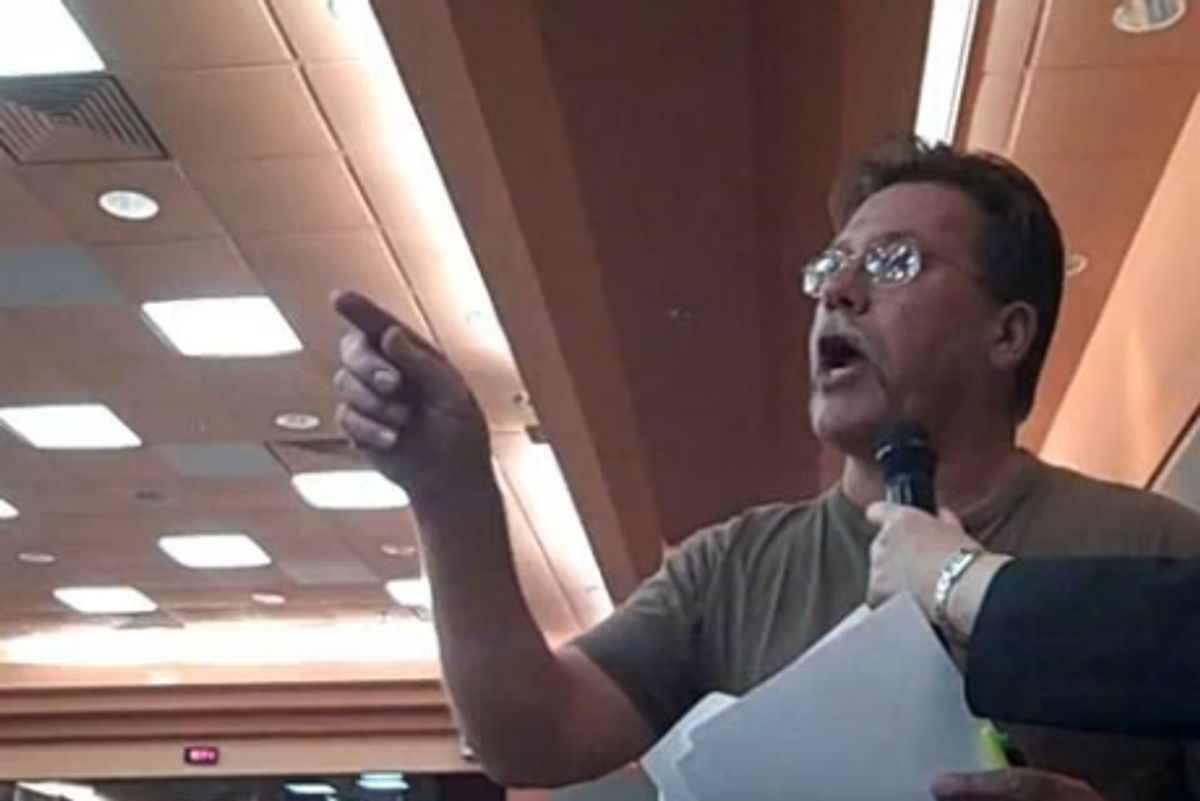 As a beginning rider, I once asked a racehorse trainer for advice about my quarter horse, Rusty. When he'd freak out over, say, a wind-blown plastic bag, was he really afraid? The trainer said the horse was simply testing me and needed very firm handling.

Soon afterward, I stopped to talk with a friend who was holding a fishing rod. Rusty started stamping, blowing, rolling his eyes and throwing his head around. I made it a contest of wills, jerking hard on the bit to make him stand still.

Then my friend dropped the fishing rod.

Rusty bolted, hit warp speed in about three jumps and stampeded us through a magnolia tree. It took me a quarter mile to bring him back under control. I was lucky a black eye was all I got out of it. Another trainer gave me better advice: Horses aren't smart enough to lie. If they act scared, they're scared. And when they're scared, they're very dangerous.

True, fear is partly a confidence issue. A horse that trusts its rider is far less skittish. Over time, we learned to take care of each other. But nothing could keep Rusty calm around anything resembling a whip; I'm sure he had his reasons.

Fear is, of course, largely a confidence issue among human beings, too. Anybody who's watched flash mobs shouting down Senate and House members over the Obama administration's health-insurance reforms ought to see that. For every dogmatic tough guy who's channeling some talk-radio blowhard, there are many citizens who give every outward indication of being scared witless.

Video of a town hall meeting with Democratic House members at Arkansas Children's Hospital showed protesters trembling with emotion. Writing in the Washington Post, historian Rick Perlstein ("Nixonland") noticed the same thing: "The quiver on the lips of the man pushing the wheelchair, the crazed risk of carrying a pistol around a president – too heartfelt to be an act."

Stage managed? Absolutely. Somebody like Betsy McCaughey doesn't invent a lie as brazen as the so-called death panels out of nowhere. She's a professional; a paid propagandist for the right-wing Hudson Institute. Back in 1993, her article "No Exit" in the allegedly liberal (but incompetently edited) New Republic magazine helped sink President Bill Clinton's healthcare initiative.

Then McCaughey claimed the Clinton bill made it a crime to buy supplemental insurance or pay your doctor out of pocket. The bill itself said, "Nothing in this act shall be construed as prohibiting ... an individual from purchasing health-care services."

But McCaughey's a poised and superficially attractive woman who performs capably on television. So why wouldn't low-information voters get taken in all over again? Particularly after her "death panel" falsehoods got amplified by figures like Rush Limbaugh, Sarah Palin and the supposedly "moderate" Iowa Sen. Chuck Grassley.

Perlstein: "If you don't understand that any moment of genuine political change always produces both [mad lies and heartfelt fear], you can't understand America, where the crazy tree blooms in every moment of liberal ascendancy, and where elites exploit the crazy for their own narrow interests."

And yet the Obama White House got caught napping as the paranoid train left the station once again. Presidential aides told reporters that the barrage of falsehoods and insane comparisons to Nazi Germany "had caught them off guard and forced them to begin an August counteroffensive."

So where were these geniuses back when Clinton was being called a drug smuggler and mass murderer? When militiamen spotted U.N. "black helicopters" over Western skies? When thousands hoarded canned food and bottled water in advance of the imaginary Y2K catastrophe?

Conservatives determined to prevent Obama from succeeding understand that their best chance is to frighten poorly informed voters historically susceptible to conspiracy theories – particularly in rural states far from centers of power.

Too often, the Democratic response goes something like this: "The claims can be debunked a million times and it would make not one bit of difference to them. They hate President Obama, most of them are racists, and they are out to destroy him. They are irrational (barely) human beings with no conscience."

Persuasive, don't you think? OK, so I took that from a fellow on my Facebook page. It's sadly typical. For a generation now, the well-organized and lavishly funded right-wing noise machine has dominated American political debate with poisonous nonsense like McCaughey's, with little effective pushback.

To the extent Democrats resist, it's mainly on Web sites like the invaluable Media Matters for America. What's needed, however, is a strong counter-narrative informing voters that they're being had: conned, tricked and manipulated by, yes, New York, Washington and Hollywood "media elites" who lie for money. Vulgar? You bet. It's called "populism," and it once dominated the very states where talk-radio bombast now holds sway.