Tom DeLay and the Woodstock Nation

What if the heavy-footed "Dancing With the Stars" contestant's worldview hadn't won out over peace and love? 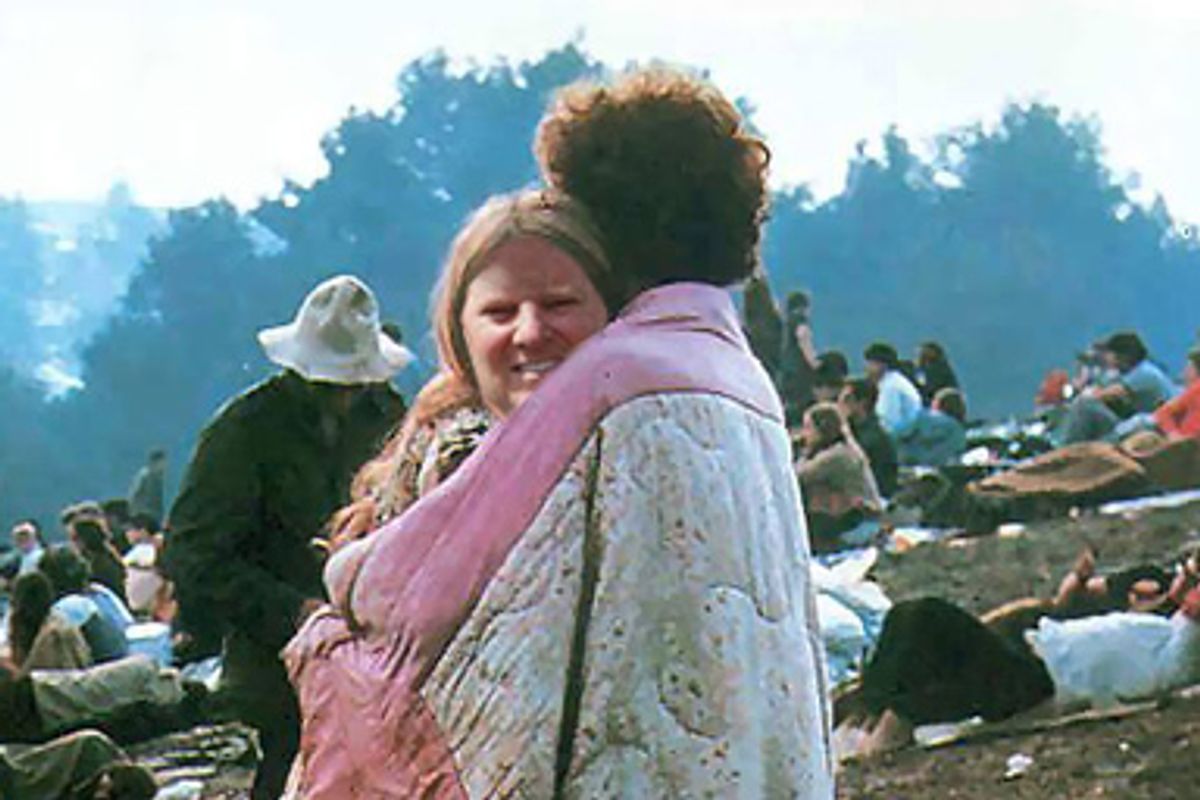 Tom Delay and the Woodstock Nation
--

A sorry state of affairs. If it weren't for all the 40th-anniversary celebrations of Woodstock, the primary cultural contribution of the month would be the announcement that former House Majority Leader Tom DeLay of Texas will be a contestant in the next round of "Dancing With the Stars."

Still, better to see DeLay trotting the boards of ABC's hit "reality" show than back marauding the halls of Congress -- or roaming faraway Saipan with now imprisoned lobbyist Jack Abramoff, praising the U.S. possession's sweatshops as "a perfect petri dish of capitalism." ("It's like my Galapagos Island," DeLay said enthusiastically.)

When he makes his debut on "Dancing With the Stars," you have to wonder if Tom will specialize in that favorite Lone Star dance, the Cotton-Eyed Joe, or more appropriately, some variation of the sidestep, immortalized in Broadway's "Best Little Whorehouse in Texas."

The corrupt governor in the show sings, "Ooh, I love to dance a little sidestep. Now they see me, now they don't. I've come and gone and, ooh I love to sweep around the wide step, cut a little swath, and lead the people on."

No doubt there will be a lifting groundswell of GOP voting that will keep DeLay light on his feet through at least the first rounds of the competition. But as far as leading people on, the ex-congressman would do well to remember what happened the last time he tried to tamper with the scorekeeping on "Dancing With the Stars."

You see, this is not the Hammer's first time at the rodeo. Three years ago, several weeks after his resignation from Congress, he sent a letter to his fan base urging them to vote for country singer Sara Evans, a "Dancing With the Stars" contestant.

"Sara Evans has been a strong supporter of the Republican Party and represents good American values in the media," DeLay wrote. "From singing at the 2004 Republican Convention to appearing with candidates in the last several election cycles, we have always been able to count on Sara for her support of the things we all believe in ... One of her opponents on the show is ultra-liberal talk show host Jerry Springer. We need to send a message to Hollywood and the media that smut has no place on television by supporting good people like Sara Evans."

Jerry Springer wound up outlasting Evans, who dropped out of "Dancing With the Stars" in the midst of a messy divorce during which she accused her husband of serial adultery. He made similar charges against her.

So it goes when bad things happen to good people.

Now if DeLay equated the comparatively harmless Springer with smut on TV, goodness knows what he would have made of Woodstock, the peace-love-music free-for-all celebration that in 1969 churned upstate New York dairy farmer Max Yasgur's pastures into mud.

DeLay was 22 back then, perhaps just a hair past prime for the Woodstock generation, but still in his pre-probity days. He might have enjoyed himself (remember, while in the Texas state Legislature his nickname was "Hot Tub Tom").

At the time, he was working on his final credits toward a bachelor's degree from the University of Houston. He majored in biology, which before he went into politics led to a career not in evolutionary science but in insect extermination.

Me, during the summer of Woodstock I was getting ready to go away for my freshman year of college. I saw one of the first ads for the festival in the Sunday edition of the New York Times and enlisted one of my high school English teachers and her husband to go with me -- they even had the requisite Volkswagen microbus. And the concert site was only a four-hour drive away, tops.

Alas, my plan fell through for that most rudimentary of reasons: My mother said no.

Several months later, at the end of my freshman year, some friends and I hitchhiked to a midnight showing of Michael Wadleigh's extraordinary Woodstock documentary. Hard to imagine that four decades later anyone would have the creative courage -- or chutzpah -- to try to recapture the experience.

But two sets of filmmakers have done just that, and the results are terrific. "Taking Woodstock," a feature film directed by Ang Lee and written and produced by my friend James Schamus, is a funny, touching look at the festival from the periphery. The performances are on pitch, and the movie captures the period and the event perfectly, without once slipping into caricature or retrospective smugness -- not a whiff of contemporary filmmakers betraying their subject matter with a "weren't they adorable and feckless back then" attitude. (In fact, Schamus told me the only thing people who were there in 1969 think "Taking Woodstock" lacks in the way of atmosphere is the stink created by acres of muck and half a million people.)

So, too, with "Woodstock: Now and Then," directed by the great documentary filmmaker Barbara Kopple. Using footage from the original Wadleigh documentary, combined with a wealth of other archival material and new interviews with many of the participants, Kopple tells the story of the concert from its inception through the bitter financial wrangling that tore its promoters apart from the moment the music was over.

In his New York Times review, critic Mike Hale wrote, "In one way her film is probably truer to the actual experience of the average Woodstock attendee than Mr. Wadleigh's was. She focuses less on the music, which for some portion of the half-million people in attendance was merely a rumor."

There is a fearful, ironic symmetry in the Times' praise of Kopple's documentary, for one of the most interesting points of her film is how that paper, as well as other publications at the time, initially tried to shape their coverage to match a prejudiced preconception. It was a "Nightmare in the Catskills," the Times editorialized. "What kind of culture is it that can produce so colossal a mess? ... Surely the parents, the teachers and indeed all the adults who helped create the society against which these young people are so feverishly rebelling must bear a share of the responsibility for this outrageous episode."

New York Times reporter Barnard Collier, who was covering the actual concert, pushed back. Interviewed in Kopple's film, he recalled, "When the stuff started getting back to New York, the editors there said, 'This is not what we want. We want a story about what a mess this is.' They wanted me to write a story that said Woodstock was a catastrophe about to happen. I said I wouldn't write it. They said, 'You gotta write it.' I said, 'I refuse to write it, unless it gets in [my] way.' I said, 'And you gotta read it to me before it goes in, so that I know somebody hasn't penciled it' -- you know, taken it apart.

In this time of dying newspapers and the domination of television news by cable networks featuring bombastic opinion and little else, remembering a time when a reporter could persuade an editor to do the right thing makes one wistful. Wistful as well to reflect on a Woodstock Nation that never really materialized, its moment of rhythm and harmony trumped by the heavy-footed dance stylings of men like Tom DeLay.

("Taking Woodstock" opens at theaters in New York and Los Angeles Aug. 26 and nationwide on Aug. 28. "Woodstock: Now and Then" has already premiered on the VH1 and the History Channel cable networks. Keep your eyes open for repeats.)