Catholic leaders lobby against abortion and euthanasia, but where's their activism on that other "life" issue? 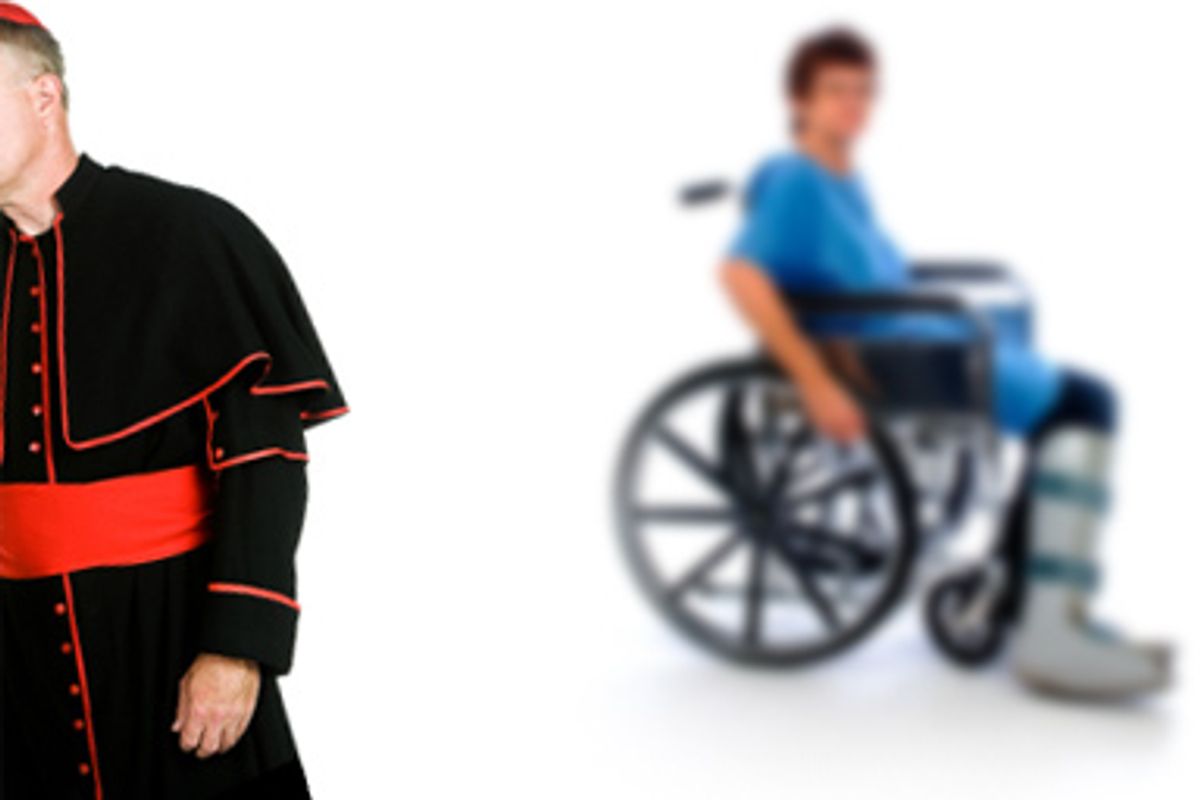 We Catholics believe in two kinds of sin -- sins of commission and sins of omission. On healthcare, church leadership is committing the sin of omission. The U.S. Conference of Catholic Bishops is just not working hard enough on behalf of the most important and desperately needed healthcare reform -- the public option.

For decades the bishops have advocated for universal healthcare -- in fact, for a single-payer system with a strong emphasis on covering the uninsured, the poor and immigrants. The best shot at reform is now. But the bishops are squandering every ounce of moral capital they have, not on the public option, but on ensuring that in any reform bill not one penny of federal funds is used for abortion.

This strategy has put them in the extremist camp among those opposed to abortion. Moderate evangelicals and antiabortion Catholics bit the bullet on abortion four years ago and decided that other issues like ending wars, reducing global warming, and fighting poverty meant it was time to move on from attempting to outlaw abortion. While one can quibble with their strategy, working to prevent the need for abortion was a step forward from working to make it illegal.

On healthcare reform, religious groups opposed to and supportive of legal abortion have adopted an awkward but workable frame for containing the abortion issue. All agree to support the "status quo" and to not use healthcare to advance their abortion agendas; and they agree to disagree about what the status quo is and move on. Not the bishops; they are the only religious group that is holding support for healthcare reform hostage to a complete ban on any form of federal funds being spent on abortion coverage.

The bishops are no strangers to lobbying. They maintain a strong lobbyist staff in Washington, D.C., and have lobbying offices in 43 states. They have contributed funds and joined coalitions on the wrong side of many "life" issues while penny-pinching on stuff that really could save tens of thousands of lives. They fought Oregon's assisted suicide law in 1994 and opposed assisted suicide everywhere else such measures have been introduced. On abortion they have spent untold sums of money, including paying the public-relations firm of Hill & Knowlton up to $5 million to revamp the church's antiabortion message in the mid-'80s. They've weighed in on preventing embryonic stem cell research. Though it's not a "life" issue, the bishops also spent considerable sums in 2004 on various state ballot initiatives on marriage equality, including $500,000 to support a gay-marriage ban in Michigan and $200,000 to support a gay-marriage ban in California. But where's the money and work for healthcare reform?

It wasn't until June that the bishops even bothered to set up a special healthcare-reform section on their Web site. The bishops' posts on the section get more strident on abortion by the day and less focused on universal access. At present, issues like covering the uninsured are in small print on the Web site, and in the bishops' letters to Congress and action alerts. It's time for the bishops to put aside their obsession with abortion and start working to mobilize the 67,500,000 registered Catholics, of whom 35 percent are likely to be in church on Sunday, into a lobbying force for healthcare reform.

While the bishops sit on their hands, heavy lifting is being done by the Catholic Health Association. The CHA is consistently opposed to abortion and heavily invested in protecting the nation's 642 Catholic hospitals from being required to provide condoms to prevent HIV transmission and emergency contraception for women who've been raped. Yet in the past five years the CHA has also worked diligently with those same hospitals to provide more charity care to patients and handle labor disputes equitably. Member hospitals of CHA as well as those in the American Hospital Association and other hospital groups agreed on July 8 to reduce the Medicaid and Medicare reimbursements they receive by $155 million over the next 10 years to help achieve cost savings in healthcare reform. CHA made no demand that giving up that funding was contingent on keeping abortion out of the package. The member hospitals of CHA are for the most part sponsored by women's religious orders who have a real commitment to serving the poor, as opposed to the bishops, who over the years have become more and more concerned with orthodoxy on sexual and reproductive health issues instead.

One only needs to look at the Web sites of the state lobbying offices of the bishops to see how little they care about healthcare. The New York State Web site homepage makes no mention of national healthcare reform. Woefully out of date, it contains June 2009 action alerts -- opposing a bill that would extend the statute of limitations on clergy sex-abuse charges; another opposing a "same-sex marriage" bill and another criticizing a state policy that will permit women who donate eggs for stem cell research to be compensated for their time and "inconvenience." Where is the commitment to those in need?

With Obama's election, the power shift in religion is away from the religious right and toward more progressive perspectives on faith and public policy. Even evangelicals are moving toward the left on gay rights and reproductive health -- not far enough, but no longer absolutist on the issues. And Presbyterian, United Church of Christ, Unitarian and other pro-choice denominations are working side by side with progressive evangelicals to get the best healthcare package for low-income people we can. Notably absent from these efforts is the increasingly isolated U.S. Conference of Catholic Bishops

This past week saw Obama step up to the plate to defend healthcare reform on moral grounds with remarks made to the Faith for Health coalition, which is engaged in a 40-day push to get comprehensive healthcare reform passed. Members include heavy hitters such as the National Baptist Convention, the United Methodist Church, the Episcopal Church, the Islamic Society of America and the Religious Action Center of Reform Judaism as well as smaller groups like Sojourners, PICO and Faith in Public Life. These are organizations most Americans have never heard of. They've heard of the Catholic church, but the bishops are nowhere to be found.