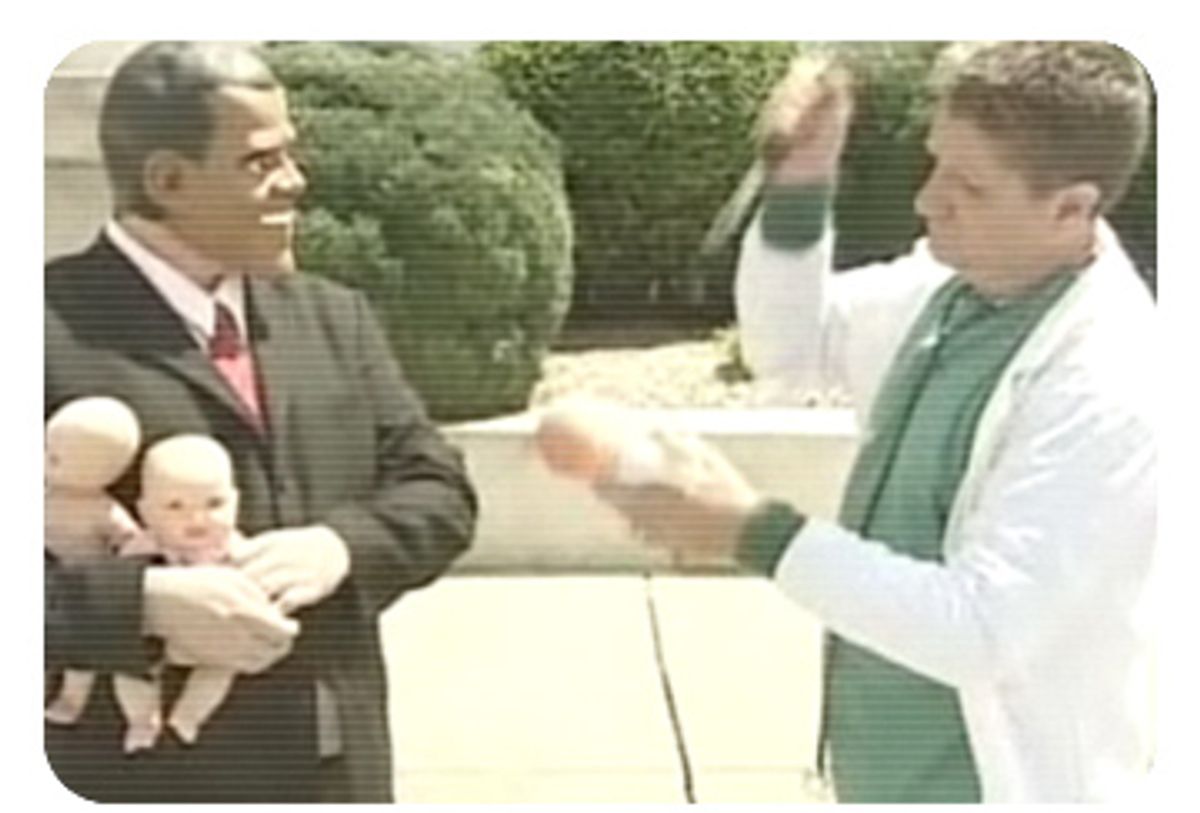 WASHINGTON -- This summer's town halls on healthcare reform have seen protesters calling President Obama a Nazi, yelling at members of Congress, and spouting all sorts of bogus "facts" mostly gleaned from listening to Glenn Beck. So you'd think it would be tough to turn them into even more of a farce than they already are.

Then again, that's what Randall Terry is for.

The deposed founder of Operation Rescue has decided to join the healthcare reform opponents' bandwagon, apparently figuring any movement that includes devotees of Lyndon LaRouche, Birthers and other extremists is too good to pass up. So he's been organizing protests outside town halls for the last few days, zipping around Virginia, North Carolina, Tennessee and Kentucky to bring his own particular brand of crazy to the healthcare debate.

Terry, of course, last made national political news the week after an antiabortion zealot murdered Dr. George Tiller; Terry said Tiller was to blame for his own death, then invited reporters to buy him beer and chicken wings. His involvement in any right-wing cause is almost certain these days once the cause gets enough attention in the media. Earlier this spring, he was arrested at the University of Notre Dame, protesting Obama's speech there, and a few years ago, he glommed on to the sad tale of Terri Schiavo, popping up as the spokesman for her relatives who opposed taking her off life support.

So far, his healthcare protests are off to an equally classy start. In Chattanooga, Tenn., he was nearly arrested Saturday while standing outside a federal courthouse stabbing baby dolls, because he hadn't obtained the proper permits for the demonstration. In Nashville on Sunday, one of Terry's cronies put on an Obama mask and pretended to mug pedestrians walking by. "It's an angry white man in a black man's mask," Nashville resident James Davis, who saw Terry's high jinks in action, told the Tennessean's Jennifer Brooks. "They're just trying to shock people. They're trying to say, 'Barack Obama doesn't care about you, he doesn't care about your kids, because he's black.'" (Salon couldn't put it much better ourselves.) The protests also include a crowd-pleasing bit where an old lady walks up to Terry, dressed as a doctor, seeking medical advice, and instead Terry jabs her in the neck with a needle and pretends to kill her.

The point of all this was, apparently, to make sure the opposition to healthcare reform focuses on the right things -- which, Terry being Terry, boils down to abortion and euthanasia. "It is refreshing to see the rage expressed at 'town hall meetings,'" he wrote in an e-mail to supporters on Friday. "However, much of this anger is not about child-killing. It's about the cost of the bill, or rationing, or if we can keep our current plan, or about treatments for the elderly. Our goal is to keep child-killing and euthanasia in the center of this debate until any vestige of taxpayers paying for murder is gone."

Easy -- and satisfying -- as it is to mock Terry, he's hitting on themes that more mainstream opponents of Obama's reform proposals are also using; just look at the "death panel" lies that Sarah Palin helped spread on Facebook or the constant buzz about taxpayer-funded abortions that antiabortion groups are using to scare their members about the legislation. But it's possible this latest step in the town hall saga could backfire. He'll be in northern Virginia Tuesday night, outside a town hall meeting with Democratic Rep. Jim Moran and Howard Dean, which isn't likely to be the friendliest turf for this kind of stuff. Might Terry's over-the-top antics start to alienate some of the people Republicans are trying to turn against the reform measures?