Are we really so miserable?

Antidepressant use has doubled, and anxiety is at a troubling high. Blame TV, Big Pharma -- and possibly yourself 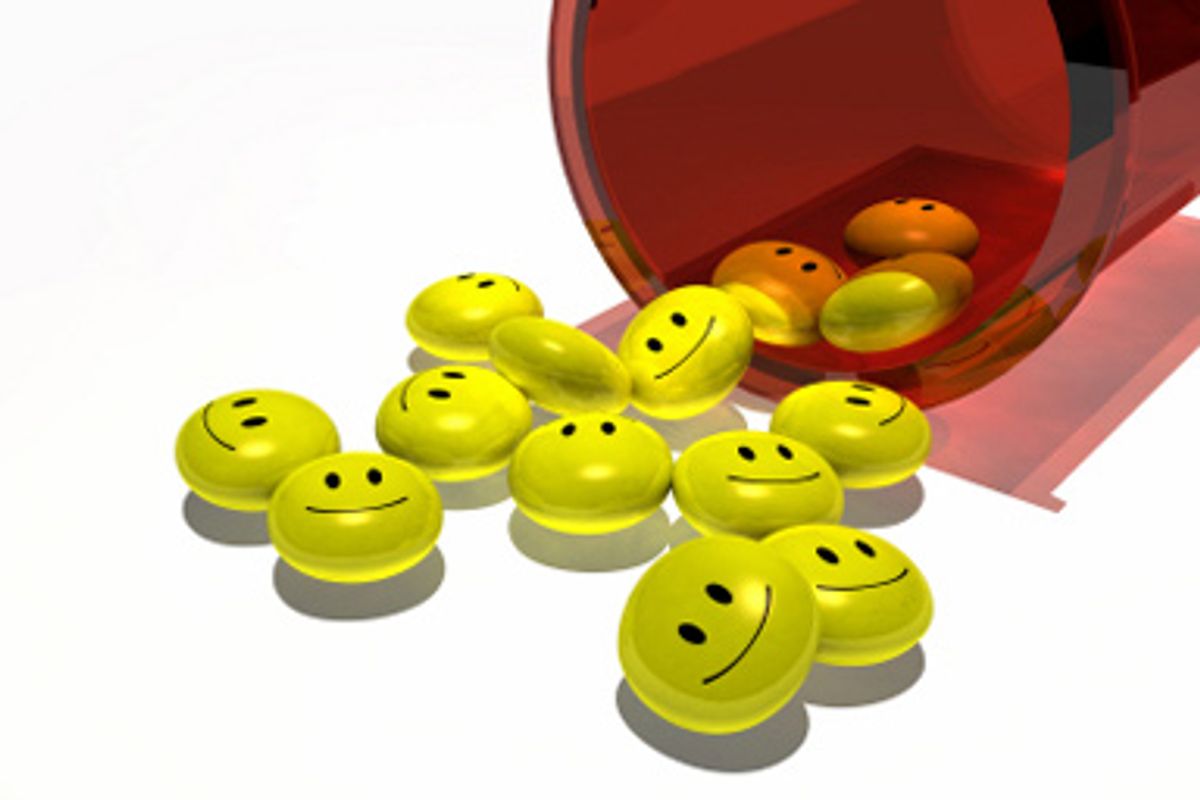 Manipulated might be a better word than miserable. If we were to pick one factor that explains the dramatically increased number of selective serotonin reuptake inhibitors (the technical name for drugs like Prozac, Paxil and Zoloft) that now run through our collective bloodstream, it would be direct-to-consumer advertising, otherwise known as television commercials for prescription drugs. An obscure rule change by the FDA in 1997 allowed Big Pharma to advertise its products on TV and bring them into our living rooms, and our daily consciousness. The pharmaceutical companies concentrated on their best-selling “blockbuster” drugs — Lipitor, Claritin, Nexium, Viagra, as well as the psychiatric drugs Prozac, Paxil and Zoloft, and more currently, Effexor and Lexapro — and soon enough these drugs became, quite literally, household names, the celebrities of pharmaceutical agents. Psychiatric drugs featured prominently in these ads because psychiatric drugs are very good sellers, among the best in the industry, for which there is a simple reason: Legitimate psychiatric illnesses are chronic (if episodic), and the legitimate sufferer needs to take the medication for a long time, if not for life.

With the resources and, yes, the resourcefulness of Big Pharma on hand, the ads were, for the most part, brilliant. They show the facile transformation from illness to health in a scant 60 seconds. Consider the ads themselves, which have become visual wallpaper for every TV viewer: A tormented person stares, alone and agonized, into some kind of abyss. Then along comes the depression drug, and the person is instantly transformed, grandchild on a knee, a golden retriever lolling at the feet. The sunny pictures and rousing music stand in sharp contrast to those bleak voiceovers rattling off disturbing side effects, but no matter — the way our minds work, we remember the soothing imagery, not the diarrhea and the flatulence.

Often it is hard to tell exactly what condition the drugs are treating. The taglines of the drugs are often vague — for drugs for depression, the slogans might speak broadly but inspirationally about change and hope and getting back to one’s true self. (Now that I think of it, these meta-messages are not unlike those of the Obama campaign.) The drugs thus appear to be defined less as mediators of specific medical conditions than as ways to enhance one’s lifestyle and quality of life. And this is good for business: It turns out that the market base of people who are interested in enhancing their lifestyle is far greater than of those who suffer from major depression and other serious and debilitating mental illnesses. In the case of Viagra and similar drugs, the number of people suffering from erectile dysfunction is far less than the number of people who want to have good sex.

And America is just about alone in the world in how we’ve embraced the commodification of pharmaceutical agents on television, the selling of them along with toothpaste and Chevrolet. Direct-to-consumer television advertising for drugs is illegal in every other country in the world, except for some strange reason, New Zealand. (Although I was contacted by a psychiatrist from New Zealand who told me that he’d never seen a drug ad on TV there, so maybe it really is just us.) It’s a very American thing, this turning of our drugs into products, and you can see its deleterious effects in the way that the illicit use of prescription drugs has risen dramatically by young people in recent years (who came of age watching these ads and don’t remember a time when they weren’t on TV), and the now not-infrequent death of celebrities who mix and match too many of these things. (Michael Jackson died of an overdose of propofol, neither advertised on TV nor recommended for home use. But reports have suggested he also indulged in a rainbow of prescription drugs, hitting a new low — or high? — in tabloid pill-popping.)

Of course, there is a flipside to all of this: The great prescription medication march has reduced the stigma of certain psychiatric illnesses. (But by no means all: See what happens next time you tell someone you have schizophrenia.) Many patients find the drugs helpful, particularly those who actually have the symptoms of what the drugs were originally intended to treat — major clinical depression — and not just the blues, or financial, career or relationship problems, all of those things that we used to regard as life problems, and not medical or diagnosable ones.

But there is something dark and undeniable shifting in our cultural mood, too. Sure, there is manipulation in the advertising and confusion about what constitutes legitimate “serious and persistent mental illness” (a formal term to describe the afflictions of the very small percentage of people who suffer from severe bipolar disorder, major depression or psychotic disorders) as opposed to the far more normative, if often very painful, stressors and issues of living life in the early 21st century. Yet I would also say that misery and — if one were to use a slightly more clinical word, anxiety — are at one of their periodic high points. Arguably we have entered a new age of anxiety, a term associated with the post-World War II era through the 1960s, when the prevailing belief was that the world might blow up at any moment (and on the medication front, Valium was king). Maybe there’s some weird synchronicity that the hottest thing in our present cultural moment, "Mad Men," is set firmly in that era. In any case, I have written widely about mental health and have traveled the country in the last couple of years and, given the nature of my writing, have been sought out by all kinds of troubled souls. I can claim confidently that there is, right now, a high-water mark of worry and suffering on numerous fronts — economic, of course, but also social, with our ever-increasing isolation and Internet-driven loss of human connection and the ongoing trauma of wars and crises that just don’t seem to end.

As W.H. Auden wrote in 1947, in a play called "The Age of Anxiety": “When the historical process breaks down … when necessity is associated with horror … then it looks good to the bar business.” Substitute “antidepressant” for “bar,” and you have our situation in 2009.