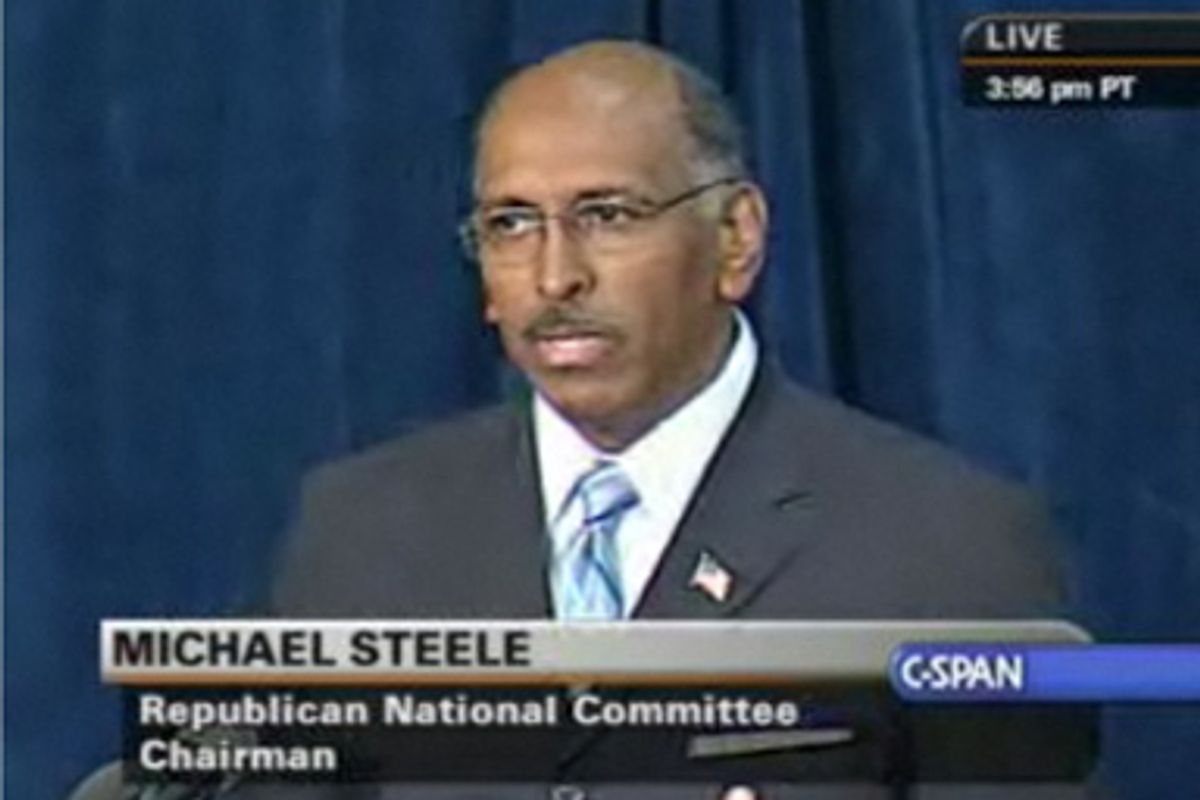 WASHINGTON -- Back in January, Michael Steele promised the Republican National Committee that he'd bring the GOP brand into places it hadn't been seen in a while. On Tuesday night, the world finally learned what he meant.

"What's up, Howard? How's it goin'?" Steele asked, taking the podium at Howard University -- one of the nation's oldest, and most prestigious, historically black colleges -- for a stop on what the RNC is calling his "Freedom Tour."

Howard is, indeed, not the kind of place where the GOP has been particularly popular lately. The District of Columbia, after all, gave 92 percent of its votes to President Obama last fall, and around the country, black voters were even more supportive of the Democratic ticket. The visit didn't exactly seem to stir the campus; in the student union building, the line to get into the cafeteria two floors below Steele's speech was much longer than the line to get into the talk, and the first two rows were filled in, just before the program began, by about two dozen mostly white College Republicans from other D.C. universities. Questions for what was billed as a town hall meeting had to be submitted days in advance to the Howard chapter of the college GOP.

It wasn't entirely clear that Steele was the man to turn that dynamic around -- for one thing, he only wound up taking two of those pre-screened questions, in part because he spent most of his time acting like a TV talk show host. Minutes into his talk, he fled the podium and started wandering around the room with a handheld microphone, off in search of a connection with his audience however he could find it. The RNC chairman had come to Howard with a mission -- but he may not have chosen it that wisely. For the first 40 minutes or so of his hour-long talk, Steele's message boiled down to vague platitudes about black professional role models, the need for young people to pay attention to politics and the sheer unlikelihood of his journey from D.C.'s Petworth neighborhood -- just a few miles up Georgia Avenue from Howard's campus -- to the top of the RNC. ("I grew up on 8th Street, part of the 8th Street Crew," he said, as if he was confessing to a long-ago gang affiliation. "My sister gave us that name; it was just the two of us." Cue polite laughter.)

Steele paced the room, asking students to stand up and tell him what their post-college hopes and dreams were, and trying to encourage them to reach them. (The biggest round of applause all night came when one student told Steele she hoped to be a U.S. senator from Maryland, and he said that probably meant she'd be a Democrat.) "It's important to be here, to show you that from 8th Street NW to this moment, it happens," he said. "It can happen." Which was true enough. But since nearly everyone he called on said they wanted to go to law school -- the talk was, after all, co-sponsored by Howard's Political Science Society -- the message flirted with condescension.

Things got worse when a young white woman (whom the Washington Independent's Dave Weigel identified as Amanda Duzak, a Towson University graduate student) interrupted him to say her mother had recently died of cancer because she couldn't pay for her chemotherapy. The crowd cheered -- and another RNC official there quietly gestured to a nearby campus police officer, who began walking over toward Duzak. People all around the room started shouting at Steele about how everyone in the country should have healthcare, and applauding those who were interrupting him.

But just when it seemed like Steele might have to slink out of the hall, he recovered -- by blasting Duzak for heckling him. "You can shout, and I can ignore you," he told her. "It makes for great TV. You'll probably make it tonight. Enjoy it." It was a harsh putdown, but it silenced the crowd (not to mention Duzak, who by that point was being escorted out by the police). The video is here:

"For a while, I thought his point was to, like, encourage black people, to be an all-inspiring, 'You can do this, too,'" Lindsey Smith, 19, a sophomore political science major from Durham, N.C., told me after the talk, rolling her eyes a bit. "We're already in college. There are people I left behind who need that. Most of the people who come here were coming specifically to hear about the GOP side" of politics -- not to hear a motivational talk.

For most of the night, no matter how he tried, Steele couldn't quite get the audience on his side. And he certainly did try. He constantly brought up Obama, asking the students if they would have ever thought "you would have two African Americans sitting atop the political class of this country." In Steele's mind, it seemed, being chairman of the RNC was more or less the same thing as being president. "It's not just a political game," he said of Washington's policy battles. "It's not just Barack Obama and Michael Steele going back and forth."

At one point, he started reminiscing about his garbled attempts earlier this year to talk about how he would bring GOP principles to "urban-suburban hip-hop settings." When that happened, "a lot of people just... they went to a stereotype, black and white," Steele said. "What I was saying was not talking about Republicans, all of a sudden, walking around with the whole 'bling bling,' and the pants, and -- no, that wasn't it. And it wasn't glorifying what many in the community have been pushing back on, in terms of the violence and the language and all the other aspects." As he said "bling bling," he leaned back and sort of danced, as much as a former lieutenant governor can dance. But what, exactly, did he mean? "It was about the ability to create wealth," Steele explained. "It was about the ability to create legacy wealth. You have amongst you right now a generation of African American entrepreneurs who are creating enormous wealth, and they're investing some of it in the community. They are controlling that wealth. How are they doing it? Well, instead of the publisher or the record company owning the rights to their music, they own the record company -- big difference." Steele's whole hip-hop metaphor, apparently, was based on the idea that rap MCs are rich, and therefore should be Republicans. (Don't tell Jay-Z.) Or something. The crowd, by that point, seemed to be having as tough a time following his logic as I was, and he still hadn't taken any questions.

By the time he finally did, Steele nearly lost the room altogether. Asked about healthcare policy, Steele started to dismiss the idea of a public health insurance option as part of reform proposals.  One question later, Steele was done, and he rushed out of the room to meet with campus journalists -- who didn't exactly give him rave reviews.  "He came in here with a staged program, he knew exactly what he was doing -- it was not an open dialog," said Kristal Hansley, 20, a junior political science major from Brooklyn. "If you want to have a debate, don't talk to us like we're kindergarteners; we understand what's going on." Apparently, though, that's just how Steele rolls.