Establishment journalists and pundits know they are culpable in war crimes; that's why they want to Look Forward.

In one of the most drearily predictable media developments ever, David Broder today -- yet again -- joins in with an endless string of establishment pundits to demand that there be no investigations by the DOJ of war crimes and other felonies committed by the Bush administration.  The one silver lining from all of this is that it has clarified a crucial political fact:  most establishment "journalists" don't believe in the rule of law for political elites -- period.  They believe high political officials should be able to break the law -- commit felonies -- and be immunized from legal consequences.  To any reasonable observer, that is simply no longer in doubt.  Opposition to investigations -- especially for the real culprits as opposed to low-level interrogators -- is as close to a unanimous media view as something can be (though the NYT Editorial Board today, standing virtually alone, calls for full criminal investigations, including of high-level Bush officials).

Broder claims he "agree[s] on the importance of accountability for illegal acts and for serious breaches of trust by government officials -- even at the highest levels."  As examples of this "agreement," he cites this:  "I had no problem with the impeachment proceedings against Richard Nixon, and I called for Bill Clinton to resign when he lied to his Cabinet colleagues and to the country during the Monica Lewinsky scandal."  But he then goes on to boast that he supported Ford's pardon of Nixon.  He thought the prosecution of Lewis Libby was "silliness."  He simply believes that "the rule of law" is only for ordinary Americans, not for powerful political officials who commit felonies -- and in that, he's completely typical of the Beltway mindset.  It's not an accident that he's the Dean of Washington Journalism; he is a perfect embodiment of that culture.

That media elites -- ostensibly devoted to accountability for the powerful -- fulfill the exact opposite role by demanding immunity for their lawbreaking is why elite lawlessness is so rampant.  But that's well-established by now,  so I want to focus on another point raised by this Broderian opposition:   a completely self-serving falsehood that lies at the core of the debate over investigations.  The standard claim made by investigation opponents in the media is that we all know that torture is abhorrent and that what was done is terribly wrong, but that prosecutions would just be too disruptive.  Broder asks:  "Ultimately, do we want to see Cheney, who backed these actions and still does, standing in the dock? . . . The cost to the country would simply be too great."

But it's simply not true that these journalists vehemently objected to torture as abhorrent but now merely believe prosecutions are an over-reaction.  The reality is that they did not object to the torture regime as it was implemented.  They did the opposite:  they mocked those who objected to it and who tried to stop it as overheated, hysterical, fringe leftists -- as Broder did in a November, 2004 Op-Ed, deriding as "unhinged" those who were arguing "that 'the forces of darkness' are taking over the country."  Identically, here's what Broder said in an October, 2006 chat when a reader asked him about a New York Times Editorial sounding the alarm about the radicalism of the Bush administration:

Kingston, Ontario: I'm rather surprised by your and your correspondents' calm tone of voice this morning. Unless the New York Times editorial page is wildly off-track, the U.S. is in the grip of a major constitutional crisis, with the government trying to set aside long established guarantees of legal behavior, both internally and in relation to international law. Where's the sense of urgency?

David S. Broder: Far be it from me to question the New York Times, but I'd like to assure you that Washington is calm and quiet this morning, and democracy still lives here. Editorial writers sometimes get carried away by their own rhetoric.

That was typical of Beltway media behavior even as revelations of war crimes and high-level lawlesness proliferated:  oh, calm down with your extremist, unhinged rhetoric.  Broder boasts that he called for Clinton's resignation over a sex scandal and "had no problem with" Nixon's impeachment over what was, by comparsion to Bush scandals, a relatively minor infraction.  As revelations of torture mounted, did he call for Bush's impeachment or even resignation?  No.  Like most of his colleagues in the media, he did the opposite:  he dismissed objections to what was happening as hysterical and fringe and insisted that Serious and Good People were in charge.

This is a vital reason -- I'd say the central reason -- why people like David Broder and his media colleagues don't want investigations and prosecutions:  because they were complicit in most of it, and such proceedings would implicate them as much as the criminals themselves.   Think about it:  what would happen if Dick Cheney were "in the dock," if high-level American officials were adjudicated in formal proceedings as war criminals and felons?  The question would naturally arise:  how was that allowed to happen?  What did the American media do about it while it happened?  What was the Dean of the Washington Press Corps saying and doing to stop it and to alert the citizenry as to what was going on?  And the answer, of course, is:  nothing.  They supported the war criminals and mocked and demonized those who objected.

That's why so many media figures want to Look Forward and Not Backwards -- not only because they want to protect high-level political officials who committed felonies and thus preserve America's two-tiered justice system, but more so, because they know that "looking backwards" would reveal who and what they really are.  People who engage in heinous acts always want everyone to look forward and not backwards, for reasons that are as obvious as they are ignoble.  Tom Tomorrow captured this mentality perfectly in a cartoon this week (click to enlarge): 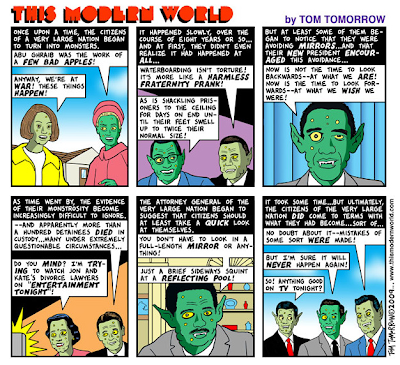 Yesterday, Physicians for Human Rights issued a new report which finds that CIA doctors "came close to, and may even have committed, unlawful human experimentation" on detainees in U.S. custody, as "doctors actively monitored the CIA's interrogation techniques with a view to determining their effectiveness, using detainees as human subjects without their consent."  Human experimentation on helpless detainees.  Is it any wonder that the people who are responsible for that and helped to enable it -- critically including media stars who waved it all away -- don't want any light shined on what was done?  If you were them, would you?

While all this was occurring, David Broder and most of his media colleagues not only failed to object, but were insisting that nothing extremist, radical or lawless was taking place.  They demonized those who raised the alarm bells and tried to stop it.  Their opposition to investigations is absolutely grounded in their rejection of the rule of law for political elites, but at least as much, it's a desperate effort to protect themselves and shield themselves from the accountability and shame they so intensely deserve.

UPDATE:  Brad DeLong makes the case that David Broder is -- how shall we say?  -- not telling the truth in today's column when he claims he "had no problem" with the impeachment of Richard Nixon.