The looming political war over Afghanistan

The costs of being a nation permanently at war are rarely weighed in war debates. 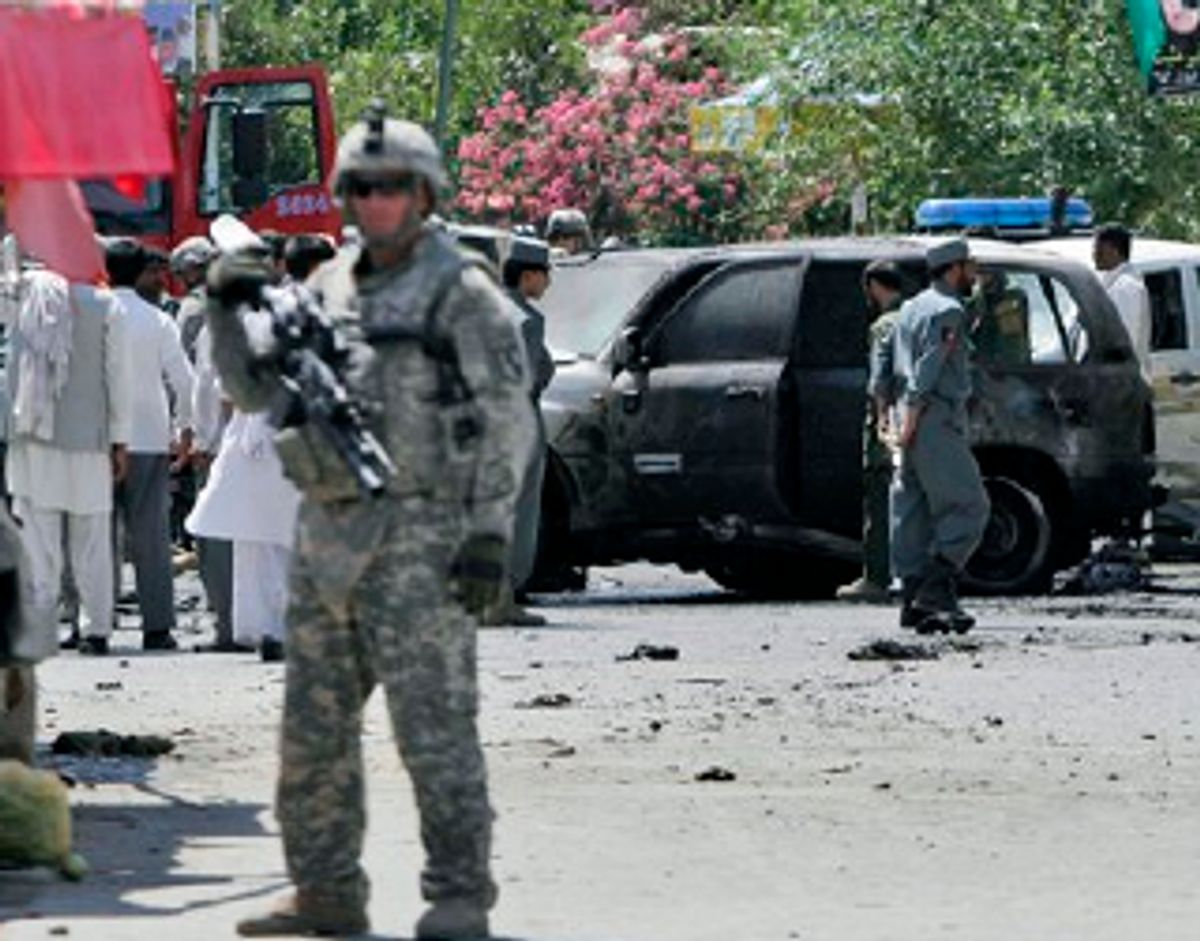 A U.S. soldier stands guard near the site of a suicide attack in Mehterlam, the capital of Laghman province, east of Kabul, Afghanistan on Wednesday, Sept. 2, 2009. A Taliban suicide bomber detonated his explosives as Afghanistan's deputy chief of intelligence visited a mosque east of Kabul on Wednesday, killing the Afghan official and 22 others. (AP Photo/Rahmat Gul) (AP)
--

There was a time, not all that long ago, when the U.S. pretended that it viewed war only as a "last resort," something to be used only when absolutely necessary to defend the country against imminent threats.  In reality, at least since the creation of the National Security State in the wake of World War II, war for the U.S. has been everything but a "last resort."  Constant war has been the normal state of affairs.  In the 64 years since the end of WWII, we have started and fought far more wars and invaded and bombed more countries than any other nation in the world -- not even counting the numerous wars fought by our clients and proxies.  Those are just facts.  History will have no choice but to view the U.S. -- particularly in its late imperial stages -- as a war-fighting state.

But at least we paid lip service to (even while often violating) the notion that wars should be waged only when absolutely imperative to defending the nation against imminent threats.  We largely don't even bother to do that any more.  Consider today's defense of the war in Afghanistan from the war-loving Washington Post Editorial Page.  Here's their argument for why we should continue to wage war there:

Yet if Mr. Obama provides adequate military and civilian resources, there's a reasonable chance the counterinsurgency approach will yield something better than stalemate, as it did in Iraq.

Does that sound like a stirring appeal to urgent national security interests?  Why should we continue to kill both Afghan civilians and our own troops and pour billions of dollars into that country indefinitely?  Because "there's a reasonable chance the counterinsurgency approach will yield something better than stalemate."  One can almost hear the yawning as the Post Editors call for more war.  We don't need to pretend any more that war, bombing and occupation of other countries is indispensable to protecting ourselves; as long as "there's a reasonable chance it will yield something better than stalemate," it should continue into its tenth, eleventh, twelfth year and beyond.

Of course, the reason the Post editors and their war-loving comrades can so blithely advocate more war is because it doesn't affect them in any way.  They're not the ones whose homes are being air-bombed and whose limbs are being blown off.  That's nothing new; here's George Orwell in Homage to Catalonia, describing (without knowing) Fred Hiatt in 1938:

The people who write that kind of stuff never fight; possibly they believe that to write it is a substitute for fighting. It is the same in all wars; the soldiers do the fighting, the journalists do the shouting, and no true patriot ever gets near a front-line trench, except on the briefest of propaganda-tours.

Sometimes it is a comfort to me to think that the aeroplane is altering the conditions of war. Perhaps when the next great war comes we may see that sight unprecedented in all history, a jingo with a bullet-hole in him.

This point was made equally well by Chuck Hagel today, in a Post Op-Ed, comparing his actual first-hand experiences in Vietnam to the ongoing waste in Afghanistan:

Too often in Washington we tend to see foreign policy as an abstraction, with little understanding of what we are committing our country to: the complications and consequences of endeavors. It is easy to get into war, not so easy to get out. Vietnam lasted more than 10 years; soon, we will slip into our ninth year in Afghanistan. . . .

The U.S. response, engaging in two wars, was a 20th-century reaction to 21st-century realities. These wars have cost more than 5,100 American lives; more than 35,000 have been wounded; a trillion dollars has been spent, with billions more departing our Treasury each month. We forgot all the lessons of Vietnam and the preceding history.

No country today has the power to impose its will and values on other nations. . . . Bogging down large armies in historically complex, dangerous areas ends in disaster.

That -- the luxury of viewing war "as an abstraction" -- is a perfect explanation for today's pro-war Post Editorial and for the more generalized willingness to continuously start and continue more and more wars, even in the absence of anything remotely approaching a "last resort" rationale.  The question of whether the initial decision to invade Afghanistan was justifiable is completely distinct from whether it should have been made and, even more so, whether the occupation and war should continue.

There seems little doubt that a major political conflict over Afghanistan in imminent and inevitable.  A newly released CNN poll yesterday revealed that opposition to the war is at "an all-time high" -- with 57 percent opposing the war and only 42 percent supporting it.  Even more notably, 75% of Democrats and 57% of independents oppose the war.  As Spencer Ackerman noted yesterday, support for Obama's war comes largely from the party of Rush Limbaugh and birtherism, "the people who want most to destroy Obama's presidency."  The New York Times reported last week that "a restive antiwar movement . . . is preparing a nationwide campaign this fall to challenge the administration’s policies on Afghanistan."  Politico similarly reported last week that the White House fears growing liberal opposition to the war.  And in the wake of George Will's Op-Ed yesterday calling for withdrawal, the Post Editorial noted the coalition clearly forming against the war:

The Democratic left and some conservatives have begun to argue that the Afghan war is unwinnable and that U.S. interests can be secured by a much smaller military campaign directed at preventing al-Qaeda from regaining a foothold in the country. Sen. Russell Feingold (D-Wis.) has proposed a timetable for withdrawal -- the same demand the left rallied around when the war in Iraq was going badly.

Note -- as usual -- that what is, in fact, the view of a very large majority is dismissed as nothing more than a belief on the part of "the Democratic left" and a few conservatives.  But no semantic games can mask the fact that support for the war in Afghanistan is quickly turning into a small-minority view -- one sustained overwhelmingly by the very Republican Party whose foreign policy drove the country into the ground over the last decade.

But as became clear with Iraq, the "mere" fact that a large majority of Americans oppose a war has little effect -- none, actually -- on whether the war will continue.  Like so much of what happens in Washington, the National Security State and machinery of Endless War doesn't need citizen support.  It continues and strengthens itself without it.   That's because the most powerful factions in Washington -- the permanent military and intelligence class, both public and private -- would not permit an end to, or even a serious reduction of, America's militarized character.  It's what they feed on.  It's the source of their wealth and power.

Remember all the talk during the presidential campaign about how, when it came to national security, John McCain was such a dangerous maniac, a war-monger, an extremist hawk?  This was the exchange McCain had with George Stephanopolous last month:

STEPHANOPOULOS: Would we be fighting these two wars any differently if you were president now?

That, of course, is the trend that has been repeating itself over and over:  while Obama has certainly deviated from what the GOP would do in the realm of domestic policy, he has embraced the core prevailing principles of Bush/Cheney in the areas of war fighting, civil liberties, "counter-terrorism," and secrecy/transparency -- i.e., in the full-throated continuation of the National Security State (Politico's Josh Gerstein -- who, despite where he works, is a very good reporter -- writes about the latest such episode here).

All of these issues can't be separated from one another.  A country that turns itself into a war-fighting state, a militarized empire, is choosing what kind of country it wants to be.  And as long as that continues, everything else -- wild expansions of executive power, the explicit rejection of the rule of law for elites, a continuous erosion of civil liberties, ever-expanding secrecy justifications, supreme empowerment of a permanent national security class whose power transcends elections -- are all necessary and inevitable by-products.  As Thomas Jefferson observed in an 1810 letter to Ceasar Rodney: "In times of peace the people look most to their representatives; but in war, to the executive solely."  Jefferson was assuming "war" was a temporary state of affairs; where, as with us now, it's the permanent reality, the effect is far greater.  As long as a President is waging wars and trying to control the world through military force, he desperately needs the CIA, the military, the entire National Security State apparatus, and thus cannot "change" policies of secrecy, civil liberties, privacy and the like -- even if he wanted to.

That's why being in a state of endless war doesn't merely raise discrete questions of this policy or that; it  changes the character of the nation.  Whether to continue our massive National Security State and general imperial behavior (unsustainable in any event) is at least as important a question in the debate over Afghanistan as specific questions raised by the war itself.

Of all the enemies of true liberty, war is, perhaps, the most to be dreaded, because it comprises and develops the germ of every other. War is the parent of armies; from these proceed debts and taxes; and armies, and debts, and taxes are the known instruments for bringing the many under the domination of the few.... No nation can preserve its freedom in the midst of continual warfare.

We have "continual warfare"; Madison couldn't have been clearer about the inevitable outcome of that.