A critical ruling from a Bush-43-appointed judge demonstrates the dangers of Obama's desired detention scheme.

Yesterday -- in a very significant decision (.pdf) written by Bush-43-appointed federal judge Milan Smith and joined by a Reagan-appointed judge -- the Ninth Circuit Court of Appeals allowed a lawsuit to proceed that was brought against John Ashcroft for the illegal and unconstitutional detention of American Muslims.  The suit was brought by Abdullah al-Kidd, an American citizen of African-American descent who converted to Islam.  Al-Kidd was arrested, detained under abusive conditions, and then had his movements and freedoms severely restricted for sixteen months despite no evidence that he had done anything wrong.

The suit arises out of a policy established by Ashcroft of abusing the "material witness" statute, which authorizes the detention of key witnesses to a criminal case where it's likely they will be unavailable to testify in the absence of their pre-trial detention.  Ashcroft used that statute as a pretext for arresting American Muslims where there was insufficient evidence to establish probable cause they had committed a crime (the standard required to justify their arrest).  In other words, Ashcroft's DOJ would pretend that they wanted to detain Muslim citizens because they were "material witnesses" to a crime, when the real reason was that they suspected them of Terrorist connections and wanted to arrest and investigate them but lacked the evidence required by law to justify an arrest -- i.e., they wanted to "preventively detain" them in the absence of any criminal wrongdoing.

The real significance of this case is that it highlights the dangers and evils of preventive detention -- an issue that will be front and center when Obama shortly presents his proposal for a preventive detention scheme, something he first advocated in May.  What Ashcroft is accused of doing illegally is exactly the same thing Obama wants the legal power to do (except that Obama's powers would presumably apply to foreign nationals, not citizens):  namely, order people imprisoned as Terrorist suspects -- "preventively detained" -- where there is insufficient evidence to prove they committed any crime.

I really urge everyone to read the section of the court's decision which sets forth in a concise, clear and non-legalistic manner the facts of what was done to al-Kidd by the DOJ:  it's just 3 pages long, beginning on page 12271 ("Facts and Procedural Background") through 12274 (the three pages after that, also highly recommended, detail Ashcroft's culpability in creating this nefarious, illegal detention scheme).  Please just go read this 3-page section laying out the facts of what was done to al-Kidd's life and what preventive detention powers allow the Government to do.  Anyone who supports Obama's call for a preventive detention scheme is, by definition, supporting things like this (though, if anything, what happened to al-Kidd -- as horrible as it is -- is short and innocuous compared to what a "prolonged detention" scheme would permit:  years of indefinite, charge-free imprisonment).

The principal legal issue strictly resolved by the court here is somewhat narrow and legalistic.  A political official has absolute immunity from lawsuits based on decisions made in a prosecutorial capacity (e.g., whether to indict or prosecute someone), but not for law enforcement decisions (e.g., whether to arrest or detain someone).  You can't ever sue a prosecutor for deciding to prosecute you, but you can sue someone who arrests you if they acted illegally and in clear violation of your legal rights.  The Ninth Circuit ruled that where, as here, there is credible evidence that the real reason an official ordered someone detained as a material witness (normally a prosecutorial act) was to arrest them, that is a law enforcement act, not a prosecutorial one, and he is therefore not entitled to absolute immunity from lawsuits if he violated the law when doing so.  Hence, this lawsuit against Ashcroft personally -- alleging that he ordered Muslims detained in clear violation of their legal rights -- can proceed.

But, as the court obviously recognized, the real significance of this ruling goes far beyond that narrow immunity issue.  There are few powers more anathema to our system of government than the power to imprison people in the absence of proof that they committed a crime.  Yet when Obama advocated that Congress enact a preventive detention scheme, that is exactly the power he sought for himself.  Here is the court's eloquent concluding section, manifestly applicable not only to the case before it but to the wider, imminent debate over preventive detention: 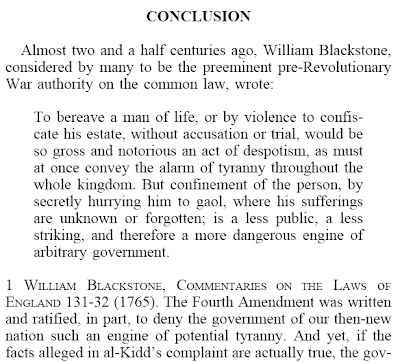 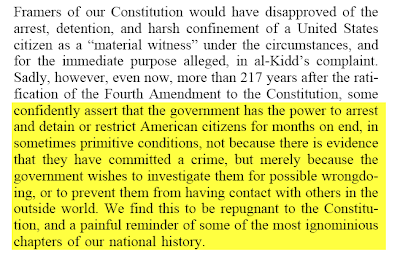 None of that changes because it is a non-citizen who is imprisoned without evidence of any crimes.  Preventive detention is a noxious and dangerous power to vest in the Government.  That's what Thomas Jefferson meant when -- in a 1789 letter to Thomas Paine -- he wrote:  "I consider [trial by jury] as the only anchor ever yet imagined by man, by which a government can be held to the principles of its constitution" (emphasis added).  John Ashcroft's abuse of the material witness statute to "preventively detain" numerous American Muslims who had done nothing wrong was "repugnant," dangerous and tyrannical -- and that's exactly what any Congressional scheme would be that purports to vest the President with the legal power to "preventively detain" people in the absence of criminal charges.