Why does CW's "Vampire Diaries" leave us cold, while WE's "Adoption Diaries" has us crying our little eyes out? 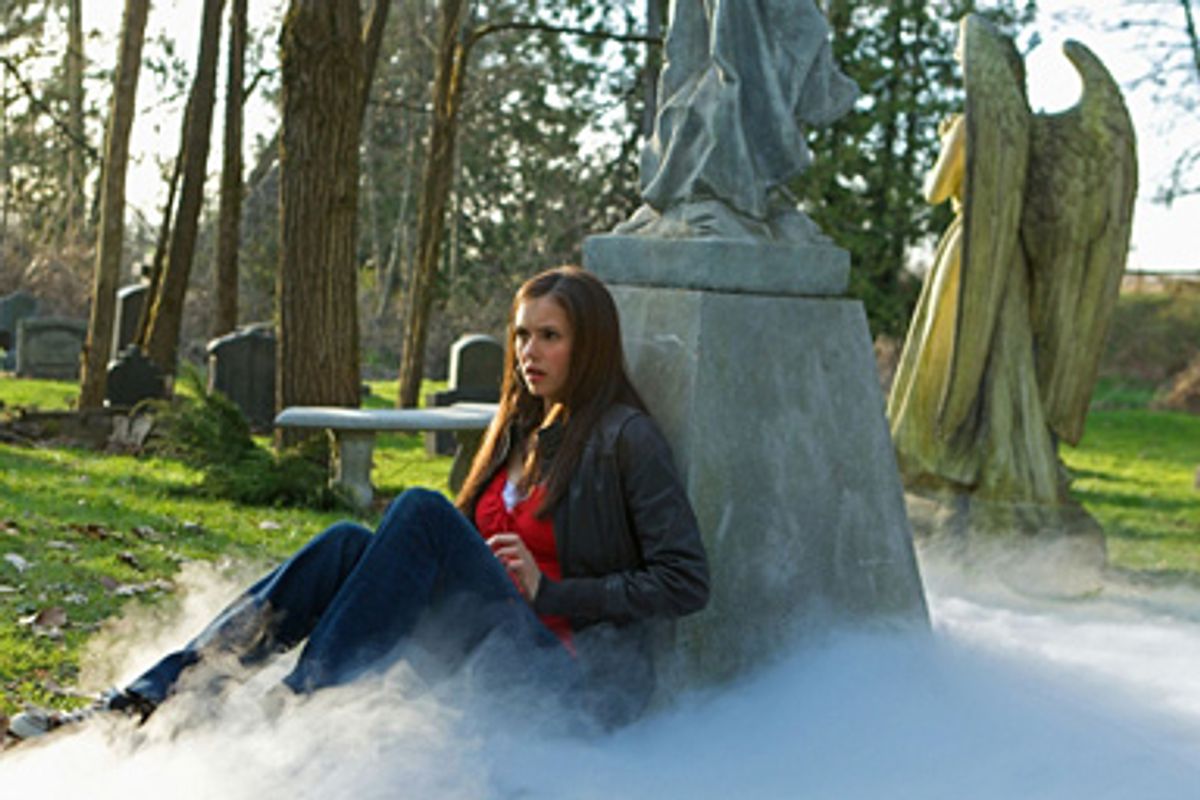 Nina Dobrev in "The Vampire Diaries."
--

Shouldn't voice-overs be considered an utterly passé gimmick, 11 years after the debut of "Sex and the City"? Sure, they're great as a comic device on "Glee," but do I really want the bland, soulless teen models of the CW's "Vampire Diaries" (premieres 8 p.m. Thursday, Sept. 10), telling me their innermost thoughts in a hokey "Dear Diary"-style voice-over, considering that those thoughts are about as compelling as the graffiti scrawled inside the stalls of the girls' bathroom at the local high school?

Why must these characters relay their impoverished inner lives to me as if I'm their diary, Diary, or worse yet, as if I'm their overpaid psychotherapist and not just a pathetic human being who has nothing better to do than listen to the sad notions running through a teenager's mind, as imagined by an overpaid 40-something writer who makes his nut by plugging the words "vampire," "horror" and "hotties" into his John Hughes Automated Scriptwriting Software?

And while I'm complaining to you, trusted Diary, let me add that I'm tired of vampires. Yes, it's true that I've grown unnaturally fond of "True Blood," with its kaleidoscope of depravity and viciousness. I especially love Eric, and want to see him rip Sookie out of the arms of that wet rag Bill. I love that Alan Ball's vampires are ghoulish and disgusting but still sympathetic, I love Jason Stackhouse's recent alliance with Deputy Andy, and I love Michelle Forbes' Maryann, in all her hideous, heart-devouring glory.

But pretty, sensible teenage vampires who talk like depressed extras on "Hannah Montana"? Why, Diary? Why?

Don't give me that look, Diary. I know I should work on my unrealistic expectations. But I have to whine to someone, don't I? I knew I never should've left you alone with the Tao Te Ching the other day.

Caught in desire, you only see black and white. When people see some things as beautiful, other things become ugly. You "love" "True Blood," and so, of course, "Vampire Diaries" must be hated. I would feel pity for you, if I hadn't transcended such limiting emotions by practicing non-attachment.

Voice-overs, like vampires and the tao itself, are timeless. Just because you, as a subjective human being, clawing blindly in the dark, don't want to watch a bunch of irreproachably cute teenagers experiencing unconvincing turmoil over their blank-faced crushes, that doesn't mean that lots of very nice if slightly unoriginal preteens might not enjoy doing so. Just because you're allergic to bad dialogue and awkward blocking, just because you roll your eyes and sigh when there are bloodshot eyes and black crows, and an ungodly volume of dry ice in the mix, that doesn't mean that there aren't tens of thousands of dimwitted kids who'd dig this sort of thing.

The Master doesn't take sides, and therefore wouldn't offer either a spiritual thumbs up or thumbs down on "Vampire Diaries," but personally, I find the extreme emptiness of these teenagers, who've been encouraged to feign soulful, passionate feelings they've never felt before, somewhat inspiring. In the void of their hollow smiles, there are infinite possibilities.

Unlike you, I recognize the appeal of Elena (Nina Dobrev), the brooding but perky, recently orphaned heroine, with her flat-ironed hair and her unthreatening, every-girl good looks, the kind that would be right at home in a Playtex tampon advertisement in the pages of Seventeen magazine. I appreciate the poignant, almost nostalgic, "Afterschool Special" flavor of Jeremy (Steven R. McQueen), Elena's little brother who, predictably enough, smokes doobies, peddles mind-altering pills, and has become something of a rebel in the wake of his parents' sudden death. I welcome the ways that Stefan (Paul Wesley), the sweet-hearted vampire, conjures James Van Der Beek from "Dawson's Creek," both in his cluelessness and in the way he squints hard whenever he's trying to pretend that he's feeling something weighty and important. I don't blame him for falling for Elena, since their flavorless looks and flat affect seem to match perfectly. I also approve of the temperamental stylings of Damon (Ian Somerhalder), the Eeeevil Vampire Brother, with his little violent outbursts and manipulative ways. Why, he appears almost as complexly layered as Trey, Ryan's violent, devil-may-care brother on "The OC"!

In short, I applaud the audacity of ripping off "Twilight" whole hog, but dumbing it down even more for a television audience. It’s like stealing your neighbor’s pig just to make bologna sandwiches. Boldly bland, courageously commercial! If you disapprove of that, it's only because you're dead-set on comparing and competing, on being unfair and ungenerous. Keep sharpening your knife, and it will be blunt. The more you talk, the less you understand!

Do you think it's fair that people with fertility issues should tell their stories as the cameras roll, making viewers at home feel uncomfortable emotions like sadness and compassion for them? Is it right that we should be forced to ride the roller coaster of sentiment along with them, breaking down weeping at every turn at the possibility that their adoptions won't go through after so many years of hoping and praying for a baby to call their own?

Diary, I know that I'm unsteady and haunted by my petty thoughts and desires, but isn't it natural for me to feel guilty for complaining, just this morning, about having to wake up twice to feed my baby, when WE's "Adoption Diaries" (premieres 10 p.m. Saturday, Sept. 12) introduces us to couples who would tolerate any level of sleep deprivation without complaint, so ardent is their desire for a child?

Furthermore, is it right that such a personal look at the process of open adoption should cause me, despite my relative soullessness as a human, to weep snottily, right into my bare hands?

Now that I'm enlightened, I'll admit that there was a day in the not-so-distant past when I would sniff my own glue, and then hallucinate that I was beating you over the head with my hard leather exterior. I guess it was probably obvious, before my heart was at peace, that I found you horribly dull, that I cringed at the feel of your moist palms on my otherwise immaculate, pristine pages.

But the tao taught me that I can't have things exactly the way I want them, and neither can you. Just as I am a humble book of pages, bound together forever, unable to choose whether or not I'm acquired by some dashing and courageous world traveler or spiritual leader like Hemingway or the Dalai Lama, someone certain to take me in his strong hands and translate his glorious adventures and roiling emotions and metaphysical epiphanies into subtle and dexterous prose, you, too, cannot help but be an alarmingly sweaty dullard who weeps snottily into her hands at melodramatic tripe, then scratches out her piteously empty ramblings about the lowest of pop cultural offerings in my bountiful, heretofore unsullied leaves.

Likewise, the producers of "Adoption Diaries" can't be expected to hold back when faced with capturing the gushing tears and restless longings of adoptive mothers, who experience the same guilt at not being able to bear children to their loving husbands that you experience when faced with your own inherently whiny nature. But unlike you, godless, piteous hack that you are, these hopeful families recognize that the Lord (see also: the tao) works in mysterious ways, and that their suffering might one day fill them with gratitude at the blessings bestowed on them.

I don't expect you to understand the weight of the moment in the premiere, hour-long episode when Whittney, a woman who struggled through four miscarriages, was finally able to hear the heartbeat of the son that she prayed would soon be hers. Nor do I imagine you could grasp the full significance of the scene where Kolene, the young birth mother, handed over her baby, even though anyone could see that she was second-guessing herself all the while. "The heart and the head tend to betray each other at this point," explained Dr. Jennifer Bliss, the adoption counselor handling their case. There are so many unknown, uncontrollable variables in play with open adoption, a fact that makes these situations -- to be crass -- very suspenseful television.

Now, if you could watch without leaping to judgment, as I can, you could appreciate how grateful Whittney was when she gushed, "What do you say to the person that has given you your biggest dream? When I think of Kolene, she's our angel, because she's giving us our family, and we love her forever for that."

Of course a shell of a human like yourself couldn't relate when Whittney said, of her new son, "I cannot wait for those moments, those little quiet moments where I can just see the beauty of everything in this world, through him." As someone who has no real understanding of beauty, I assume you encountered such ponderous sentiments with your usual cynical distance. But for those with actual blood flowing through their veins, "Adoption Diaries" is the sort of poignant fare that demonstrates what a generous and loving act adoption is, an incredible gift by the birth mother to hopeful parents longing for their own children.

Or, as Whittney put it: "The piece of me that was missing is here." And while I would urge Whittney to never again view herself as "missing" something, since desires wither the heart, most of us -- those of us who aren't confused and spiritually bankrupt like you, at least -- can relate to how she feels.

Blowing as aimless as the wind,