I am arming my kid to the teeth

My liberal parents never let me play with toy guns as a boy. Now that my son is 4, I'm stockpiling the arsenal 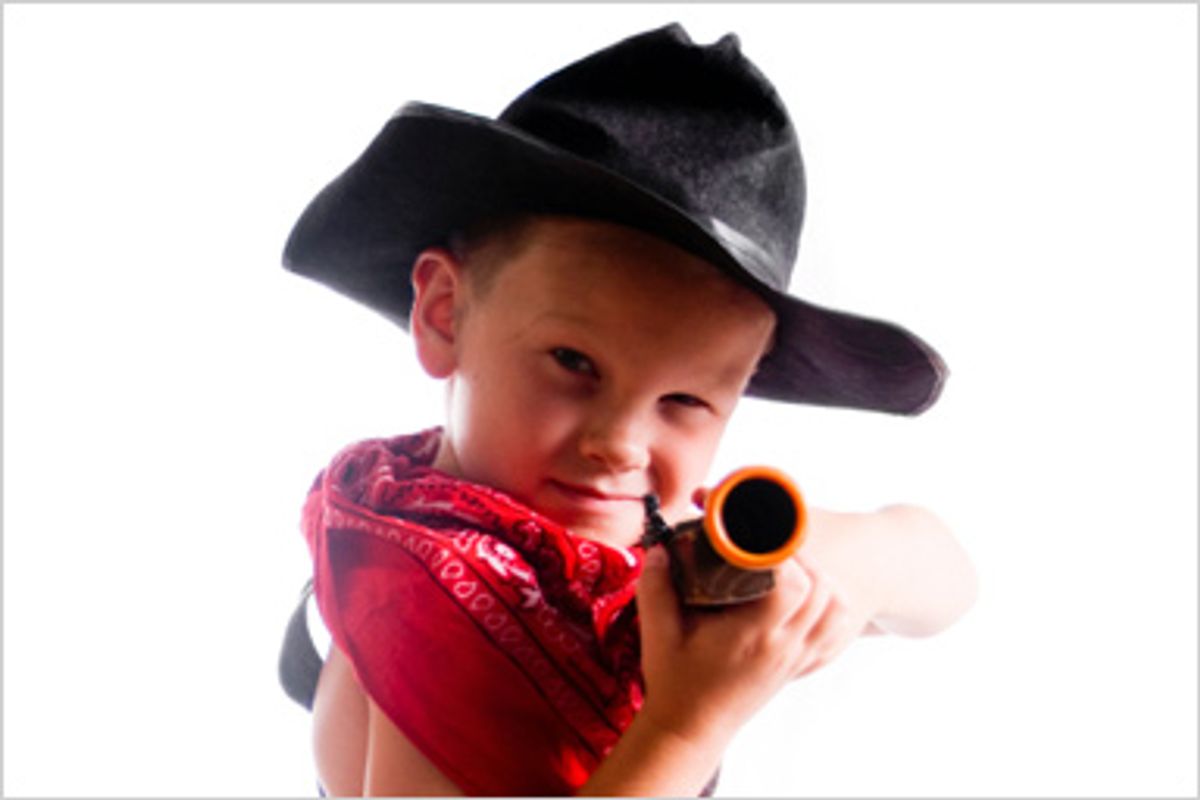 I was a violent kid. More than anything, I loved to play war. In my basement, I built a sandbag foxhole out of stacked-up sofa pillows. I would hide inside and peer out at what I imagined were the smoking slopes of Iwo Jima, crawling with Japanese soldiers ready to fight to the death.

I'd mastered different verbal screeches, bangs and zips to simulate the sounds of a firefight: The rat-a-tat-tat of submachine guns, the thud and blast of incoming artillery, the buzz-saw whine of low-flying aircraft diving in on strafing runs. I'd scream in agony when wounded, limp when shot in the leg, even wrap an appendage in gauze tape from the bathroom medicine cabinet to make it more real.

Sometimes, after an imaginary direct hit, the sandbags would spill out over into the smoking dirt. Overrun by the enemy and out of ammunition, I'd charge around the room and roll on the carpet, fighting the enemy with my bare fists.

My mind could almost invent it all. I could see buddies go down, bloody in the dirt. I could smell the gunpowder wafting over the battlefield, thick as pea soup. But there was always something lacking. No matter how powerful my imagination, it was tough to play guns without a gun.

My parents were liberal. More than liberal: Unitarians. We had a National Organization for Women poster hanging in our kitchen. A family friend stayed with us at the house while going through a sex change. My dad was, and probably still is, an advocate of the most draconian gun control proposals ever drafted, or even pondered. I'm sure both my parents voted for Carter, probably Dukakis, too. I remember a lot of family skinny dipping. Hell, my parents wouldn't even let me play on a football team.

Our family stood in sharp contrast to the countless Americans who grow up not only with toy guns, but also with real guns, as a routine part of life. Guns were anathema to my parents. Period. Guns were bad. That included toy guns.

I suppose my parents' theory was that if I played guns as a kid, I would be more likely to grow up and shoot people, or perhaps even (gasp!) join the military. Or maybe my parents were just being politically correct. Heck, maybe they were even embarrassed. Maybe it is not so cool to be sitting on your orange modular sofa, sipping Lancers and eating Triscuits and chatting with your friends who just joined a commune, and then your kid suddenly rolls a toy grenade into the living room, ambushes your guests and coolly sprays them down with imaginary hollow point bullets.

My guess is that my parents thought, "I can't stop him from playing war, but that doesn't mean I have to facilitate it." So, no guns.

(Note to parents everywhere: This part of my life marked the beginning of a good solid decade of trying to irritate my liberal parents by hanging out with jocks, acting like a homophobe, occasionally attending Catholic Church, driving around in a pickup truck, generally behaving like a jackass in myriad ways and ultimately, for a time, joining Navy Junior ROTC. The discovery of marijuana in late high school changed all that.)

I suffered and did the best I could as a child, stranded in the wilderness of the suburbs with war seemingly wired into my DNA. Like a good Marine, I improvised. Remember that kid running around the neighborhood with a painted stick? That was me.

God, how I savored going over to the houses of my gun-loving friends. Back in late 1970s, toy guns looked and felt like real guns. Wooden stocks. Dark black metal barrels. The sound and feel of the bolt sliding a fresh bullet into the chamber. Alas, they don't make toy guns that realistic anymore because sometimes the cops will shoot your kid by accident. Now they have big orange plastic thingies stuck on the end of the barrels. Excuse my nostalgia.

Back then I had one friend whose dad had fought in Vietnam. Not only did this kid have toy guns, his dad had brought back a large green duffel bag full of uniforms, boots and jungle hats and kept it under a workbench in the basement. The stuff smelled like soil. Oh, the wars we fought in that musty basement, huddled under the ping-pong table, hiding from enemy artillery.

Fast-forward 30 years, and now I am the proud parent of two children. Lovely wife. Cute brick row house. A waggly tailed, big old yellow dog. I either did something right or got really lucky, or both.

Like many young parents, I've learned that despite all my whining about my Unitarian parents, I'll be lucky to be half as patient, evenhanded, thoughtful and engaged with my kids as my folks were with me, even during my lengthy jackass stage.

That does not mean, however, that I have to do everything exactly the way they did. Now, I have a son. He is just turning 4. And I have decided to arm him to the teeth.

It wasn't my idea to get him interested in guns. The boy was born with combat in his blood. If there is still a nature vs. nurture argument going on about children's predilections, put me down firmly in the former camp. My son was obsessed with trucks and large machinery soon after exiting the womb. He started shooting at me using any household item remotely shaped like a weapon sometime after he turned 2. His older sister, in contrast, might as well have been born with a Little Mermaid tattoo on her ass. Hers were deeply feminine fantasies. Fairies. Princesses. We did not do anything in particular to shape these fantasies, clear-cut along stereotypes as they were, but we did encourage them with costumes and props. We would not have cared if she wanted to lob fake grenades onto the living room sofa, but she did not. Prattle on about the nuances of gender theory all you want, all I know is: For years, my daughter wore wings, a sparkly dress and imagined she lived in a pine cone. My son wanted to pretend to fight and kill.

The Internet, not surprisingly, is a wonderful tool for establishing your own arsenal. Imagine my wife overhearing a conversation like this as my son sat on my lap and we stared at the laptop on the kitchen table.

Me: Hey, look at this giant gun. It comes with a removable magazine and stock. That's pretty cool. You want that one?

Him: Yeah! That one! Thaaaaaat one!

Me: OK. Cool. Wait, this looks like a mortar here. I wonder if it actually shoots anything. You know what a mortar is?

All the weapons arrive on our doorstep in brown cardboard boxes. My son's latest obsession (and parents know I'm not exaggerating when I use that term) is "Star Wars." God bless his little heart. It almost brings a tear to my eye. I remember the butterflies in my stomach decades ago when I sat in a chilly theater and those giant letters first crawled up the screen and off into space: "A long time ago in a galaxy far far away …"

Our most recent purchase included a replica of Han Solo's blaster (very Uzi), a laser gun used by Jango Fett (long-barreled and high-tech) and Padme Amidala's sleek sidearm (too small for my taste). I bought the kind with batteries that simulate realistic blaster sounds when you pull the trigger. No more need to say "bang bang."

With our light sabers dangling at our sides, my son and I traverse the universe -- or at least the house, back yard and front sidewalk -- blasting away at the dark side. I got him a complete Boba Fett suit. I prefer to sport a thin headband, a tip of the hat to another hero from my youth, Rambo.

Our neighbors are no longer surprised when we jump out from behind a tree and assassinate them mercilessly as they walk down the sidewalk on their way home from work. My poor wife is riddled with blaster holes.

Playing guns at age 38 is not as fun as it was 30 years ago. But it's still moderately entertaining for short periods, particularly after a martini.

As my son and I blast away together, I will admit to a slight tug on my conscience, a nagging second thought. It is hard to deny a correlation between practicing repeated, pretend violence and somehow lowering the threshold for being able to do the real thing. I'd read Dave Grossman's "On Killing," which explains in detail how, if you take a soldier and have him pretend to kill over and over again in increasingly realistic scenarios, it is a hell of a lot easier to get him to do the real thing when the time comes. Desensitization.

Am I desensitizing my son? Creating a monster?

Maybe. But the fact that I had to resort to a painted stick certainly did not deter my innate blood lust. Nothing was going to stop me from playing out the most gruesome battlefield fantasies. I couldn't help myself. It was so much fun. It came naturally.

Eventually, I grew out of it. I am now a peace-loving dude. I have almost zero interest in guns as an adult, and not just because I know I'd probably shoot myself in the foot by accident if I had one. The interest just isn't there. It is hard for me to conjure realistic scenarios where I would even raise a fist in anger at another person. That DNA, or those brain cells, or whatever, are long gone (probably killed off in college).

Now, with my son, I have decided to play guns. Watch out if you come down our sidewalk. Bang. You're dead.