Why does Michelle Obama hate farmers? 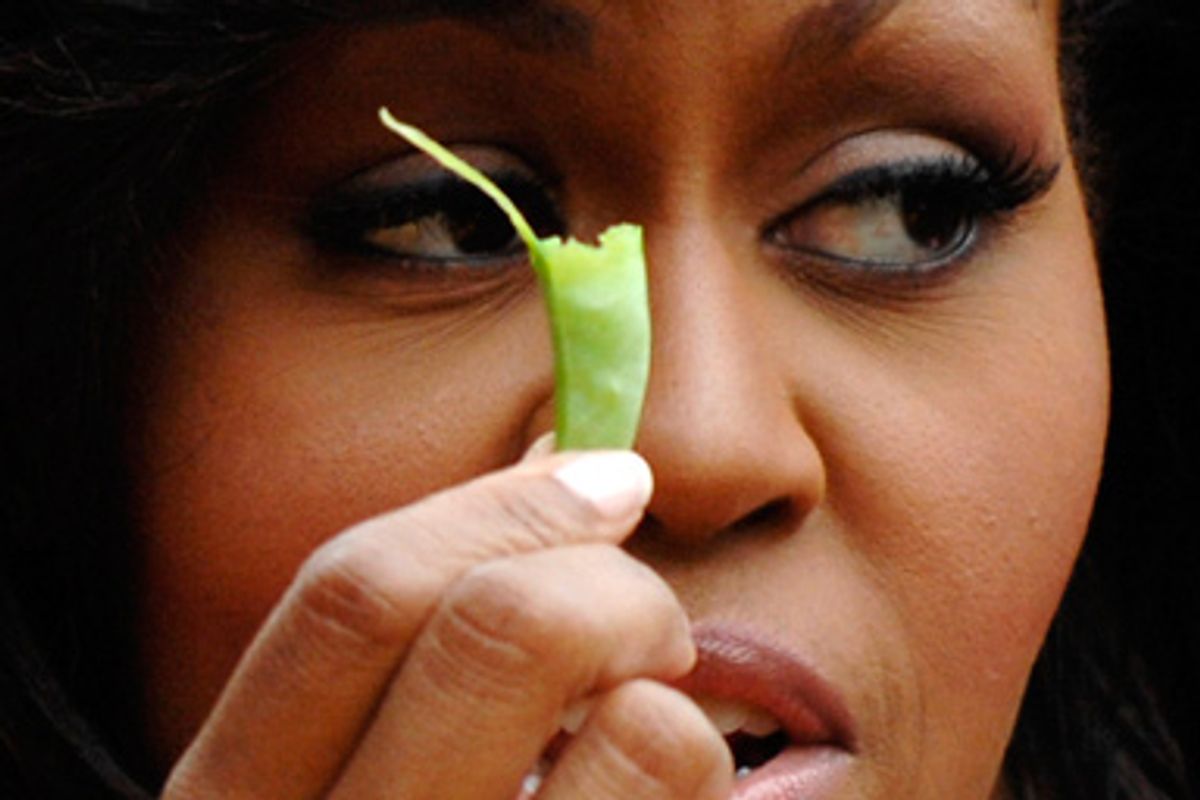 U.S. first lady Michelle Obama holds a bean harvested from vegetables grown in her garden at the White House in Washington June 16, 2009
--

The White House's relentless assault on free market capitalism continued on Tuesday: Multiple news outlets are reporting that the Office of the First Lady is "supporting" a permit application for a White House Farmer's Market on Vermont Avenue.

Most early analysis focused on potential gridlock in the region, or the security drawbacks destined to result from attracting hordes of pesticide-fearing foodies so close to the White House. But as the day wore on, more perceptive critics began to the understand the real implications of the announcement.

Republican politicians warned of a socialist re-engineering of the nation's food sector. Calling the "farmer's market" nothing more than a "sham," they accused the White House of intending to undercut the profit margins of established grocery stores with underpriced fruits and vegetables grown on the White House organic farm.

"Not content with destroying our private sector healthcare system," said one legislator, "the White House now intends to annihilate our nation's farmers and food sector with artificially low-priced vegetables produced on the White House lawn at taxpayer expense, and picked, no doubt, by illegal immigrants shamelessly enjoying the benefits of Obamacare."

Another legislator noted that page 432 of the 1700-page permit application included a stipulation that white residents of Washington, D.C. would henceforth be required to buy all their produce from the White House Farmer's Market, thus ensuring long lines for "bug-bitten, bizarrely-shaped heirloom tomatoes.... Even during the worst excesses of Stalin, Russians had more freedom to choose the turnips and rutabagas of their desire than will Americans forced to trudge their way to Michelle Obama's Socialist Farmer's Market."

Fiscal conservatives warned that in the unlikely event the White House Farmer's Market turned out to be a popular success, demand for White House produce would skyrocket, leading to devastating commodity price hikes, hyperinflation, and rising yields on U.S. Treasuries.

"The federal deficit will only become more unsustainable as a result of this unthinking application of Keynesian fiscal stimulus to local food markets," said an economist. "Furthermore, if people wanted to eat misshapen carrots and arugula they would grow it themselves -- they don't need the White House to tell them what to buy."

A spokesperson for Birthers United observed that the White House obsession with "fresh" food was just one more item of evidence proving that Barack Obama could not have been born in the United States.

"Real Americans like fast food and grease, and, if they ever find themselves eye-to-eye with a vegetable, they want it to be flash-frozen or at the very least plasti-wrapped. No one who was actually born in the United States could countenance such disregard for this country's traditions."

Liberals scoffed at the outbreak of right-wing nativist conspiracy-theorizing.

"The idea that the White House Farmer's Market poses any threat to capitalism is ludicrous," said one California Congresswoman. "I personally have witnessed black helicopters delivering genetically-modified corn and soybeans to the White House, direct from Archer-Daniels-Midland and Cargill warehouses. Have you or anyone else actually seen Michelle Obama get her hands dirty in her "garden" since the first day it was announced? I call, once again, for the public genetic testing of the White House lettuce that will prove that, as I suspect, we have been made the unwitting dupes of Monsanto. Even worse, by diverting us with their Potemkin garden, the Obama administration is once again distracting us from the real crime -- the destruction of our planet's ecology by rampaging agribusinesses."

The White House had no comment, encouraging both left and right critics to accuse it of "spinelessness."