The WSJ publishes more crazy from Sarah, while Dowd, Carville, Gergen others weigh in on the healthcare stakes 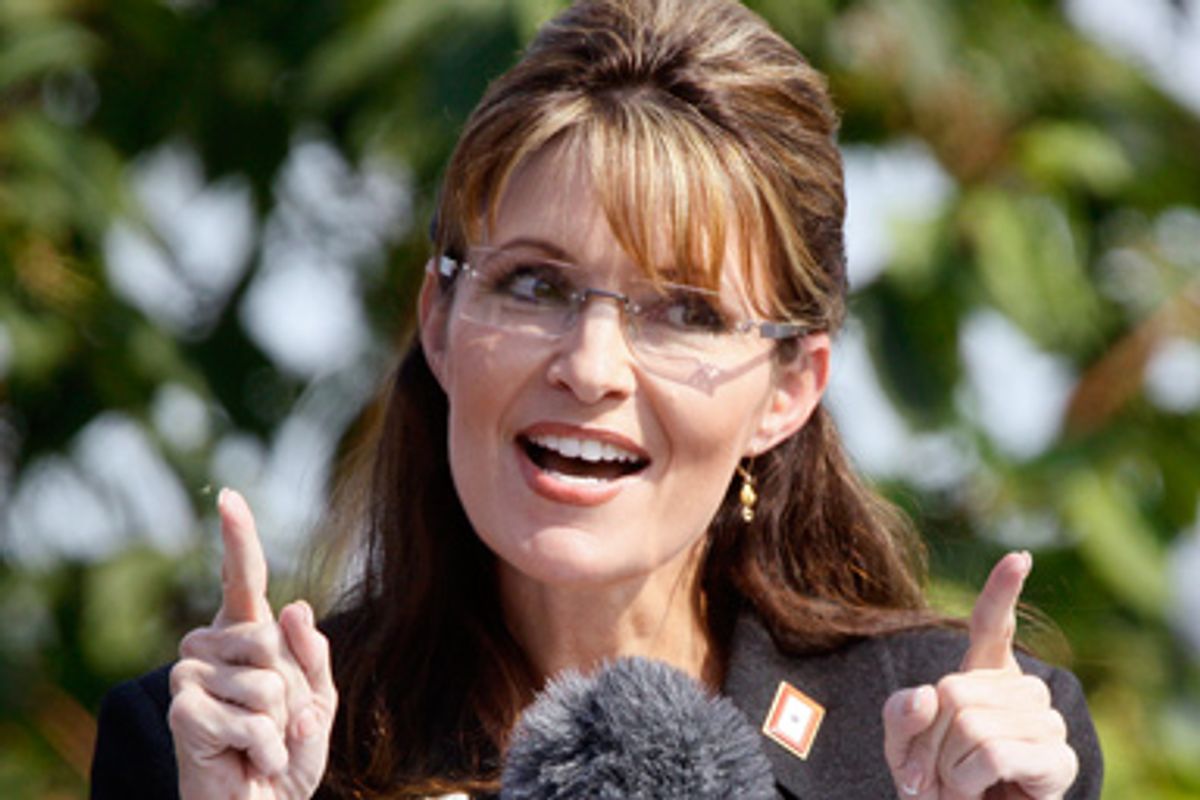 Depending on who you listen to, President Obama's speech tonight before a joint session of Congress on healthcare will either be a major turning point in getting reform passed or the final nail in the proverbial healthcare coffin. However, people on both sides of the political aisle do seem to agree on one thing: Obama's speech is a major event and could significantly impact the healthcare reform debate going forward.

With tonight's speech looming and as a political figure who never seems to miss an opportunity to make headlines, in today's Wall Street Journal former Alaska governor Sarah Palin blasts Obama's healthcare policies. Palin's piece invokes a populist "we" rallying cry against governmental involvement in healthcare and reiterates many of the same, tired arguments, including "death panels," against healthcare reform that have been debunked time and time again in the past. But Palin has seemingly never let the truth stand in the way of a good story and thus she writes:

Now look at one way Mr. Obama wants to eliminate inefficiency and waste: He's asked Congress to create an Independent Medicare Advisory Council—an unelected, largely unaccountable group of experts charged with containing Medicare costs. In an interview with the New York Times in April, the president suggested that such a group, working outside of "normal political channels," should guide decisions regarding that "huge driver of cost . . . the chronically ill and those toward the end of their lives . . . ."

Given such statements, is it any wonder that many of the sick and elderly are concerned that the Democrats' proposals will ultimately lead to rationing of their health care by—dare I say it—death panels? Establishment voices dismissed that phrase, but it rang true for many Americans. Working through "normal political channels," they made themselves heard, and as a result Congress will likely reject a wrong-headed proposal to authorize end-of-life counseling in this cost-cutting context. But the fact remains that the Democrats' proposals would still empower unelected bureaucrats to make decisions affecting life or death health-care matters. Such government overreaching is what we've come to expect from this administration.

As Marc Ambinder points out at the Atlantic in a post titled, "Media Challenge: Will They Take The Palin Bait?", there is no reason why Palin should be viewed as an authority on healthcare or her arguments taken seriously. She has no special experience in the matter.

Ambinder writes: "Sarah Palin, the former Republican vice presidential candidate, has every right to submit an opinion piece on health care to the Wall Street Journal's op-ed page, and they've got every right to print it ... But Palin's existence in this debate does not (a) lend her voice any credibility and, beyond that, even if you believe that her experience as a state governor does give her at least a modicum of credibility, it does not follow that, because her voice is credible, it ought to be influential."

But Palin is hardly the only one expressing her opinion on Obama's healthcare proposals before tonight's speech. Here's a look at what media pundits and some politicians are saying in anticipation of the address.

Maureen Dowd, New York Times: "Civil discourse is fine, but when the other side is fighting dirty, you should get angry. Don’t let the bully kick sand in your face. The White House should have impaled death panel malarkey as soon as it came up ... He should take his own words to heart. He can live long and prosper by being less Spocky and more Rocky."

James Carville, Financial Times: "I loathe those who hype speeches as make-or-break events. But .... The president not only has an opportunity to reframe the debate over health reform. He can also provide some much-needed shade for Democrats at the end of this miserable summer, and give them some hope for their 2010 electoral chances."

Mike Memoli, Real Clear Politics: "One could also argue that it's to the president's advantage to argue that Republicans are more concerned with scare tactics like 'death panels' than offering their own real alternatives."

David M. Herszenhorn, New York Times: "Mr. Obama has long said he wants a bipartisan deal on health care. But after getting pummeled by Republican critics during the Congressional recess, Democrats now consider compromise a long shot ... So watch the president’s speech closely for any sign that he is now willing to let Democrats go it alone, maybe by using a controversial procedural tactic known as budget reconciliation ... Aides have said he will draw lines in the sand. Will he?"

Camille Paglia, Salon.com: "It is theoretically possible that Obama could turn the situation around with a strong speech on healthcare to Congress this week, but after a summer of grisly hemorrhaging, too much damage has been done."

John F. Harris and Jonathan Martin, The Politico: "What’s more, as he prepares to address Congress in a nationally televised speech Wednesday, one of the main pillars of Obama’s reputation — that his gift for healing words would combine with the power of his biography to transcend the rancor of modern politics — has never looked more wobbly."

Andrew Malcolm, Los Angeles Times: "As a real good talker, the president's MO has been to leave the legislative details to the Hill, be perfectly clear about the need for a government option but hedge about its necessity and drive home instead why America can no longer go down this or that road because bad things are sure to happen if we don't change to his course, which he hasn't really spelled out but we should trust that, although unknown, it would be better than the other bad things he says are surely enroute."

Steven Pearlstein, Washington Post: ". . .  at some point he needs to look straight into the eyes of those who would have him fail and promise to do whatever it takes to break the partisan stranglehold and make health-care reform a reality."

Peter Brown, Wall Street Journal: " ... Simply put, he and Democratic congressional leaders must decide whether to roll the dice on health care. Should they go it alone and try to win passage of what they really want, without many or even any Republican votes in the U.S. Senate and House of Representatives?

Andrew Sullivan, Times Online: "Strategically? Again, he is stronger than he now appears. When the health insurance bill is passed and elderly Americans are not rounded up into concentration camps and granny isn’t subjected to euthanasia, and when many uninsured people gain a peace of mind they have never felt before, and people become able to change job without fearing loss of insurance, the Republican scare tactics may come to seem absurd."

Roger Simon, The Politico: "Each desk in the West Wing of the White House should have the same sign on it as the staff helps the president prepare for his health care speech on Wednesday: KISS ... Keep It Specific, Stupid ... This is no time for a lofty speech. We do not need inspiration. The time for inspiration has passed; the time for perspiration is at hand."

David Gergen, CNN: "In choosing to speak before a joint session before he has a deal, Obama is running an obvious risk: that Democratic liberals from the House will emerge from the speech insisting they will pass a bill only if it has a public option and Democratic moderates in the Senate will insist they will pass a bill only if the public option is dropped. That will hardly seem like unity."

Michael Gerson, Washington Post: "The main challenge for Obama is this: Announcing a more credible, specific approach to controlling health-care costs will not solve his political problem. Aggressive cost-control options -- squeezing Medicare fees even further, abandoning fee-for-service in Medicare entirely, restricting 'unnecessary' procedures through an all-powerful medical board, putting more cost burdens on individuals -- tend to be frightening or difficult. Major tax increases would lessen the need for drastic cost reductions. But the obvious source of revenue -- eliminating the health insurance deduction for employers -- would open a new front of controversy."