The White House couldn't have found a better foil for a healthcare speech than angry, shouting GOP Rep. Joe Wilson 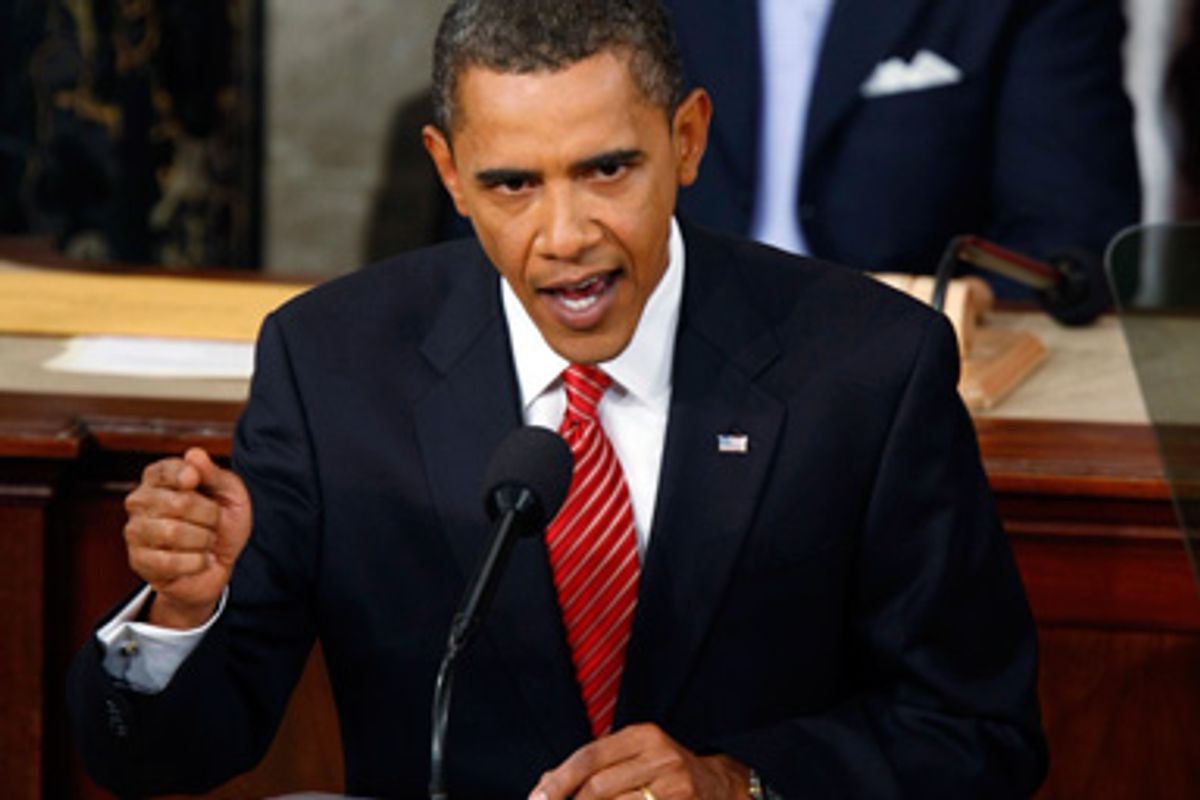 U.S. President Barack Obama delivers a speech on healthcare before a joint session of Congress, in Washington, September 9, 2009.
--

By the time the transcript was blasted out electronically to the press, of course, Wilson had already apologized, complete with a phone call to Rahm Emanuel, Obama's chief of staff. And Wilson had already been called out on TV and the Internet for his bizarre behavior. (At least he restrained himself from following in the footsteps of an earlier representative from South Carolina, Preston Brooks, and actually trying to physically beat Obama.)

All that meant that by late evening, the White House could well afford to be magnanimous. The outburst could only have helped convey the impression Obama was aiming for in his speech: that he was the reasonable one, working hard to find a solution to a problem that has bedeviled America for decades, and his opponents were simply not interested in joining the cause. The president seized the initiative in the debate over healthcare back from the Republicans, and may have started to move past the summer's bickering and into a new fall phase where something productive actually gets done. "I will not waste time with those who have made the calculation that it's better politics to kill this plan than to improve it," Obama promised. "If you misrepresent what's in this plan, we will call you out. And I will not accept the status quo as a solution. Not this time. Not now."

The speech marked the first time Obama had called, firmly, for a few specific elements of the reform plan. The government would require people to have health insurance (and provide subsidies for those who can't afford it), and it would require businesses to offer it to their employees (and it would exempt small businesses, who probably couldn't pay the tab). That would help lower the cost of insurance for everyone, since it would expand risk pools to include more healthy people. The millions of people who don't have insurance now would be offered a low-cost catastrophic coverage plan until the government is able to set up an insurance exchange for them to buy policies -- an idea Obama acknowledged he borrowed from his GOP opponent in last year's election, John McCain, in a bid to appear bipartisan. (The line drew a rueful grin from McCain, sitting in the audience.) The administration will launch experimental programs to curb medical malpractice lawsuits, which could quiet Republicans who claim, falsely, that such a reform is somehow a silver bullet to runaway medical spending. Any unforeseen cost overruns in the plan would require offsetting spending cuts, another new detail.

Much of the rest of the speech covered ground that anyone following the debate was familiar with -- but that it can't hurt to remind an anxious public, and wary lawmakers, about. The reform plans would ban insurance companies from denying coverage due to preexisting conditions, and it would cap the amount of out-of-pocket costs anyone has to pay in a given year. It would also bar health insurers from setting lifetime maximums on how much they'll pay. Insurers would be required to cover preventive care, which could theoretically mean they don't wind up on the hook for belated, and expensive, treatment later.

Obama also defended, at some length, the notion of a public option in the insurance exchange -- though he pointed out that it would only cover a small fraction of the nation, and he made clear he was willing to do without it if he had to. "It's worth noting that a strong majority of Americans still favor a public insurance option of the sort I've proposed tonight," he said -- which might come as news to anyone who watches a lot of cable TV, where the public option is increasingly treated as a radioactively radical idea. Obama left room for Congress to water the plan down, by replacing it with nonprofit co-ops or implementing it only with a time-delayed trigger, because Senate Democrats doubt they can pass reform legislation otherwise. But he also set the public option up as a centrist choice, compared to a more radical new single-payer system, and he challenged opponents to demonstrate how their preferred alternatives would meet the twin goals of reducing costs and increasing competition in the insurance market.

"He did not go where many of us would like him to have gone, which is basically to endorse a public option with Medicare's network and no triggers, but he didn't slam the door in our face," said Rep. Raúl Grijalva, an Arizona Democrat who co-chairs the Congressional Progressive Caucus, in an interview after the speech. "He did a good job of defending healthcare reform and the role that government must play in the American people's lives with regard to healthcare -- he called it a social justice issue and a moral issue."

There was more red meat for progressives like Grijalva in the speech than Obama has thrown around lately; he called out Republicans for the crushing debt racked up by George W. Bush's tax cuts and the wars in Iraq and Afghanistan, neither of which were paid for by spending cuts in the budget -- which the healthcare plan would be. The ovations his applause lines drew from the wide Democratic majorities in both houses of Congress propelled Obama along, giving the speech a campaign rhythm at times, and he seemed more assured, more confident than he had over the summer.

That may have been by design. Aides said the talk was intended to be direct. "The president has a plan," one senior administration official said. "He believes it's the right plan. He wants the Congress to pass the plan, and he thinks the Congress will pass the plan."

That might have seemed impossible a few weeks ago, but maybe not anymore. A late August poll by the Kaiser Family Foundation found the summer-long town hall battles bruised, but didn't sink, public support for the reform plan. And slightly less credible insta-polling after the speech found support jumped up significantly. Obama will hit the road this weekend for an event straight out of his 2008 campaign playbook -- a big rally, at the Target Center in Minneapolis. What Congress comes up with on healthcare reform, and even whether they come up with anything, still remains to be seen. But Wednesday's speech was the surest sign of hope that the cause has seen in quite some time.