Love in the time of terrorism

Sept. 11 ruined countless lives. Should I feel guilty that it changed mine irrevocably -- for the better? 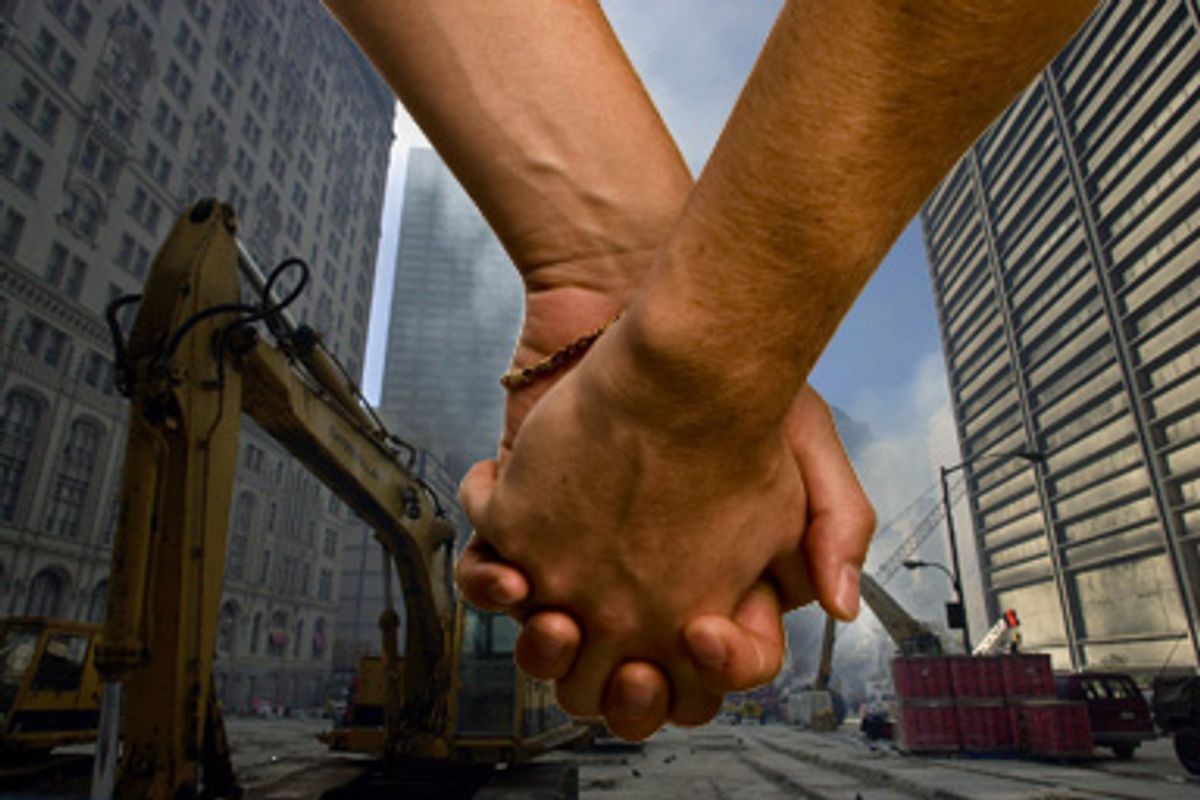 I don't remember how or exactly when I proposed to my wife, but I know it was sometime in the days after the sound of the second plane's impact woke us up on the morning of Sept. 11. She was living in a fifth-story walk-up in Park Slope, Brooklyn, and from the window over her bed we had an unencumbered view of the towers -- although before that morning we had barely noticed they were part of the view. I don't know what was said, or even how it was said, but we came to an agreement that we would marry and move from Brooklyn to Philadelphia. There was no candlelit dinner with a ring hidden in a pastry. In fact there was no ring at all, nor was there any sort of dramatic Jumbotron proclamations of love. That fall had provided us with enough dramatics. All we wanted was something quiet and hopeful to brighten the sad malaise that occasionally fell over us during those months. We were at my apartment. We were lying on my comfortable old couch covered in a thousand mysterious stains. We were probably watching the endless stream of news coverage about the aftermath. She may have been crying. I really can't recall. We had only been dating for five months.

I sometimes wonder if, initially, we got engaged as a way to distract ourselves from the nightmare smoldering just across the East River. Which, in retrospect, seems like a silly reason to wed. But I wanted security that went beyond increased measures at the airport.

She and I saw “The Fellowship of the Ring” several times that fall. The Orc-tacular world of Middle-earth was an exceptional refuge from the grim realities of post-9/11 New York. During an empty weekday night showing, we took an intermission; while the hobbits spent a creepy and tedious half-hour in the House of Elrond, we made out in one of the ladies' room stalls. We were drinking the 40s of malt liquor we had smuggled into the theater (there was a lot of drinking in the months after the attacks) and waiting for our furry-footed friends to ditch Rivendell and start fighting the minions of Saruman when my fiancée glanced down behind the toilet and noticed a wad of money someone had dropped. On that particular evening escaping with Frodo and company garnered us 40 slightly damp dollars and a healthy respect for not drinking malt liquor too quickly.

My wife was working as a bartender and I was working as the smallest, most out-of-shape bouncer in New York City. Most of the money we were earning, which was not much, was going directly to saving for our move to Philadelphia, but we took our newfound bathroom windfall as a sign and put the carefully dried bills toward a down payment on a pair of $120 engagement rings we found in the used jewelry store across the street from the bar where we were working.

We later found those same rings advertised in some of my comic books from the late 1960s and early 1970s. To this day I consider those rings to be the best $40 I've ever spent, even though we eventually had to stop wearing them because they turned out to be oddly painful and discolored our fingers.

On March 26 we eloped, leaving Brooklyn for a small city nestled on the Hudson River in upstate New York. It was one of those towns upstate that seemed to have died long ago -- aside from a dazzling waterfront it resembled the more bombed-out parts of North Philadelphia. The mayor of the little burg, a lovely man who I hope is never indicted for anything, was set to marry us at 2 p.m. We arrived at City Hall 45 minutes early and petrified. I'm a nervous eater so we killed time in a local pizzeria, and to our surprise, we discovered the place was packed with New York City firemen.

This was not an unfamiliar sight for us since the firemen and construction guys from ground zero would drink at the bar where we worked during their breaks. As far as we could tell no one cared, and neither did we. One of the firemen from the bar gave my wife a small piece of the towers for taking care of his crew with drinks and chicken wings. He said being able to hold a part of the towers in your hand provided people with some sort of comfort. That may be true, though it never worked for me.

But as used to large groups of firemen as we were, discovering a busload of them in this crappy upstate pizzeria on the day we were eloping -- that was unexpected.

It turned out we were getting married an hour before the funeral for one of the last firemen recovered from ground zero. He had lived in this upstate town and commuted into the city for his shifts. All the pomp and circumstance we had come to sadly associate with Fire Department funerals following the attacks -- the elegant color guards and firemen flown in from across the country -- were nowhere in sight. After seven long months of solemn ceremonies, all that was left was this ragtag group of exhausted firemen, so jaded to the tragic routine of burying friends that all they could talk about was the crappy drive up from the city. As we talked to them about what we were about to do they seemed to brighten a little.

“Did you get those rings out of a Cracker Jack box?” an older guy asked us. Another suggested they'd be attending his funeral if he had given his wife a "cubic zirconium" that small. Some offered to distract my fiancée while I made a last-chance escape. Others suggested she might consider spending some time with a New York City fireman before committing to a clearly lesser being. They ragged on us for getting married in this depressed little town. "You guys really wanna start your life together in this shit hole?" they asked. It was loud, it was raucous, and it took everyone's minds off of what came next. Several of them asked if they could come to the "ceremony" and be witnesses. We told them we'd be honored. I was not surprised when none of them showed up. My wife and I moved to Philadelphia two months later.

Over the last eight years I sometimes feel as though we have started our life and built our family in "the shadow of no towers," as Art Spiegelman puts it. It is an odd feeling to think that without the events of that September morning I might not have my family today. It is hard to reconcile that knowledge with the fact that more than 2,600 families from the Lower Manhattan site alone exist in that shadow without a part of their family because of that same morning. I think there may be many people out there with young families who feel the same sense of confusion.

While 9/11 widows and widowers, my neighbors, were trying to figure out how to sleep in newly empty beds, I was drunkenly making out with my soon-to-be wife at the movies. While mothers and fathers were laying their children to rest, I was laying the foundation for children of my own. I know the events of Sept. 11 affected me in a way some of my peers don't understand, even some of the ones in New York at the same time. I sometimes feel like an asshole who shows up to a funeral for a stranger and cries the loudest, but I can't escape the sense that I owe those strangers something. As horrible as it feels to admit, it was their loss that served as my inspiration, during that crucial moment in my life, for how much I wanted to live.