When Obama told folks who lie about his healthcare plan "I will call you out," who knew he was talking gangsta? 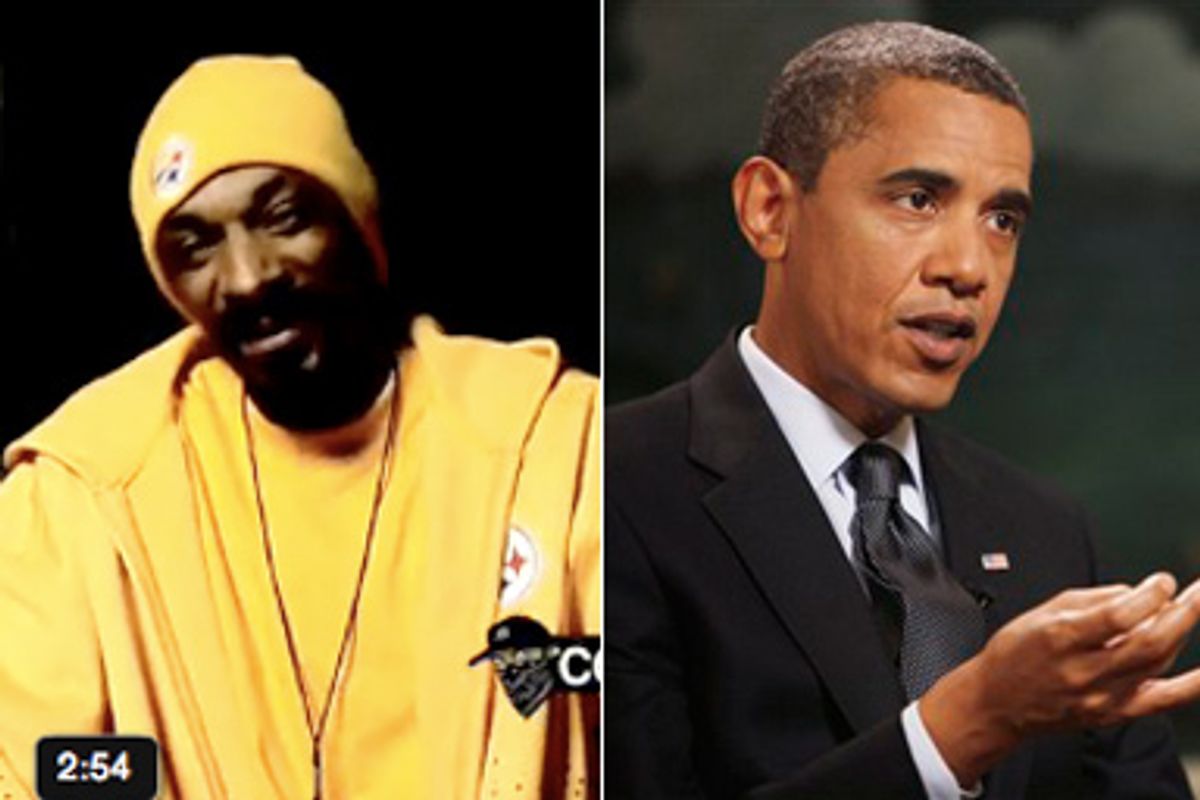 Today in totally gratuitous racial imagery about Obama (we might make it a daily feature):

I've seen lots of creative descriptions of the highlights of President Obama's healthcare speech Wednesday night, but only Reason Magazine's Matt Welch, so far, called him "Snoop Doggesque." Yep. He did.

The piece goes off the rails, though, when Welch talks specifically about a line of the speech I particularly liked. He quotes my tweet about Obama saying that if his opponents kept misrepresenting his healthcare plan, "we will call you out on it," and notes that I said I "love it!" (I did.) Welch didn't love Obama's tough talk; he found it "nearly Snoop Doggesque." And if you weren't sure what he meant -- I sure wasn't -- he helpfully provides a link to Snoop Dogg and TC doing the song: "Shut U Down." You have to watch a little (text continues below):

Every time I think I'm exaggerating the nature of the racial nuttiness that Obama faces, an ostensibly tolerant, smart guy like Welch does something boneheaded like this. What in God's name does Snoop Dogg have to do with Barack Obama (besides the obvious). Snoop's chorus is some variation on, "I run this town, act loud, get wild, we'll shut you down!" Oh, I get it: Obama runs Washington, and he threatened to call out people who lie about his proposals, and ... that's the same thing?

The imagery of the video is pretty great, too. I'm fairly sure I saw Van Jones and Eric Holder; Valerie Jarrett is doing her best Snoop from the Wire impression; you can't even tell she's a chick. No Joe Biden or Hillary Clinton, which really bothers me; I don't think Obama should be running meetings with only his black advisors. That's racist. Plus, it looks like hella fun! Joe's still sulking he wasn't there.

I thought "call you out" was an old dueling term, where you called someone out on the "field of honor," as blogger Heather Michon suggested (on Twitter, where I polled my tweeps). But Urban Dictionary says it's also very common in online gaming and chatrooms for games. I call Obama out as more likely an online gamer than to be hanging with Snoop, Warren G and Nate Dogg. But who knows?

Matt Welch is a nice enough guy. We have mutual friends. That's what makes this strange slur even worse; it's not coming from Beck or Limbaugh, just a nice Libertarian who used to work for the Los Angeles Times. I e-mailed him seeking comment, and here's his reply:

"Huh? There is no stylistic similarity between 'we will shut you down' and 'we will call you out'? Or is it just wrong to make a pop culture reference (which Reason, um, has been known to do now and then) if the referrant and referee are both black?

"I'm from Long Beach, Joan; Snoop Dogg is a hero of mine. I like -- not dislike, but like -- that the president of the United States occasionally talks like people my age, and where I'm from. If you want to paint that as a dumb white-boy outburst, you go right ahead."