How one becomes "crazy" in Washington culture

Politico points to Jim McDermott and David Bonior as the Left's "crackpots" because they tried to stop the war.

Politico has an article on how certain mainstream Republican leaders are worried that "crackpots" are dominating their party's image (h/t reader jv):

“Neither party has an exclusive on whack jobs,” says Republican media consultant Mark McKinnon. “Unfortunately, right now the Democrats generally get defined by President Obama, and Republicans, who have no clear leadership, get defined by crackpots — and then they begin to define the Republican Party in the mind of the general public" . . . .

And then, in the midst of all the catcalls, hand-held signs and “I’m not listening” BlackBerrying, Wilson interrupts Obama’s address to a joint session of Congress by shouting, "You lie!"

While the Republican Party is absolutely dominated by people who are exactly that, is yelling at the President really such a bad act?  Yes, it's "rude" and indecorous, but as Digby says, the President is not a King, even if George Bush was routinely treated as one as people politely wearing critical t-shirts were barred or even removed from various events where His Majesty appeared, including the State of the Union address.

Eugene Robinson today absurdly calls the GOP's disrespectful behavior at Obama's speech "un-American."  Right-wing contempt for Obama is often petty, deeply emotional and ugly -- just like right-wing leaders themselves.   But the demand that the President be venerated and treated as royalty is far more "un-American" than disruptive transgressions of etiquette.  Wilson's heckling was juvenile and dumb, but that's all it was.  If only a fraction of the media dismay devoted to his two-second breach of "decorum" had been directed to, say, rampant presidential lawbreaking, or the implementation of a torture regime, or the slaughter of hundreds of thousands of people in our various wars, we would be much better off.  The American Right is indeed dominated by crazed extremists who often seem barely in touch with basic reality and who are at war with core American political values, but Joe Wilson's irreverence is one of the least significant examples of that, if it's one at all.

As HTML Mencken insightfully noted in what is one of the best blog posts ever written, our political mores demand vehement repudiation of petty acts of incivility (not all, but most) while tolerating and even approving of extremely consequential acts of indecency as long as they're advocated with superficial civility.  Those who use curse words to oppose torture, wars and lawbreaking are evil and unSerious (The Angry Left); those who politely and soberly advocate morally repugnant, indecent policies are respected and Serious.  As long as one adheres to Beltway decorum, one can advocate the most amoral and even murderous policies without any repercussions whatsoever; it is only disruptive and impolite behavior that generates intense upset.  Beltway culture hates "incivility" (public use of bad words) but embraces full-scale substantive indecency (torture, lawbreaking, unjustified wars, ownership of government by corporations, etc.).

All of that leads to the most interesting and revealing aspect of the Politico article.  Needless to say, no establishment media outlet is permitted to write an article that includes criticisms of "one side" without emphasizing that the criticisms apply just the same to "the other side" -- regardless of whether that's actually true.  That's what "balance" means.  Thus, Politico publishes an article discussing the fact that the Right is dominated by crackpots and it is therefore required to claim that the Left is, too.  Here are their examples to provide the balance needed so as to not upset Matt Drudge and Rush Limbaugh:

Nor are Democrats strangers to having their crazy uncles take center stage. During the run-up to the Iraq war, for example, Reps. Jim McDermott (D-Wash.), Mike Thompson (D-Calif.) and David Bonior (D-Mich.) famously flew to Baghdad, where McDermott asserted that he believed the president would "mislead the American public" to justify the war. The trip made it a cakewalk for critics to describe the Democratic Party as chock-a-block with traitorous radicals.

That's one of the most amazing passages I can recall reading.  Even now -- when everyone knows that the President did exactly that which Rep. McDermott, in 2002, said he was doing:  "misleading the American public to justify the war" -- those who pointed out that truth are deemed "crazy."  Here's what that "crazy traitorous uncle" McDermott actually said, as reported back then by The New York Times:

Democratic congressmen who are visiting Iraq this week stirred up anger among some Republicans when they questioned the reasons President Bush has used to justify possible military action against Iraq.. . .

Speaking of the administration, Mr. McDermott said, ''I believe that sometimes they give out misinformation.'' Then he added: ''It would not surprise me if they came up with some information that is not provable, and they've shifted. First they said it was Al Qaeda, then they said it was weapons of mass destruction. Now they're going back and saying it's Al Qaeda again.''

When pressed for evidence about whether President Bush had lied, Mr. McDermott said, ''I think the president would mislead the American people.'' But he said he believed that inspections of Iraq's weapons programs could be worked out.

''I think they will come up with a regime that will not require coercive inspections,'' Mr. McDermott said, anticipating meetings on Monday between Hans Blix, the leader of the United Nations inspection group, and Iraqi officials.

''They said they would allow us to go look anywhere we wanted,'' he said of the Iraqis. ''And until they don't do that, there is no need to do this coercive stuff where you bring in helicopters and armed people and storm buildings.''

''Otherwise you're just trying to provoke them into war,'' he added.

Totally insane!  Get the butterfly net.  The members of Congress who actively tried to stop this murderous invasion by traveling to Iraq and seeking to negotiate a deal for weapons inspections are the "crackpots."  By contrast, who are the sane, mainstream, Serious Republicans cited by Politico who are worried about their party being taken over by extremists?  The people who cheered on the invasion of Iraq based on the need to root out imaginary WMDs and ties to Al Qaeda (e.g.:  PNAC signatory Vin Weber, Iraq War cheerleader John Cornyn, John "Iraq causalties a small price to pay" Boehner).  So everything Jim McDermott said turned out to be true and he's the crazy-loser-crackpot-radical -- just like that crazy, insane, traitorous former Marine Scott Ritter, who babbled insanities like this in the Fall of 2002, while super-sane-and-patriotic. war-justifying,  tough-guy experts Jonah Goldberg and Peter Beinart laughed at him on CNN for being so naive and corrupt:

My country seems on the verge of making an historic mistake . . . . My government is making a case for war against Iraq that is built upon fear and ignorance, as opposed to the reality of truth and fact.

As someone who counts himself as a fervent patriot and a good citizen of the United States of America, I feel I cannot stand by idly, while my country behaves in such a fashion. . . .

We, the people of the United States, are told repeatedly that we face a grave and imminent risk to our national security from a combination of past irresponsible behavior on the part of Iraq and ongoing efforts by Iraq to re-acquire chemical, biological and nuclear weapons and long-range ballistic weapons ... which have been banned since 1991 by a Security Council resolution.

The truth of the matter is that Iraq is not a sponsor of the kind of terror perpetrated against the United States on 11 September, and in fact is active in suppressing the sort of fundamentalist extremism that characterizes those who attacked the United States on that horrible day. . . .

The truth of the matter is that Iraq has not been shown to possess weapons of mass destruction, either in terms of having retained prohibited capability from the past, or by seeking to re-acquire such capability today...

Iraq must loudly reject any intention of possessing these weapons and then work within the framework of international law to demonstrate this a reality.

The only way that Iraq can achieve this is with the unconditional return of UN weapons inspectors, allowing such inspectors unfettered access to sites inside Iraq in order to complete the disarmament tasks as set forth in Security Council resolutions...

What a crazy extremist loser he is.  To recap:  everything the Republican leaders said about Iraq turned out to be false, fictitious, imaginary -- and their false-pretense war led to the deaths of hundreds of thousands of innocent human beings.  Yet they're the sane, sober, Serious ones trying to ensure their party isn't dominated by the right-wing version of crazy traitorous losers like Jim McDermott, David Bonior and Scott Ritter.

This is perfectly reflective of the prevailing Beltway mindset.  One would be, I'd bet, hard-pressed to find many establishment journalists who reject the notion that war opponents like Jim McDermott are crazy, unSerious extremists while the Right's war proponents are still Serious and credible on national security.  Even after everything that's happened, anything associated with "the Left" is, for that reason alone, discredited and unSerious in the media mind [The Washington Post's Paul Kane finds an excuse to spit scorn for what he calls "the Far Left" in virtually every online chat he does; from yesterday:  "No one else is gonna be switching parties any time soon, not after the way liberal Democrats have greeted Arlen Specter. . . . Why on earth would any Republican want to switch parties just so they can get attacked by the far left of the Democratic party?"; does anyone know what mean and terrible things "the Far left" did to poor Arlen Specter that scared everyone?].

That's why we continue to fight wars endlessly and will almost certainly continue to do so -- even as Al Qaeda turns into little more than a scary image and myth.  The Washington Post now appears to be having a hard time deciding if we should attack Iran or Venezuela next.  Our political culture is embedded with the notion that "war" is inherently right, good, important and Serious.  Those who advocate it are deemed intrinsically more Serious than those who oppose it, no matter what the war is or what its justification might be.  And our leading institutions are all designed to benefit from more wars rather than fewer.  Here is what Leslie Gelb -- former enthusiastic Iraq war supporter and President Emeritus of the Council on Foreign Relations -- wrote in the current issue of Democracy Journal:

Gelb is certainly right -- as I've written before -- that America's "Foreign Policy Community" is centrally designed and incentivized to justify and cheer on wars.  But it extends far beyond that.  That's the central premise of our political culture generally.   When it comes to credibility, supporting wars trumps everything -- including truth.  Nothing illustrates that better than the fact that Jim McDermott and those like him are considered "crazy" -- still -- while those who supported the disaster of Iraq are highly respected and credible.

UPDATE:  As happens so often on so many topics, Tom Tomorrow's cartoon this week perfectly illustrates the "craziness" balance discussed here (click image to enlarge): 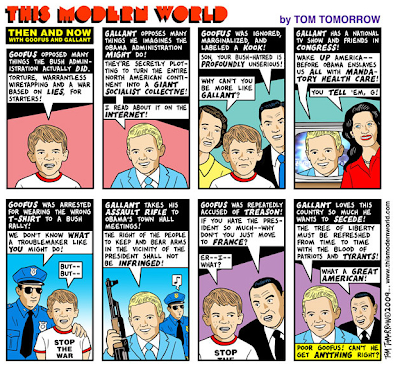