Glenn Beck is the future of literary fiction 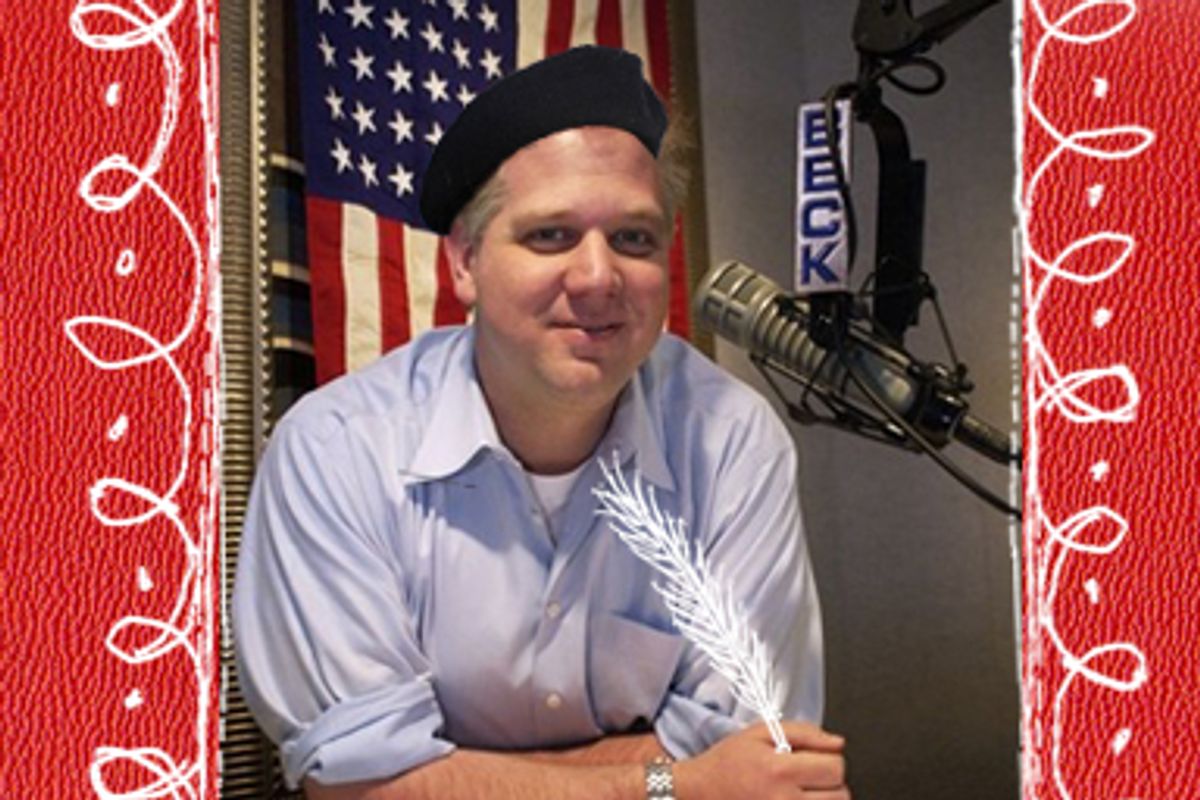 For lovers of great literature, as well as rational political discourse, the New York Times Bestseller List can be a depressing place to visit.

For the past nine months, ever since a certain somebody seized the White House, conservative pundits have dominated the ranks of nonfiction. There have been plenty of golden oldies, such as Bill O'Reilly ("A Bold Fresh Piece of Humanity"), Ann Coulter ("Guilty"), Bernard Goldberg ("A Slobbering Love Affair") and Joe Scarborough ("The Last Best Hope"). But it's the relative newcomers -- Glenn Beck, Mark Levin, Dick Morris and Michelle Malkin -- who've put a stranglehold on the top 10.

It would be easy enough, and rather predictable, to lament this state of affairs and to find in it evidence of an anemic literary culture, a dangerously aggrieved minority, or at the very least the diabolical efficacy of bulk sales.

But such liberal cant totally misses the point. Having spent the past two weeks in what I might call a spiritual communion with these authors, I can assure you that these texts are not the psychotic, fact-challenged rants of the mad, but carefully crafted metafictions in which the mundane terrors of cultural dislocation are recast as riveting epics of paranoia.

As such, they fit into a long literary tradition, one that extends from the rhapsodic delusions of "Don Quixote" to the airborne toxic events of Don DeLillo, from the surreal prophecy of Revelation to the post-apocalyptic visions of Cormac McCarthy's "The Road." Though written in different eras and wildly divergent styles, these works are all about the incursion of sinister forces on an unsuspecting populace.

Which brings us back to Beck and Co. Rather than accepting the standard narrative -- that a disillusioned electorate rejected eight years of conservative mismanagement in favor of a pragmatic (and frankly wonky) Democrat with an inspirational pedigree -- they have created a vivid "counternarrative" in which the events of November 2008 represent a coup d'état. Actually, Malkin regards the arrangement as an oligarchy, while Levin goes all in with nascent totalitarianism. Either way, you get the point. The point is danger, urgency, what we in the fiction biz call "stakes."

"Glenn Beck's Common Sense" (No. 1, nonfiction paperback, 13 weeks on the list) is perhaps the boldest of the lot, which should come as no surprise. Anyone who has seen his syndicated TV show or his infamous YouTube tirades knows that Beck is a wildly imaginative performer, a man who weds the operatic impulses of the demagogue to the grim mutterings of the conspiracy theorist.

His tract, accordingly, takes the form of a direct address to the reader, in which he seeks to reassure us that he too feels a "creeping sense that SOMETHING JUST DOESN'T FEEL RIGHT. America has let thieves into her home ... Our country is about to be stolen ... Open your eyes ... These people are robbing us blind. They have set our house on fire and blocked all the exits." In short, Eeeeeeek!

We might take this as a textbook example of what Richard Hofstadter called, way back in 1964, "the paranoid style in American politics." Except that Beck is not a politician. He's an entertainer, in this case a writer indulging in a mischievous satire narrated by his energetic counterpart "Glenn Beck."

"Paranoia is a dominant concern in modern literature," John Farrell observes in his trenchant "Paranoia and Modernity: Cervantes to Rousseau," "and its peculiar constellation of symptoms -- grandiosity, suspicion, unfounded hostility, delusions of persecution and conspiracy -- are nearly obligatory psychological components of the modern hero." Ladies and gentlemen, I give you "Glenn Beck," modern hero.

The most striking aspect of Beck-as-narrator is his acute racial neuroses. It's not just that he compares Joe the Plumber to Martin Luther King -- heck, that's meant to play for laughs. It's his veritable obsession with slavery, specifically the likelihood that he (and his children and you, the reader, and your children) will be enslaved.

How will this happen? "Glenn Beck" won't say exactly. After all, he needs to leave room for a sequel. But here's a hint: It has something to do with universal healthcare.

At first glance, Mark Levin's "Liberty and Tyranny" (No. 9, nonfiction hardback, 23 weeks on the list) bears a striking resemblance to "GBCS." Just as Beck looks to Thomas Paine's pamphlet for inspiration, Levin -- a lawyer turned radio host who served as chief of staff to Ronald Reagan's attorney general, Edwin Meese -- cites the Constitution and the Federalist Papers. Both authors envision the nation's infancy as a Golden Age, in which rich white men enjoyed the perks of moral heroism. They got to throw off the yoke of imperial tyranny and draw up the rules of governance, without ever once having to worry about being enslaved.

But whereas "Glenn Beck" hollers from the soapbox, "Mark Levin" whispers from the shadows. One feels the gentling hand of erudition in his prose. Reading his book is sort of like hearing "Animal Farm" as told by Dick Cheney.

"Modern liberalism," Levin writes, "promotes what the French historian Alexis de Tocqueville described as soft tyranny, which becomes increasingly more oppressive, potentially leading to a hard tyranny (some form of totalitarianism)." It's just a matter of how hard you rub it, I guess.

While "Glenn Beck" seems almost touchingly reluctant to identify his villains by name, "Mark Levin" has no such compunction. The leftist takeover took root, he asserts, during the Great Depression, which Franklin Roosevelt used as a flimsy pretext to subvert the Constitution.

And here's where our learned narrator turns away from the dull platitudes of historical fact and instead launches the reader into the exhilarating fictional pastures of persecution. Roosevelt's New Deal reforms, you see, were not about helping citizens avoid hardship. Nor were the Great Society programs designed to aid the disenfranchised. They were about consolidating the powers of the State.

The seeds of sedition sowed by these so-called Liberal Statists will be reaped by the Obama administration. Here's a brief list of what they intend to do:

* Tax your personal carbon use

The tantalizing beauty of a "Mark Levin" text resides precisely in this ability to attribute any crisis of State to its nefarious indulgences. The current economic meltdown, for instance, should not be blamed on the psychotic greed of Wall Street, but on the State's deranged need to throw money at the poor and undeserving.

The greatest risk of all is healthcare reform, which will allow the Statists to control "not only the material wealth of the individual, but his physical well-being." Without vigorous dissent there shall arise a "politburo in which political appointees" and their bureaucratic minions decide "who lives and dies." (Note to all Obama Statists: Novelist "Mark Levin" issued this warning back in March.)

Clinton consigliere turned Fox News prognosticator Dick Morris sounds the same siren in his recent opus, "Catastrophe," co-written with Eileen McGann (No. 8 nonfiction hardback, 10 weeks on the list). As a stylist, Morris tends toward the tropes of pulp. His narrative has a sort of devil-may-care recklessness to it, as one might expect from a guy whose résumé includes titles such as Tax Cheat, Toe Sucker of Whores and, perhaps most embarrassingly, Political Consultant.

That said, the man has studied his Tom Clancy. He knows that the best way to capture the modern reader is by ratcheting up the threat level. Obama will (of course) usher in an era of socialism. But he will also set terrorists free among us, allow Muslim law to take over the country, and repeal the Declaration of Independence. Then it's on to Year 2.

It's sometimes hard to tell whether Morris is crafting a canny parody of right-wing dementia, or an ironic thriller. The wonder of this breathless novel is that it manages to be both.

Blogger/columnist Michelle Malkin pulls off the same feat with her newest, "Culture of Corruption" (No. 1 nonfiction hardback, five weeks on the list). On the surface, this is one of those transparently mercenary clip jobs, patched together via large doses of Red Bull and Google, and delivered to the publisher by an ink-stained intern. The book chugs along on the fumes of innuendo for 40 pages, until, at last, we arrive at Chapter 2, the piquantly titled "Bitter Half: First Crony Michelle Obama." The beloved first lady, we learn, "was literally born into the Chicago political corruptocracy." It is here we start to discern the true intent of our avid narrator "Michelle Malkin": She is crafting a scathing satire of feminine envy.

In fact, she can't help casting herself as a kind of doppelgänger. She, too, is a woman of color, a mother of two, a no-nonsense breadwinner. As she sets out damning aspersion after aspersion, the reader starts to catch on: It is "Michelle Malkin" who should be our first lady! Instead, she has been forced to scrap out a living on racial self-hatred and frantic opportunism. No wonder it drives her mad to see the dignified Madame Obama ascend so effortlessly to the seat of power.

Alas, our courageous narrator's animus keeps getting the best of her. She's not just enraged, but aroused. Michelle the Merciless, or "That Other Michelle," as she's known in Malkin's home, has become her forbidden love object!

It's the sort of hilarious and subversive twist one would never expect from a second-tier pundit. But such is the brilliance of the modern conservative literati. While liberal scribes earnestly prattle on about the necessity for good policy in the face of global warming and peak oil and blah-blah-blah, the authors of the right have long since abandoned this outdated "reality-based" model. The reader's heart is captured, after all, not by an adherence to the murky truths of the known world, but by the ecstatic possibilities of the imagined. Are these gifted artists to be reviled for writing prose that gratifies the most cherished and depraved sentiments of the body politic?

I say no. And I further suggest that those literary historians who hope to understand the salient psychology of our age put aside their Updikes and Morrisons in favor of Becks and Malkins. They don't just rule the bestseller lists, people. They own the future of belle lettres as well.