Fear of a gay planet 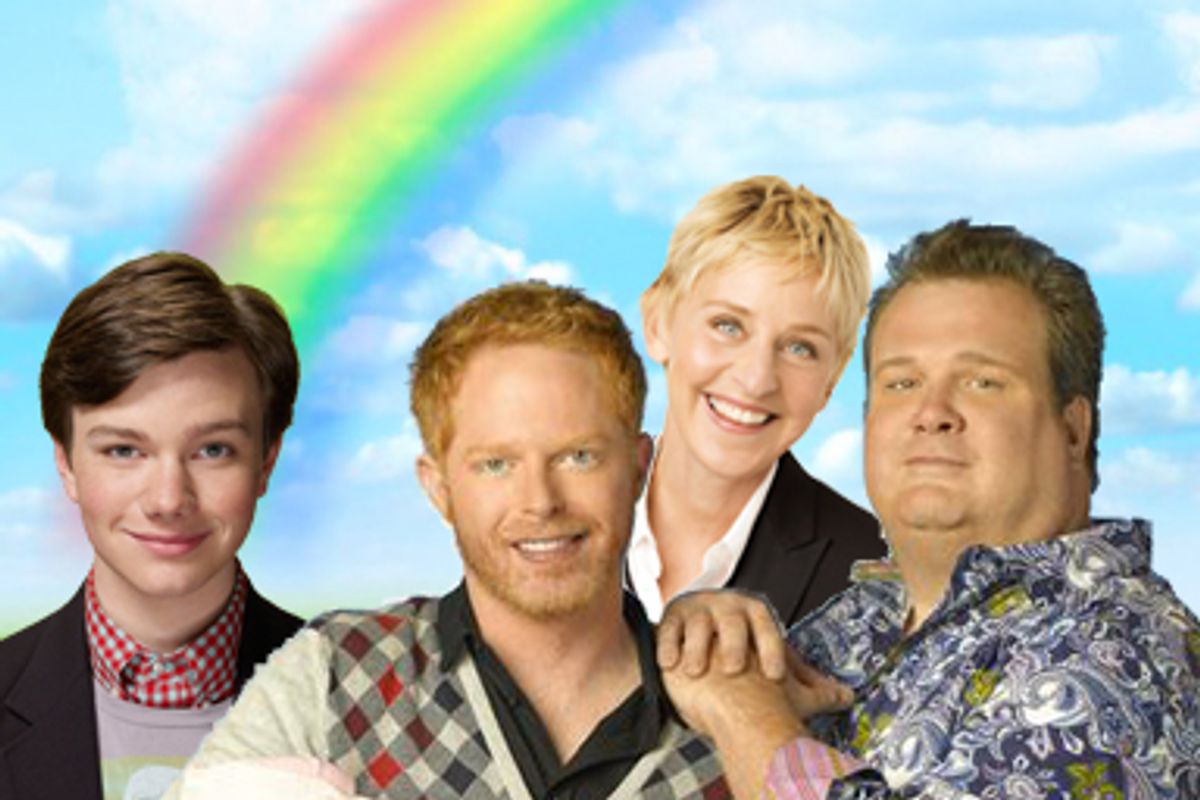 I'm glad there are more gay characters on TV these days. But I don't want to single the gay ones out, because that would imply that I think gay people are different than everyone else. They're not different! Gay people are just like straight people, only they're smarter and funnier and more interesting.

Also, they smell better. They've read more books, sure. And they have more friends -- that part isn't surprising. Because they're better educated, generally speaking, and also a little wiser. Like blondes, they have more fun.

When people talk about homos taking over the planet, my heart races a little faster. A planet ruled by gays! Imagine how good the scones will be!

Plus, there'll be prettier yards, less crime, more funding for the arts but less bad poetry, fewer rude, disheveled dogs roaming loose on the streets, and less weak coffee. I'm guessing there aren't many gay Hummer owners. McMansions would surely fall out of fashion, along with miniblinds, vinyl siding and Applebee's.

Everyone would be grumpier and bossier on the outside, but more kindhearted deep down inside. Complaining about your crappy day would become an acceptable form of filibustering in Congress. Neglecting your houseplants would become punishable by law.

What, now I'm just making sweeping generalizations? Now it's obvious that I think gay people are silly and overly fixated on trivial matters and other likable things like that? Now I'm just pandering to the future global elite in the hopes that I might one day fill some token fag hag post in the cabinet?

I can't help it. I've been idealizing gay people ever since I moved to the Castro, in San Francisco, at the tender age of 25, where I was surrounded every day by beautiful, fit, talkative men. Suddenly I knew how Captain Kirk felt when he was beamed down onto a planet of gorgeous lady aliens who were nonetheless impatient with his dull earthling ways. Sure, I've been urged over and over again not to assume that all gay and lesbian peoples of the globe are wickedly witty and charming and fun-loving and smart, but each new gay person I meet only further clouds my vision with his/her general-purpose excellence and flair.

This is the trouble I smell on television this fall, where token gay characters have replaced token black characters as the marginalized peoples du jour. By depicting gay people as they really are -- intelligent, attractive, self-possessed -- modern-day televisual narratives run the risk of misinforming the public about the fact that many gay people are slovenly, slow-witted and boring. I would personally launch a public awareness campaign to inform the populace that Gay People Are Stupid And Uninteresting, Too -- I just can't find any stupid, uninteresting gay people to help me enlighten the masses.

Meanwhile, the networks continue their campaign of misinformation by featuring highly charismatic token gays on their shows. There's Eric (Connor Paolo), Serena's little brother on "Gossip Girl," and Mo-Mo (Haaz Sleiman), Jackie's trusted confidant on "Nurse Jackie." And on the new shows this fall, token gays are moving front and center, from Kurt (Chris Colfer), a confident, talented member of the show choir on Fox's "Glee" who nonetheless gets tossed into a dumpster every morning by the football team (although that's about to change) to Mitchell (Jesse Tyler Ferguson) and Cameron (Eric Stonestreet) on ABC's "Modern Family," a gay couple who adopt a baby girl from Vietnam and immediately feel self-conscious about it.

Poor Mitchell, alone with the baby as he boards his plane home, elicits coos from fellow passengers until his partner, Cameron, returns with snacks for their adopted daughter. Suddenly the same cooing passengers are averting their eyes. But a rude comment from a woman passing by is what finally sends Mitchell over the edge.

Lady: (to husband) Honey, honey! Look at that baby with those cream puffs!

Mitchell: All right. Excuse me. This baby would've grown up in a crowded orphanage if it wasn't for us cream puffs! And to all of you who judge, hear this: Love knows no race, creed or gender! And shame on you, you small-minded ignorant few ...

Now, granted, this and many of the other jokes surrounding gay couple Mitchell and Cameron are focused on their gayness. They are the token gay characters, after all, so their stories are, predictably enough, rife with stereotypical gay behaviors, like when Cameron has a mural painted on the wall of baby Lily's nursery of himself and Mitchell as angels .

Cameron: I had Andre do it while we were gone!

Mitchell: Is that us, with wings?

Cameron: We're floating above her, always there to protect her.

Mitchell: Well, that's reassuring, right, Lily? Yes, we tore you away from everything you know, but don't worry, things are normal here, your fathers are floating fairies. Can you call Andre? Have him paint something a little less gay? And by the way, we have to stop having friends with names like Andre.

See, if you saw a scene like that, you might imagine that gay men sometimes make outrageous or vaguely self-aggrandizing design decisions, or that despite such flights of fancy, they maintain a sense of humor about themselves and almost seem to enjoy it when other people make fun of them. And that wouldn't be accurate at all, since many, many gay people in the world are incredibly stodgy and not very creative and also quite easily offended. Maybe you don't know any gay people like that, but that doesn't mean they don't exist!

Similarly, when Kurt opens the third episode of "Glee" with a mesmerizingly coy rendition of Beyoncé's "Single Ladies," then tries out for kicker of the football team in an effort to win his dad's approval, but insists on listening to Beyoncé's song right before he kicks the ball, we might end up assuming that gay kids are more unique or even a little more appealing than their straight peers in high school. What could be further from the truth?

What's even more deceptive is that these gay characters -- Kurt and Mitchell and Cameron -- are some of the funniest and most captivating characters on their shows. And what's worse, "Glee" and "Modern Family" are some of the funniest and most captivating comedies on television this fall, so, of course, being small-minded, ignorant assholes, we immediately assume that these shows must be written and staffed by gay people. But that wouldn't be fair, because I'm sure there are plenty of dumb, uninteresting straight people on staff, too.

Flying under the gaydar

Take Ellen DeGeneres. First she proves that she's better than all of the straight people in the world by coming out as gay on her sitcom 12 years ago, something that no straight person in his or her right mind would ever do because we're too ashamed by our mediocrity and our poor hygiene, let alone our sexuality, to reveal anything of note about ourselves in any sort of public setting.

But that's not enough. Next, Ellen tries her hand at the talk show thing (like everyone else on the planet) and not only doesn't fail (like everyone else on the planet) but succeeds with flying colors. She dumps crazy Anne Heche for hot Australian babe Portia de Rossi, hosts the Academy Awards, and just generally succeeds at everything while treating her status as a gay woman as old news (which it is, thanks to the fact that she came out a long, long time ago, before anyone else had the courage to).

And now what does Ellen do? She lands a plum job as a judge on the most popular show on the planet. Is this fair? Hasn't she gone too far, at long last?

Sure, it'll be tough to fill Paula Abdul's shoes. After all, Abdul added a lot to the discussion on "American Idol" when she giggled and rambled on incoherently about how much she loved every single contestant onstage. And also, didn't she have this great rapport with Simon Cowell, where Simon would tease her and she would act all mad and punch him in the arm without saying anything but "Simon!"? Wasn't that fun?

Ellen will really struggle to live up to Paula's legacy. And Lord knows we don't want someone to put Simon Cowell in his place. We'd prefer that Simon (who's as sharp-tongued and as self-deprecating as a gay man, but whose terrible hair gives him away as straight) continue to sleep his way through "American Idol," lulled into a semi-hypnotic state by the inane ramblings of Randy Jackson and Ryan Seacrest. God forbid that Simon be taken out at the knees by someone a little more clever and witty and Johnny-on-the-Spot than he is.

It's a sign of how far Ellen has come in the world, and how much she's changed it, that no one is referring to her as the token gay judge on "American Idol," any more than Randy Jackson is referred to as the token black judge. To America, Ellen is funny first and smart second and lovable third and maybe gay fourth or fifth or sixth (just as Randy is annoying first and repetitive second and boring third or fourth).

And this is how the gays eventually take over the world, you know. They distract us into thinking that they're just like us, when in fact they're far superior. We're subdued into complicity and before we know it, the national anthem is replaced by Cole Porter's "I Get a Kick out of You," the military is marching in classic Bob Fosse formation, and Wal-Mart stops stocking guns and ammo and starts stocking whimsical Dalmatian statuettes and Jonathan Adler throw pillows.

But at least the scones will taste better.