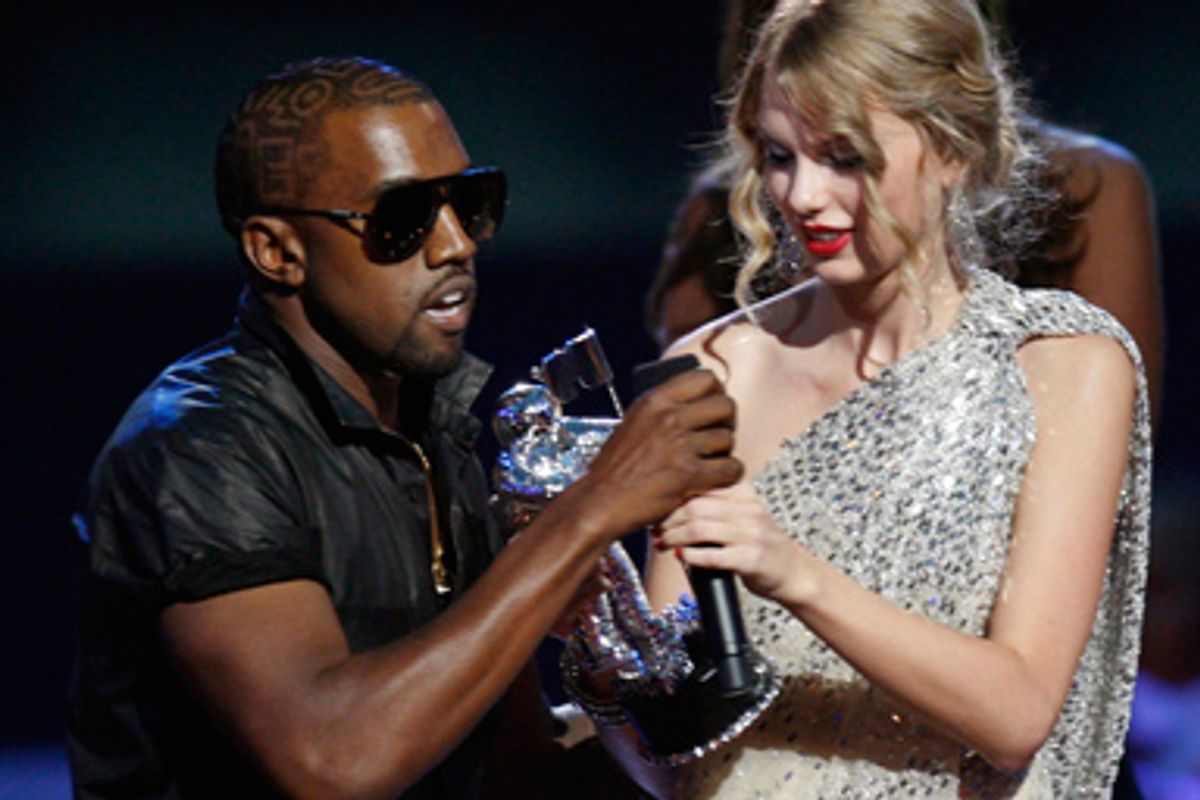 Kanye West takes the microphone from best female video winner Taylor Swift as he praises the video entry from Beyonce at the 2009 MTV Video Music Awards in New York, September 13, 2009.
--

It’s been a year of shocking and deeply saddening deaths. Michael Jackson. John Hughes. Jim Carroll. And the unexpressed thought.

The silent sentiment, which survived from the dawn of consciousness to the birth of Twitter, will be missed. Among its contributions to civilization are the stiff upper lip, the novels of Henry James, and the song "Jesse’s Girl."

It had been languishing for years, hobbled by the blogosphere, Fox News, and in particular the recent spate of town hall meetings. But in the last several days, it received a number of severe blows from which it could not recover.

On Tuesday, reality star and Ed Hardy enthusiast Jon Gosselin went on "Good Morning America" to announce that he loves his 22-year-old girlfriend more than he loved his estranged wife, Kate, throwing in that he now "despises" the mother of his eight children.

That same day, Los Angeles' KCAL-TV aired a tape of married "family values" Assemblyman Michael Duvall in front of an open microphone at a Sacramento hearing, mouthing off to a colleague about his sexual conquests. Because, there is no point in getting a little side action if you can’t brag to anyone within earshot, "So I am getting into spanking her ... Yeah, I like it ... I like spanking her. She goes, I know you like spanking me, I said yeah, that's 'cause you're such a bad girl." Displaying remarkable endurance in the field of TMI, Duvall went on in this vein for quite some time.

Duvall resigned on Wednesday, the same day that South Carolina Republican Rep. Joe Wilson found himself with an impulse that he too could not control. Brimming with outrage during a healthcare speech by the president, blurted the now-famous words “You lie!” Though his display was the vocal equivalent of John Hancock’s signature, let us not ignore the other rumbly voices among our elected officials that night, forced by the sheer magnitude of their righteous indignation to boo while Obama spoke.

On Thursday, following in the tradition of such luminaries as Demi Moore and Alice Hoffman, Lindsay Lohan chose to air her inner pain to the world via the medium of Twitter, alerting one and all that she’s been crying herself to sleep over her ex-love Samantha Ronson’s "cheats, errors."

Saturday night, Serena Williams, tennis great and part-time hothead, earned herself a $10,500 fine for losing her shit with a line judge during a U.S. Open match. When the judge called a foot fault, Williams responded by, among other things, offering to "shove this ball down your f------ throat."

After Williams’ tirade, personal and professional decorum as we know it was placed on life support.

Finally, last night, Kanye West delivered the coup de grâce at the MTV Video Music Awards. The end, ultimately, came quickly and loudly. As Taylor Swift clutched her award for best female performance, Mr. West leapt to the stage, because he had an opinion that ergo needed immediate transmission to the entire world, and took the microphone from Miss Swift. "Yo, Taylor," he said. "I’m really happy for you, I’m going to let you finish, but Beyoncé had one of the best videos of all time! One of the best videos of all time!"

Mr. West had previously attempted to definitively slay restraint with his rants at the American Music Awards, the Grammies, and the European VMAs. Apropos of the now mandatory need to say and do everything in public, West expressed remorse over his behavior on his blog, stating in part, "IM SOOOOO SORRY TO TAYLOR SWIFT AND HER FANS AND HER MOM. … I’M IN THE WRONG FOR GOING ON STATE AND TAKING AWAY HER MOMENT!" He also added, because God forbid anybody quit while they’re ahead, that "BEYONCE’S VIDEO WAS THE BEST OF THE DECADE!" and "I’M NOT CRAZY YALL."

Across the world, reactions to the demise of the unexpressed sentiment were mixed. In the United Kingdom, a few old people said they had no comment. On Facebook, the consensus was best reflected by PartyWhore877, who said, "OMG THAT’S SOOO CRAZEEEE!!! ALSO, I HAVE HERPES AND BONGDOUCHE4455 U NO IT WUZ U!" She then posted a photo of her sores.

The thought is survived by the now defunct profession of mind reading, and the penny, which is no longer valid in exchange for anything in anybody's head.