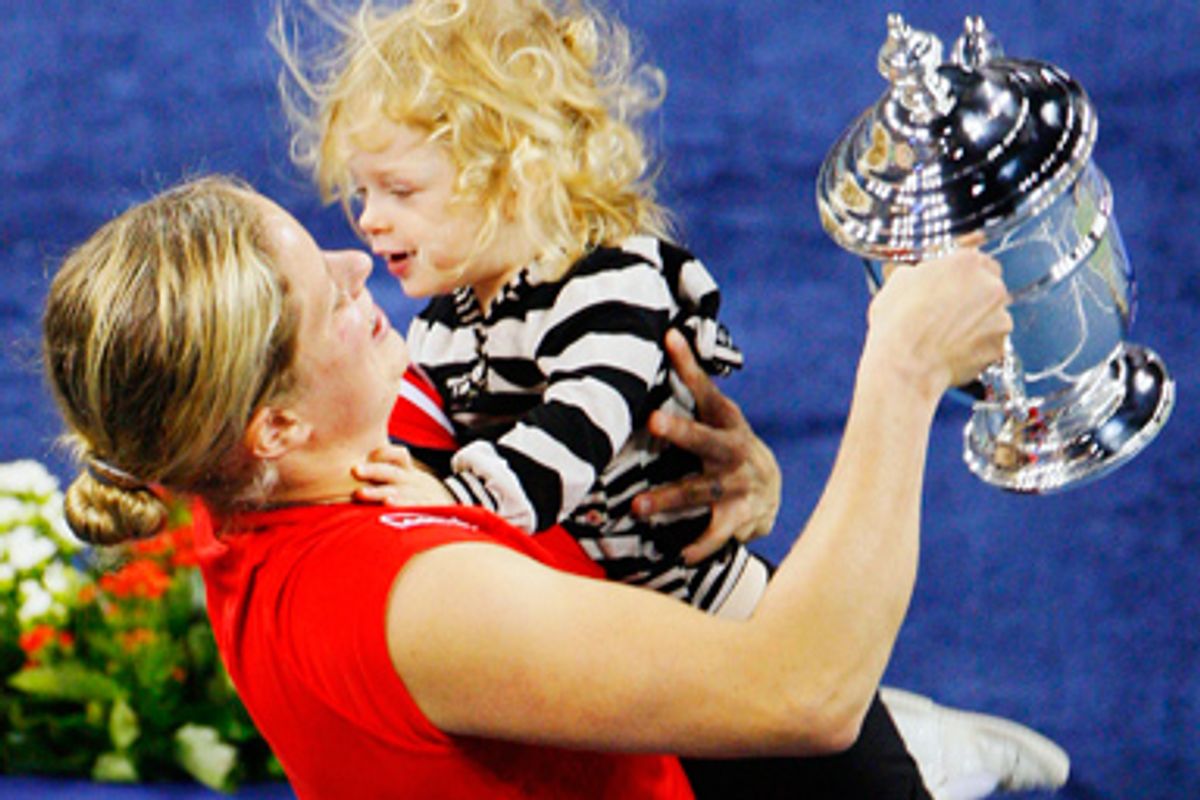 Kim Clijsters of Belgium carries her daughter Jada as she holds the trophy after defeating Caroline Wozniacki of Denmark in the women's singles final match at the U.S. Open tennis tournament in New York, September 13, 2009.
--

Every year on my birthday, after reminding me of the agonizing hours of labor pains she suffered through just to bring me into this world, my mother always tells me that being a mother prepares you for the most difficult jobs in the world.

I guess that includes tennis champion.

Sunday, Kim Clijsters capped off a remarkable comeback by winning the U.S. Open women's title with a 7-5, 6-3 victory over the ninth-ranked Caroline Wozniacki of Denmark. Though this was the 26-year-old Belgian’s second U.S. Open victory, this title was even more impressive than her 2005 triumph. Clijsters became the first unseeded woman to win the U.S. Open and her stunning victory came just 18 months after she gave birth to a daughter. Sunday also marked the first time since 1980 that a mother has won a major tennis tournament.

But Clijsters’ recent motherhood may have actually helped her athletic prowess. While it may seem counter-intuitive at first to think that the dramatic physical changes a woman undergoes while pregnant might have a positive effect on her ability to compete athletically, a growing body of research suggests that the child Clijsters cradled in her arms after the match may have made her a better tennis pro.

The most clear-cut chemical benefit for mother-athletes is the oxygen jump in their bodies before and soon after they give birth. Women experience a significant increase in the volume of blood in their bodies during pregnancy because they are supplying blood for an additional life. And in the first few months of pregnancy, the body creates a glut of red blood cells, which can significantly raise the amount of oxygen a woman's body can bring to the muscles. This means that the effects of pregnancy on the female body can be somewhat similar to those produced by the banned practice of blood doping. A 1991 study found that recent mothers who ran recreationally had as much as a 7 percent increase in oxygen efficiency in their bodies eight months after birth over non-mothers. And pregnancy increases the amount of androgen, relaxin and other hormones in a woman's body, which could help her athletically.

In addition to chemical changes, many mother-athletes have said the grueling ordeal of childbirth made them tougher and more able to deal with the pain of their sport. A 2007 study found pregnancy helped boosted the mental strength of female athletes. Greg Whyte, a professor of applied sport and exercise science at Liverpool John Moores University, told the Times Online that during pregnancy, "Women re-evaluate where they can anchor pain and many psychologists believe that woman’s pain threshold is effectively reset so that when she resumes or takes up training again, nothing ever seems as uncomfortable.”

There may be something to such a correlation: Paula Radcliffe won the 2007 New York City Marathon after giving birth less than a year before and Jana Rawlinson took the 400-meter hurdles gold medal at the world championship's that same year soon after giving birth. Golfer Catriona Matthew won the British Open this year a mere 10 weeks after having her second child. In 1983, Norway's Ingrid Kristiansen ran to victory at the Houston Marathon just a few months after having a child.

The pregnancy-performance link has sparked controversy, as well. There have long been unsubstantiated rumors that females athletes living in East Germany in the 1970s and '80s purposely got pregnant and then had abortions after three months in order to enjoy the blood-oxygen boost.